Fracking cannot fail, but only be failed 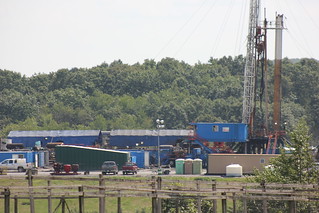 “Four of 10 wells forecast to fail in northeastern Pa.”

We’ve known for a while that fracking wells have serious integrity issues. A couple of years ago Anthony Ingraffea reported (PDF) on extensive well failures in Pennsylvania’s Marcellus shale. In June Ingraffea and a team of researches at Cornell followed up with a study estimating forty percent of Marcellus wells will fail over time. Newer wells appear to show higher leakage rates than older ones, so structural integrity is an increasing risk. Since there is no financial or regulatory incentive to build them well, they are getting less and not more reliable. The team also noted that the oil and gas industry was not exactly forthcoming on this topic:

Due to the lack of publicly available structural integrity monitoring records for onshore wells from industry, more recent studies have used data from state well inspection records to estimate the proportion of unconventional wells drilled that develop cement and/or casing structural integrity issues.

This is terrible, but at this point it is not news. So it was a little surprising Monday to see a new study about the structural integrity of fracking wells getting lots of play. Not that I’m complaining – better late than never – but it just seems like something to be treated as further confirmation of what we already knew, not some startling new discovery.

To her credit, Becky Oskin brought up the prior study and framed it in context. Mose Buchele of StateImpact Texas didn’t bring in the Marcellus angle, though maybe it’s outside his scope. A couple other reports really missed the mark though, and for the same reason: an industry-friendly framing of the scope of fracking.

From an environmental, policy, and public health perspective, fracking ought to be viewed as any activity in the entire industrial chain of unconventional natural gas extraction. Silica sand mining in Minnesota is fracking. Its transport to sites is fracking. The drilling of the well is fracking, the extraction from the well is fracking, the transport of the gas is fracking, and the storage of the toxic byproducts – until the last molecule goes inert – is fracking. Calling just the extraction of natural gas fracking is misleading at best and deceptive at worst, because that thing could not exist without all those other things. For anyone who cares about the entire impact of the process, it is absurd to characterize one part as the entirety.

Yet that is just what Matt McGrath of the BBC did, in an article headlined “Weak wells not fracking caused US gas leaks into water.” His article largely gives a pass to the industry, at one point flatly stating: “In none of the investigated wells was there a direct link to fracking.” As though those with contaminated water will be relieved the reason was shoddy practices by the industry and not something intrinsic to drilling. Ben Geman’s piece similarly leads with that framing: “They found that problems with gas-well construction, not fracking itself, is letting gases escape and reach drinking-water wells in some cases.”

Geman does a good job including caveats, and towards the end argues against exactly the framing he uses at the top: “the issues of water quality and fracking can’t be considered in isolation regardless of what’s allowing contaminants to escape.” But it’s damned frustrating to see what most people will take away – the headline and the start of the article – make the opposite point.

It could be that McGrath and Geman were too quick to accept a carefully parsed description from one of the authors:

“These results appear to rule out the possibility that methane has migrated up into drinking water aquifers because of horizontal drilling or hydraulic fracturing, as some people feared,” said Prof Avner Vengosh, from Duke University.

The team attempted to isolate a single variable and examine it, which they did, and they reported the results. All well and good. But outlets like the BBC and the National Journal report on a PNAS paper in the public’s interest. In other words, the important thing here is not the “horizontal drilling” part but the “methane in drinking water” part. So a study that exonerates one part of the process, but that says nothing about another (already-known) reason for contamination, gets us exactly nowhere in terms of its importance for the average citizen.

Maybe the reporters were swayed by the optimistic recommendations from the researchers. McGrath: “‘You need strong rules and regulations on well integrity,’ said Prof Jackson.” Geman: “[Ohio State earth-sciences professor Thomas Darrah] said that the findings are ‘relatively good news’ because ‘most of the issues we have identified can potentially be avoided by future improvements in well integrity.'” I don’t see how an industry that pushes through anti-transparency exceptions, buys politicians left and right, routinely outpaces the ability of agencies to monitor it, requires omertà for regulators but has a revolving door for them when they leave, violates the law yet continues to operate with impunity, doesn’t have sound construction practices elsewhere, and has a corrosive effect on democracy itself is going to embrace strict new rules on well construction.

That seems to be an important bit of context for the story. Leading with an (at best) incomplete framing and following up with hopeful policy prescriptions from scientists seems more likely to misinform readers than enlighten them. Because here is the message that comes across: There is a great and wonderful theoretical version of fracking out there we all should believe in, and any failure to see it in the real world is the fault of those who don’t share the vision, not of fracking itself. Yet somehow the fracking we end up with always ends up being so much worse than the fracking we are promised. Maybe someone could write an article about that.

Fracking cannot fail, but only be failed