We Are Arming All Sides 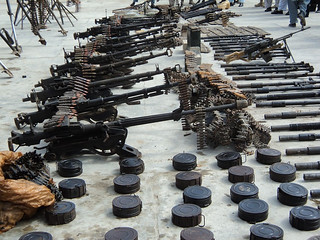 If we just pour enough weapons into the region peace will magically emerge.

Previously, we armed rebels in Libya. That helped overthrow the dictator there but also destabilized the country. As a result of the instability in Libya, a number of these weapons appeared in conflicts in other places like Mali and Syria.

Of course, even if the “moderate” rebels beat ISIS there is no guarantee some group(s) within these rebels, now heavily armed with American weapons, won’t use this newly gained firepower to takeover using tactics we find equally horrific. If that happens, I assume we will then send even more weapons to their opponents as well keeping the cycle going, hoping that eventually some group we can tolerate ends up briefly on top .

Apparently, if we just pour enough weapons into the region peace will magically emerge.

We Are Arming All Sides