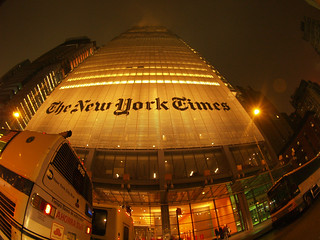 The other day some Grey Lady jackass who had evidently watched a few episodes of “Portlandia” in lieu of research, languidly typed a few hundred words about how, despite the fact that Portland continues to attract young, talented people from everywhere, they were all slackers looking to “retire,” and a reckoning of some sort would soon be coming unless we all changed our shiftless, hippie ways.

Of course, Citylab promptly debunked all, and I do mean all, of the “facts” in the article more thoroughly than I intend to here, but the ignorance of the NYT about what makes cities live or die amounts to either deliberate deception or willful ignorance from the supposed “paper of record.” A steaming pile of neoliberal BS served up as news.

When I was a kid, I would always notice the population figure on the “Entering Portland” signs and they were in the high 200’s, topping 300 only when I was in high school. Thirty years later, it’s nearly 600,000.  Of course, because I’m not a New York Times reporter and have free time to read on occasion, I do know that growing cities are prosperous and shrinking ones are not, pretty much as a rule. Cranes: Good; Abandoned buildings: Bad.

Yes, a lot of really dreadful places are growing, too, but in dreadful ways that are both environmentally unsustainable and corrosive of quality of life.  Portland adopted the scary UN plot of Agenda 21 about 30 years early, and dang it, it worked.

Of course, we only learned from our mistakes: misguided “Urban Renewal” and freeway building decimated historic districts and tore neighborhoods apart, but we stopped one freeway, removed another, and strictly restricted sprawl, which had the happy aftereffect of keeping close-in real estate values (and the urban tax base) healthy.

All of this is pretty much common knowledge, not just to Portlanders but the many who continue to aspire to join us, and yet it managed to elude the dogged reporting skills of a weekend visitor from that hocked building on 42nd street.

I guess I should just be glad it wasn’t Maureen Dowd on a reefer bender; that would have been worse, and is still possible if things go well in November.