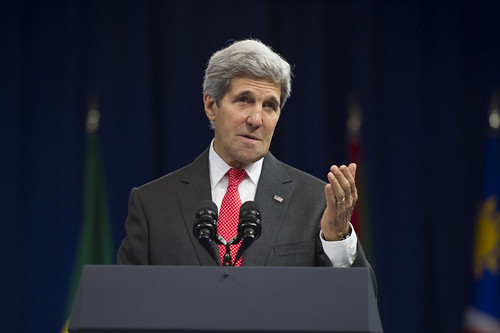 Secretary of State John Kerry told CNN that the strategy for going after ISIS involves “many different things that one doesn’t think of normally in context of war.”

As done in airstrikes in the past month, in what other context do countries normally drop 500-pound laser-guided bombs on a group of fighters seeking to take control of territory in a sovereign country? For sport?

How about training and equipping more rebel forces to not only fight an extreme militant group that has overwhelmed them thus far but to also finally topple a brutal regime? All a part of a competition soon to become the next hit reality television show?

The ISIS fighters about to be shelled even more relentlessly will probably think about it as being a war. Most powers in history that have engaged in these kind of operations have been open about the fact that they are at war with an enemy. Obama’s rhetoric certainly sounded like the words of a leader committing to war.

“I have made it clear that we will hunt down terrorists who threaten our country, wherever they are. That means I will not hesitate to take action against [ISIS] in Syria as well as Iraq. This is a core principle of my presidency: If you threaten America, you will find no safe haven.”

“A normal person might conclude a sustained military operation in a new sovereign country meant to destroy a political organization that is expected to take years and billions of dollars would be considered a “war” but not according to our President,” Walker wrote.

It enables the Obama administration to sell and promote escalated military action without having to worry about constitutional limitations or seemingly antiquated legislation like the War Powers Resolution of 1973, which decades ago would have led Congress to push for a declaration of war before allowing the President to commit America to this action.

By no coincidence, Obama likened what is about to take place in Iraq and Syria to what US forces have been doing in Yemen and Somalia. US drones have been firing Hellfire missiles at militants in those countries, and the administration has contended these operations are not part of wars. The strikes are counterterrorism actions and are supposedly legal under the Authorization for Use of Military Force (AUMF) passed by Congress in 2001.

The AUMF was passed to give President George W. Bush’s administration the military authorization to go after individuals or groups that were involved in the September 11th attacks.

Kerry argued that this AUMF applies to ISIS, even though ISIS has split off from the al Qaeda affiliate in Iraq. “This group is and has been al Qaeda. By trying to change its name, it doesn’t change who it is, what it does.”

The administration, according to one senior administration official, believes that ISIS’s position is that the group is the “true inheritor of Osama bin Laden’s legacy.” And this is supported by “some individual members and factions of al Qaeda-aligned groups.

…[T]he fact that ISIS is the “true inheritor” of Bin Laden’s legacy is neither here nor there. In what sense is ISIS the “inheritor” of Bin Laden’s legacy? The only one I can think of is that ISIS represents the gravest Jihadist threat to the peaceful world — a position once held by Osama Bin Laden. Also, the fact that they threaten U.S. personnel and interests is an argument that proves way too much — plenty of other groups do that as well, which isn’t terribly relevant. None of this makes ISIS fit into one of the AUMF categories (planning, aiding, harboring, etc). Simply put, ISIS is not al-Qaeda…

In other words, the administration seems to think it can play Six Degrees of Osama bin Laden and that’s all they need to show the country they can lawfully engage in combat operations against any extreme militant group without additional approval from Congress.

While it may be cliché to call all this Orwellian, there is a passage of George Orwell’s 1984 that is directly applicable to the Obama administration’s position on this not-a-war. It comes from the banned book written by enemy of the Party, Emmanuel Goldstein:

.. The very word ‘war’, therefore, has become misleading. It would probably be accurate to say that by becoming continuous war has ceased to exist…A peace that was truly permanent would be the same as a permanent war. This — although the vast majority of Party members understand it only in a shallower sense — is the inner meaning of the Party slogan: WAR IS PEACE…

US officials do not want to call it war anymore because they recognize that far too many are weary and oppose it. But since they believe war is necessary for security and needed to protect American empire, the Obama administration normalizes war by rebranding such operations as counterterrorism.

However, if war is counterterrorism and counterterrorism operations are a regular occurrence, war becomes ordinary to citizens. It becomes a fact of life. Regular cries from officials that an enemy poses a threat becomes typical, like statements marking national holidays.

Law is forever changed and once cherished liberties are constrained, but people permit it because it brings little shock to the masses, since leadership deliberately calculates its moves so the population adapts.

What becomes extraordinary and strange is peace. Society does not know how to accept anything remotely resembling peace, since the country has been remade to function in a permanent state of war.

Steve Fraser: The Return of the Titans