Our Unrepresentative House Is a Problem Easily Solved 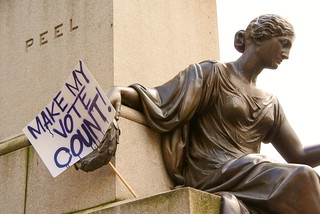 A new round of blog debates about whether Democrats’ biggest problem in the House has been Republican gerrymandering or the fact that Democratic voters tend to be concentrated in urban areas was started by Nate Cohn writing Why Democrats Can’t Win the House. He puts most of the blame on urban concentration. Writers like David Weigel and Jonathan Bernstein have weighed in with rebuttals and more nuanced interpretations.

At the heart of the debate is the serious issue that even though noticeably more people voted for Democrats in the 2012 House elections, Republicans ended up winning a clear majority of seats.

What is disappointingly absent from this discussion is any acknowledgement of how easy it is the solve the problem of gerrymandering and ideological concentration in geographic areas. Political scientists have thought about these issues for a long time and came up with basic solutions decades ago. Several democracies long ago adopted forms of proportional representation to prevent the undemocratic and potentially dangerous outcome of political parties winning elections despite lacking popular support. There are numerous options to choose from including districts plus voting, single transferable vote, and party-list proportional representation.

While some options would require a unlikely constitutional amendment, there are reforms that could be done with only federal legislation. For example, Fair Vote put forward a plan for how to replace single-member House districts with multi-member districts that would significantly reduce these issues. Votes in concentrated ideological areas would no longer be “wasted” so the potential advantage a party could gain with cleverly re-drawing districts would be dramatically reduced.

There seems little value in just talking about problems if we aren’t even going to acknowledge the existence of solutions. Even if their adoption seems unthinkable now, the point of writing should be to get people thinking.

Our Unrepresentative House Is a Problem Easily Solved