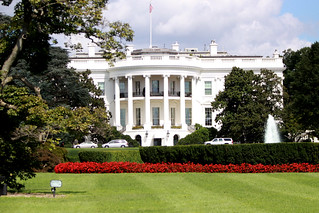 Just over a month before the United Nations convenes on September 23 in New York City to discuss climate change and activists gather for a week of action, the Obama White House Council on Environmental Quality (CEQ) argued it does not have to offer guidance to federal agencies it coordinates with to consider climate change impacts for energy decisions.

It came just a few weeks before a leaked draft copy of the Intergovernmental Panel on Climate Change’s (IPCC) latest assessment said climate disruption could cause “severe, pervasive and irreversible impacts for people and ecosystems.”

Initially filed as a February 2008 petition to CEQ by the International Center for Technology Assessment, the Sierra Club and the Natural Resources Defense Council (NRDC) when George W. Bush still served as President, it had been stalled for years.

Six and a half years later and another term into the Obama Administration, however, things have finally moved forward. Or backwards, depending on who you ask.

The initial February 2008 legal petition issued by the plaintiffs was rather simple: the White House’s Council for Environmental Quality (CEQ) should provide guidance to federal agencies it coordinates with to weigh climate change impacts when utilizing the National Environmental Policy Act (NEPA) on energy policy decisions.

A legal process completely skirted in recent prominent tar sands pipeline cases by both TransCanada and Enbridge, NEPA is referred to by legal scholars as the “Magna Carta” of environmental law.

CEQ oversees major tenets of environmental, energy and climate policy. It often serves as the final arbiter on many major legislative pushes proposed by Congress and federal agencies much in the same way the White House’s Office of Information and Regulatory Affairs (OIRA) does for regulatory policy.

In February 2010, Obama’s CEQ showed signs it would utilize NEPA in its policy decision-making process with regards to climate change, issuing a “Draft Guidance for Greenhouse Gas Emissions and Climate Change Impacts” and opening up a 90-day public comment period.

“CEQ is releasing draft guidance for public comment on when and how Federal agencies must consider greenhouse gas emissions and climate change in their proposed actions,” the White House said in a press release announcing the Draft.

A review of the public comments issued on the White House’s draft show a barrage of industry backlash against the February 2010 draft proposal.

The Chamber was perhaps the most blunt in making its viewpoint known.

“The Chamber opposes incorporation of climate change into the NEPA analysis,”wrote the Chamber in comment to the White House. “[A]pplying NEPA to greenhouse gases in the manner discussed in CEQ’s draft guidance could open the floodgates to lawsuits by environmental groups and other Not In My Back Yard (NIMBY) activists to delay or stop projects.”

And the National Mining Association (NMA) argued for the opposite of what the CEQ proposal called for: fast-track reviews and time limits on them.

“A lengthy and unpredictable permitting process discourages the capital investments required for mineral exploration and mine development – destroyingUS job opportunities and contributing to our increased reliance on foreign supplies of minerals to supply US manufacturing and technology companies,” the NMA opined in its letter.

The industry push-back paid off.

After waiting for over four years for the final CEQ rules to be published, the International Center for Technology Assessment and the Center for Food Safety filed a legal complaint in May 2014 about the length of time it had taken CEQ to respond to their initial 2008 petition and issue final rules.

That complaint, it appears, served as the beginning of the end of the lengthy legal stand-off — for now.

In the midst of the procedural lawsuit filed against it, CEQ finally responded to the 2008 petition for the first time on August 7, writing a ten-page denial letter to the plaintiffs.

CEQ followed up its denial letter with an August 8 legal motion to dismiss the May procedural-related lawsuit and an accompanying memorandum in support of dismissal.

A federal judge accepted the motion to dismiss and the plaintiffs for the case — International Center for Technology Assessment and Center for Food Safety — agreed to voluntarily dismiss their procedural-ralated lawsuit on August 20.

“However, should they so decide, Plaintiffs preserve their right to challengeCEQ’s petition denial on its merits,” they wrote in concluding their notice of voluntary dismissal.

In other words, this case has reached an intermission.

The August 7 CEQ letter argued there is no need for CEQ to coordinate NEPA reviews across federal agencies because the Obama Administration proposed a Climate Action Plan in June 2013 and has made other policy moves on climate during his years dwelling at 1600 Pennsylvania Avenue.

“We appreciate and share your concern about the impacts of climate change on the environment,” wrote CEQ in the letter.

“CEQ and this Administration have taken seriously the urgency of addressing cliamte (sic) change and we are actively moving forward on a comprehensive Climate Action Plan focused on reducing greenhouse gas emissions…In light of these actions…CEQ does not believe that revising its existing NEPA regulations is necessary.”

Yet at the same time — and unmentioned in the August 7 letter — CEQ has also played an integral role in pushing coal exports abroad even as it coordinates coal-fired power plant regulations at home as part of Obama’s Climate Action Plan.

CEQ’s legal argument presented on August 7 offers a glimpse into the Obama Administration’s energy policy on coal: export it abroad, regulate it at home, which CEQ has facilitated.

“Much of the policy is being carried out behind closed doors,” explained Bloomberg BNA reporter Paul Shukovsky in a December 2013 investigative piece. “The CEQ exercises oversight, in secret, over the ways that permitting agencies…implement the National Environmental Policy Act.”

Shukovsky explained that as CEQ carries out a policy of promoting coal exports, it has completely negated weighing the climate change impacts.

CEQ and the agencies it coordinates with decided not to “consider the climate-change impact of burning hundreds of millions of tons of U.S. coal in Asia in its environmental analysis of export terminals being proposed in the Pacific Northwest,” he wrote.

Greenpeace USA recently published a report that crunched the numbers and concluded that the Obama Administration is exporting climate change by exporting coal, with the U.S. Bureau of Land Management (BLM) coal leasing program serving as the key enabler. Climate change risk assessment, Greenpeace pointed out, has been totally off the table.

The conclusion of this legal battle royale, at least for now, occurred just over a month after Judge R. Brooke Jackson struck down a coal mining expansion plan proposed in Colorado at the West Elk coal mine owned by Arch Coal.

Jackson cited climate change in his judgment, saying several federal agencies that originally permitted the mine expansion proposal did not consider climate impacts when they did their NEPA analysis and accompanying environmental impact statement (EIS).

He argued NEPA legally binds them to do so.

“The specific issue is whether the agencies took a ‘hard look’ at the rule’s contribution to climate change,” wrote Jackson. “I find that the [agencies] failed to take a hard look at these effects.”

Jackson also argued there is a tool to measure future climate change impacts: the “social cost of carbon.” Greenpeace USA used this tool to measure the climate impacts of BLM’s coal leasing program.

“The carbon pollution from publicly owned coal leased during the Obama administration will cause damages estimated at between $52 billion and $530 billion, using the federal government’s social cost of carbon estimates,” wrote Greenpeace.

“Bury Their Heads in the Sand”

Some praised the Jackson ruling as a key precedent-setting one with major implications in its immediate aftermath.

“This decision means that these agencies can’t bury their heads in the sand when confronting the very real impacts of climate change,” Ted Zukoski, an attorney who litigated the case on behalf of Earthjustice, said in a press release reacting to the ruling.

But at least one agency — the one coordinating with every other agency on energy and climate policy issues — has decided to “bury their heads in the sand” on climate change: the Council on Environmental Quality.

“Strong guidance from CEQ might have improved clarity and consistency in agencies’ analysis, and helped shine a bright spotlight on the federal government’s significant contribution to climate pollution,” Zukoski told DeSmogBlog via email. “CEQ’s washing its hands of the issue is a big missed opportunity.”