This is detailed analysis of the angle of the debris field and range of the US cited BUK missile system that the United States believes brought down flight MH-17. There are numerous fallacies related to the US’s inadequate presentation, including the range of the cited BUK system in relation to the crash site as well as the angle of the debris field which doesn’t correlate to the flight path. It is off course by 90 degrees to the left.

This deviation correlates to what the Russian government cited during their civilian radar presentation of the air space, which was released 4 days after MH-17 came down. They state that MH-17 made a 14 mile deviation from course and was trailed by a ‘rising’ fighter jet.

Additionally there are other inconsistent anomalies that are being revealed in relation to the ‘official’ version of the shoot down of MH-17 as cited by the United States. Proper investigation requires also looking for ‘that which is not there’ in relation to physics.

The left wing of MH-17 shows no sign of a shrapnel blast. The only heavy shrapnel blast damage is around the pilots cockpit window, which is improbable in light of the fact that a BUK missile detonates in proximity and not directly upon a target. The missile detonates by proximity fuse at an approximately distance of 70 feet from the target. It normally targets the larger part of an object due to it’s radar. The probability of a detonation 70 feet distant that creates a massive hole right upon the pilot seat lower window requires astronomically impossible odds.

The dispersion of the fragments of the warhead occurs in a 360 degree arc with shrapnel fragments of various sizes. It is highly improbable that the largest fragment would hit directly at the pilots seat and leave a massive hole that is significantly larger than all other fragmentation pieces from a distance of 70 feet.

The blast would also send shrapnel directly into the oncoming portion of the plane which was moving towards the blast area at 500 miles an hour. With the detonation occurring roughly 70 feet to the left of the cockpit, the left wing would have gone directly into the blast and been splattered with shrapnel. However, there is no shrapnel damage apparent to the left wing as proven by the most comprehensive photo collection related to MH-17 and the wing in almost fully intact. There is no incendiary damage which is normally associated with burning hot shrapnel. Link here: https://www.flickr.com/photos/jeroenakkermans/sets/

The first 12 photos of this set show the damage to the wing which was possibly caused by strafing. https://www.flickr.com/photos/jeroenakkermans/sets/72157645853477595/

Notice the angle of the damage and how a portion has bubbled up in the center due to wind flow into the hole. 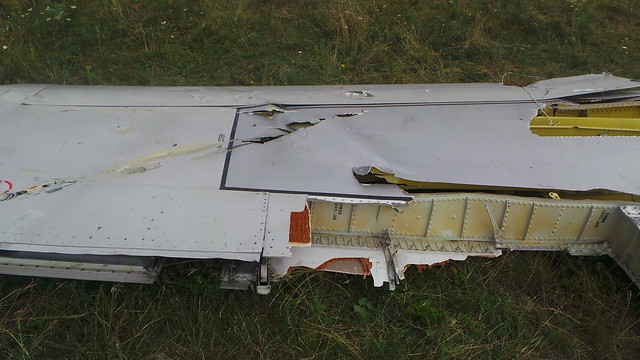 This angle and damage is consistent with alignment to the heavy damage that is directly upon the pilots cockpit window which is shown in the first 12 photos here. https://www.flickr.com/photos/jeroenakkermans/sets/72157645471359080/

Note that debris moving backwards form the cockpit would most likely not make an angle as such due to the excessively high wind speed. Debris would be blown straight backwards.

There is speculation that a MIG-29 (which can easily reach the altitude) hid in the pocket to the back left wing and hit the pilot with 30mm cannon fire.

He notes that the climbing height of an SU-25 was changed from 10,000 meters to 7,000 meters on wikipedia the day before the shoot down. This is the reason many speculate it was an SU-25 that brought the jet down, however there is also the possibility it was a MIG-29.

This article explains how a missile actually ignites wreckage in air due to heat friction. A flaming fireball while airborne was not witnessed. The plane exploded on the ground. Therefore, once again, a missile exploding next to the front fuselage is not probable. Original article in German.

This article, related to an intercepted email in March 2014, explains how the US and Kiev were gearing up for a false flag event in the near future. This may be a missing link. Is it possible this event was related to the future shoot down of MH-17?

Video of Russian civilian radar presentation. Excerpt: “A Ukraine Air Force military jet was detected gaining height, it’s distance from the Malaysian Boeing was 3 to 5km,” said the head of the Main Operations Directorate of the HQ of Russia’s military forces, Lieutenant-General Andrey Kartopolov speaking at a media conference in Moscow on Monday.”

According to the Russian Defense Ministry, at the time of the crash of Boing 777 in the skies over Ukraine on July 17 near the borderline was a Ukrainian Air Force plane, presumably Su-25.
Distance of the Ukrainian Su-25 from Boing 777 amounted to five kilometers, which fits into the range parameters of “air-to-air” missiles, which such aircraft are equipped with.

Evidence showing that the US’s presented ‘social media evidence’ is based upon deception.

Here is the Russian audio analysis of the manufactured recording. Unfortunately there are currently no subtitled english versions available. I am working on getting one. The audio recording was spliced incorrectly and it is easy to see how it was cut and pasted in a studio using basic audio software. Essentially Kiev did what any voiceover studio does. They made a little mini commercial with two VO actors sitting in front of microphones while an engineer stopped and started the recording….. but they made a pretty lousy incorrectly digitally spliced audio product. The recording is definitely fake and was made in a studio. With further analysis it may be possible to even determine the type of microphone used through audio frequency analysis. The microphones used were definitely not cell phone mics due to the width/fatness of the audio signal.

Finally I am including what has been called a ‘smoking gun’ but is still unverified at this time. It is a Facebook conversation that implicates Ukrainian oligarch Igor Kolomoisky. These Facebook screen shots point to direct involvement by Kiev personnel.

http://acloserlookonsyria.shoutwiki.com/wiki/Crash_of_Malaysia_Airlines_flight_MH17/Cyber_Berkut_leak Update on this link. It has been removed from the web since the time I posted it. Directly below is an additional link.

http://voicesevas.ru/news/yugo-vostok/3590-vzloman-akkaunt-pomoshnika-kolomoyskogo-na-facebook.html This particular aspect has also been covered by Russian media outlets.

For others looking for more information, this is a trove of information related to all things MH-17. Please distribute widely.http://dimitrxe.pp.fi/pub/Boras/home%20page/extras/Ukraine%20Filter%20June%20-%20August%202014.html