The first answer to my headline questions would be, YES! We should laugh and rub our hands together in glee. “HA ha! Suckers!” But there is something more to do when we read about conservatives financially conning conservatives. 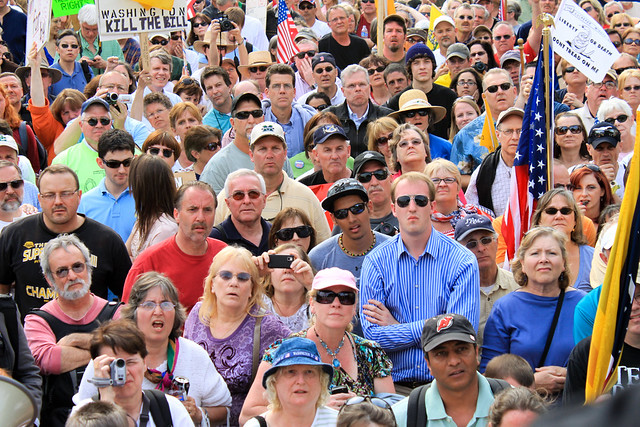 The wing nut group I’m talking about is the subject of a ProPublica piece by Kim Barker, Pro-Troop’ Charity Pays Off Tea Party Cronies Instead:  In summary she writes: “Move America Forward has collected millions to send care packages to U.S. troops. But its assets have been used to benefit conservative political consulting firms close to its Tea Party founder.” Barker does a tremendous amount of document-based research and makes this comment.

Yet an examination of its fundraising appeals, tax records and other documents shows that Move America Forward has repeatedly misled donors and inflated its charitable accomplishments, while funneling millions of dollars in revenue to the men behind the group and their political consulting firms.

Over at Salon Digby puts the story of Move America Forward and The Tea Party Express into more context. Wingnut scams the troops: How Tea Party quack uses fake charities to get rich

Digby points out that this is nothing new, that conservatives have been using so-called nonprofits to push conservative politics and avoid paying taxes for decades. Even with the rise of SuperPACs and passing Citizens United, some groups still like to tug on the ol’ heart strings to make money from “the base.”

I’m really glad ProPublica commissioned this piece and paid money to Barker to write it.  I’m glad Digby put it in context. But there is a third component that still needs to be addressed. “What is to be done?”

PositiveBrother,  a commenter at Salon said this.

Next I want to read about him being put in JAIL, very, very tired of just reading about, debating about, commenting about these people scamming money from people, while most hard working Americans go to work to try and feed their families.

And then Ranina asked:

Yes! While it’s great that they are exposed, now what? What can we do about it?

I realized years ago that journalism isn’t enough when it comes to these groups and their schemes. Often times these groups are savvy legally, financially, politically and in the media. In the Barker article you see, “Russo didn’t respond to questions from ProPublica” Of course not, because he doesn’t have to. He’s not under oath. Not only doesn’t he have to answer honestly, he doesn’t have to answer at all.

To answer PositiveBrother’s question you just find which laws were broken, find someone who cares and is willing to prosecute. That’s all doable, and if that is your expertise I say go for it! Please report back, I’d like to know what works.

Fighting Logically in an Emotional World

I’ve been working on a guide to using the Spocko Method to fight the forces I think are especially destructive to our society. One of the key ideas is to find the interested 3rd parties who care about the outcome and engage them.  When I was focusing on right wing radio, I went to the advertisers and asked them. “Do you want your brand tainted by being associated with this violent rhetoric, sexist screeds and bigoted comments?”

In this case who has been harmed? The people getting mislead.  How could you engage them? I’d sincerely ask, “Is what they did using your money okay with you?”

We need to understand that my opinion as a left-wing liberal doesn’t matter to MAF and TPE donors. They already know we are god-less troop-hating hippies. The opinion of any media but RW media doesn’t count. In fact, the very act of this story appearing in the liberal media is proof that we are “out to get ’em.”

Bookmark my words, they will circle the wagons because of the “hit piece” by the liberal media and then they will use it to raise money. All accusations will be denied, and they look forward to their, “day in court” where they will be proved right.  The right wing LOVES to be the victim.  They even need to invent attacks that don’t exist, ‘Obama is coming for your guns!”

It was interesting to note that in the ProPublica piece Melanie Morgan, the co-founder of Move America Forward and major participant in The Tea Party Express, was relegated to the last paragraph. I expect she will go into full denial, excuses and victim mode when she writes about this. Morgan was the public face of MAF and used her position on KSFO radio to constantly promote MAF and Tea Party Express fundraising events. Besides these kind of “charity” promotions, right wing radio gives hours of one sided ‘free advertising” for candidates during campaigns. Yet another FEC violation on our public airwaves that nobody is looking at.

How do you have an impact on people like Russo who use attacks as fund raising opportunities?  You go to the people who supported them and ask how they feel, what they think about the official response and — if they are unhappy — suggest to them something they can do to express their displeasure.

Expressing Displeasure via a Contribution Refund AKA. “I want my money back!”

In 2010 while reading a 494 page FEC documents about the Tea Party Express and writing about how they were sucking up police and community resources in Provo, UT  I spotted a section under itemized dispersion called “Contribution Refund.

I wondered, what is the story behind these refunds? I considered calling them up and finding out the reasons, but as an outsider I doubted they would talk. But we know that these people exist and the Tea Party Express sent them their donation back.

It would just be a case of contacting the refunded people and suggesting this course of action. I can’t do this, but someone from within the group who felt betrayed can. It needs to be a former donor to former donor appeal.

Some might approve, ‘I’m happy Sal is making money on my troop donations, a man’s gotta have a big house, car and salary to survive these days. Just as long as some troop-spitting hippies were punched and the troops know we care.”

But not everyone who was mislead in a donation is cynical or stupid. Some might see MAF’s actions and leadership as the ones disrespecting the troops. Donors have agency. They can and should act if they feel betrayed. Don’t rage at me for revealing this.  I’m not the one who mislead you. We aren’t the ones laughing at what gullible suckers you are (okay, apparently there are some of us who ARE laughing are you.)

The point is that I want my government to protect everyone from fraud.  But if you are someone who doesn’t believe in the role of government in protecting people and you are defrauded, betrayed, misled and ripped off what are you going to do about it?