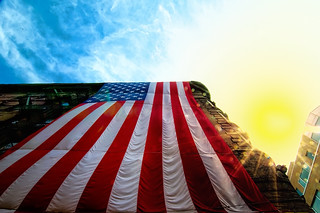 In American life, there is a large and growing number of institutions that act with utter impunity, are coddled by a fawning media, and no one, certainly not our supine elected officials, can dislodge them from their lofty perch, from which they shit on us all like cackling birds aiming at a just-washed car.

Universally loathed by their customers and haughtily scornful of the meekest attempts to curb their power, they scoff at our lapdog government and timid DOJ, even as they commit serial acts of theft, fraud, money-laundering, and perjury.

Electing a nominally liberal President clearly doesn’t change this; worse, it actually exacerbated the problem as it cemented bank-fellating policies into the ethos of both parties.

Despite winning the Presidency by running against the Drill, Baby, Drill crowd, Obama has done less than nothing to curb carbon output. Fracking, strip mining, mountaintop removal, and even offshore drilling after the BP disaster will be Obama’s legacy, despite his pretty words. Democrats in congress are no better; in coal and oil states, they’re indistinguishable from Republicans.

Though the odious Michelle Rhee has worn out her welcome, bashing public education can always afford new spokesmodels, with all the billionaires bankrolling it so feverishly.

While only Republicans openly advocate getting rid of public schools, Democrats actively supporting it are about as plentiful as nuns in a strip club. Meanwhile, underfunded schools continue to do limp along, losing all but the poorest students to private and parochial schools and lessening public support in the process.

Even more widely despised than the banks, spying, fleecing, and shoddy telcos continue to be lavished with immunity from antitrust and other laws that bind non-corporate “people,” providing the worst service for the highest price on the planet. And why wouldn’t they?

Doesn’t that sound homey? Like a potluck dinner with headsets. Just today, John Brennan admitted committing perjury before Congress, and didn’t bother to check with the President about whether he’d be keeping his job, much less be prosecuted, for this crime. And he needn’t worry, since he’d already gotten away with torture and merely lied in trying to cover that up.

Despite widespread, nearly universal revulsion at the obsessive and unconstitutional behavior of the NSA, everyone agrees that nothing will change there, either.

Even as the much of the planet is aghast at the accelerating genocide Israel is carrying out with US weapons, one member of Congress, Keith Ellison, has spoken out against it. That’s right, one. As blood runs in what remains of the streets in Gaza, politicians of both sides blame the victims and send more weapons to the perpetrators.

Meanwhile, any critics, even celebrities, are ruthlessly pummeled for betraying an ounce of sympathy for the Palestinians under ruthless collective punishment.

I could go on, but is it even necessary? There are many more proud scofflaws enjoying not just freedom, but active government support, throughout our society, and there isn’t a damn thing we can do about it. This, in a country that jails more citizens, and for the most paltry “crimes,” than any other on earth.

As Charlie Pierce likes to say, “This is your Democracy, America. Cherish it.”