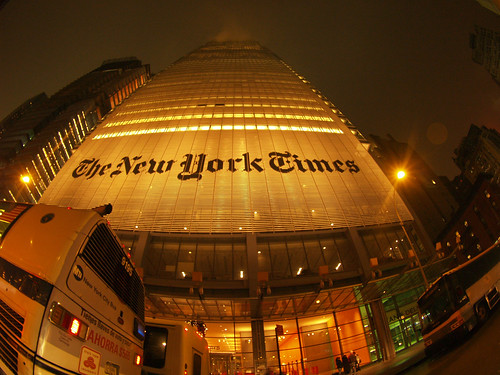 New York Times reporters seem to have neglected to engage in investigative journalism when reporting on last week’s attack by Israeli forces on a school in Gaza.

The school in Beit Hanoun, which was being run by the United Nations Relief and Works Agency (UNRWA), was shelled on July 24. At least sixteen people were killed and about 200 people were wounded in the attack, which occurred when the UN agency was trying to evacuate people. Palestinians have said that Israeli forces shelled the courtyard area where the bloodshed occurred and the Israeli military has now put out two versions of events intended to contradict the stories of survivors.

Rather than get to the bottom of why the accounts of what happened are so different, Isabel Kershner and Ben Hubbard, reporters for the New York Times, printed the new claims from the military and wrote, “It was not immediately possible to reconcile the accounts.”

But is it not the job of journalists to get to the bottom of any claims before passing them off as truth?

The headline for the Times’ story unambiguously read, “Israel Says Its Forces Did Not Kill Palestinians Sheltering at UN School.” That imputes some measure of credibility to the claims of Israel. So, was this headline from editors reasonable given the fact that Israel’s claims are rather incredible or, at best, impossible to verify?

The Guardian’s Peter Beaumont visited the site of the attack and reported that he was unable to find no debris from any Palestinian rockets. “The injuries and the number of fatalities were consistent with a powerful explosion that sent shrapnel tearing through the air, in some cases causing traumatic amputations,” Beaumont added.

On “Democracy Now!”, UNRWA spokesperson Chris Gunness responded to Israeli claims, “Qassam rockets are notoriously inaccurate. So the idea that within a few minutes a group of Qassam rockets could hit roughly the same area seems beyond miraculous,” and, “It’s perhaps useful to ask them why it is that weapons, when they fly into Israel, it’s said that they’re completely inaccurate; apparently they can all land in roughly the same space within a matter of minutes yesterday in Beit Hanoun. I think that needs some kind of unpacking.”

The military adjusted its story on July 27 after it concluded an “investigation” into what happened at the school. Haaretz reported that the investigation shockingly concluded, “One of the mortars fell in the school’s courtyard whilst it was empty of people.”

“In light of the investigation’s findings, we have rejected claims of casualties in the school grounds as they were presented by various elements immediately after the incident took place, and,“The IDF regrets any harm to citizens who are not involved in the fighting but continually emphasizes that this occurs as a sad result of Hamas’ choice to use civilians as human shields.”

Lt. Col. Peter Lerner, a chief Israeli military spokesperson, suggested that the wounded may have been “brought to the compound after injury,” which clearly implies the scenes of horror after the bombing may have been staged.

Lerner, according to the Times, “provided a video with 10 seconds of black-and-white footage shot by an Israeli drone that showed a blast in what appeared to be an empty courtyard.” He added, “It is extremely unlikely that anyone was killed as a result of that mortar.”

“The video did not include a time code, but Colonel Lerner said it was shot between 2 and 4 p.m. The United Nations said the attack had taken place at 2:55 p.m,” the Times report noted.

The obvious question for Lerner would be whether his forces have video showing the moments when people were in the courtyard. That would make it possible to unpack these claims and get closer to the truth of what happened.

The New York Times is a media organization with reporters in Jerusalem and Gaza City, who should be capable of doing some unpacking. ITV News was able to send a reporter to the scene of the bombing.  But it would seem they have studiously avoided scrutinizing Israeli claims.

The media organization has declined to offer readers context so they could recognize that Israeli military forces have a history of shelling UNRWA compounds.

On January 15, 2009, during Operation Cast Lead, Israel shelled a UNRWA compound in Gaza City with “high explosive and white phosphorous munitions.” The compound was sheltering 600 to 700 civilians and “contained a huge fuel depot,” according to the UN fact-finding mission which produced what is commonly referred to as “The Goldstone Report.”

During Operation Cast Lead, Israeli forces also shelled a junction nearby a UNRWA school that was “sheltering more than 1,300 people.” This prompted UNRWA director of operations in Gaza, John Ging, to declare, “There is nowhere safe in Gaza. Everyone here is terrorized and traumatized.”

Similar to claims made about the school attack, what the Israeli government maintained was that white phosphorous had been fired to “produce a smokescreen to protect Israeli forces from the Hamas anti-tank crews operating adjacent to the UNRWA headquarters.” And, “Despite the maintenance of a safety distance, some felt wedges and other components of the projectiles apparently landed in the compound after the release of felt wedges in the air. The IDF neither anticipated nor intended this outcome.”

…Those in the Israeli army who deploy white phosphorous, or indeed any artillery shells, are expertly trained to factor in the relevant complexities of targeting, including wind force and the earth’s curvature. They have to know the area they are firing at, possible obstacles in hitting the target and the other environmental factors necessary to ensure an effective strike. It is also clear that, having determined that it was necessary to establish a safety distance, the presence of the UNWRA installations was a factor present in the minds of those carrying out the shelling…

The Times has failed to highlight how the bombing of the school in Beit Hanoun was the fourth UN-run school to be attacked.

On July 22, the UNRWA Maghazi Preparatory Girls School, which had been sheltering 300 refugees, was shelled by Israeli forces. The next day when UNRWA officials returned to investigate what had happened, there was more shelling from Israeli forces, which endangered UN humanitarian workers and refugees again.

There would seem to be plenty of history and nuggets of information out there to give readers an accurate picture. Yet, again, the Times report indicated, “It was not immediately possible to reconcile the accounts.”

If it were Palestinians that were in the position of having to defend themselves, would the Times merely regurgitate irreconcilable accounts from both sides and leave it there?

The Times Editorial Board’s position on Israel’s assault on Gaza is virtually indistinguishable from President Barack Obama’s administration. The editorial board has called for an immediate end to the carnage but suggest Israel is doing everything it can do to protect civilians and fully support the mission of Israeli forces. It condemned the UN Human Rights Council for reminding Israel that it must adhere to international law and not commit war crimes. It adopted some of the Israeli military’s rhetoric, suggesting it is partially Hamas’ fault that so many civilians have died. They should have built bomb shelters like Israel.

Would the Israeli military have allowed these pieces of infrastructure to be built by a group designated as a terrorist organization? Would they have been allowed to remain standing? Where would Hamas have gotten the concrete or construction equipment to build such shelters? How could it build shelters out in the open when the Gaza Strip is under siege?

Those details go entirely unaddressed by the editorial board, as it and its entire staff covering Gaza continue to overlook or deliberately ignore the blockade imposed by Israel.

Unfortunately, it is hard to believe that Times reporters were lazy apathetic journalists, who just did not bother to analyze the claims of Israel. There are positions and views that have become an intrinsic part of the reporting published by the Times and these positions and views appear to leave reporters in situations where it is best not to reconcile accounts because doing so will force the media organization to rethink its stances on Israeli military occupation.