Saturday Art: My Poem for Gaza 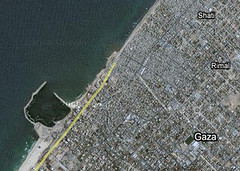 Almost 40 years ago, after showing my girlfriend (now my wife) my latest poem, she diplomatically told me that poetry was perhaps “the least of my many artistic talents.”  Since then, I haven’t written many verses, though I’ve set over 50 by others to song.

However, the ongoing Gaza butchery has shaken me to the core.  I am not alone.  This has been a pivotal event for many others.

How dare this shitty little country, run by audacious ingrates and uncouth boors, dictate a new paradigm for blowing up hospitals?  How dare their ambassadors and spokes-creeps drive more stakes into the heart of what little remains of 21st century ethics and humanitarianism?

On the way to the Anchorage airport Wednesday evening, my wife and I cried as we listened to Democracy Now.  Ms. ET is far less political than me, but the stories of this atrocity cannot pass one by.

My poem is partially derived from the King James Version of the Old Testament books of Lamentations and Hosea.  The quote from Albert Einstein is from an April 1938 speech he gave at the Commodore Hotel in New York City, and is based on my own re-transcription of a long-ago deleted article on it in the New York press.

The poem is for Siun.

Gaza, ancient city by the azure sea,
“How doth this city sit so solitary?

“She that was full of people!
How is she become as a widow,
a mother of countless orphans
and parents with unburied children!”

The prophets warned the kings, the generals, the courtiers,
The scribes, the rabbis, the lesser soldiers and teachers.

Now, let these craven men come before the Lord:
“Let all their wickedness come before thee; and do unto them,
As thou hast done unto me for all my transgressions:
For my sighs are many, and my heart is faint.”

Her courtiers cry out: “Distant Brazil, you be a cultural giant,
A diplomatic dwarf, for daring to condemn our campaign
to make alien hospitals the newest baths of blood.”

Her generals cry out: “World, we demand one child per hour
to satisfy our replacement for YHWH – our Lockheed-HP-Motorola-
Caterpillar-SodaStream Moloch.”

Her rabbis call out: “Scalp their children’s foreskins,
make them trophies to your bravery,
rape their women, steal back their pride, for it is yours.”

Her soldiers call out: “Make your shots count.
Aim at the pregnant woman’s belly and you get two for one.”

Her teachers call out: “There is no Palestine, no Palestinians,
No people there, but rather our land waiting to be sanctified
By our return – when the other is no longer there.”

Her scribes write: “They are lesser beings than we,
Less deserving of life, happiness, health, pride or dignity,
for we are G*d’s chosen, they are scum between our toes.”

Yet G*d senses a flood of falsehoods from these flagrant proclamations:
“Hear the word of the LORD, ye children of Israel:

“For the LORD hath a controversy with the inhabitants of the land,
Because there is no truth, nor mercy, nor knowledge of God in the land.

“By swearing, and lying, and killing, and stealing, and committing rapine,They break out, and blood toucheth blood.

“Therefore shall the land mourn, and every one that dwelleth therein
Shall languish, with the beasts of the field,and with the fowls of heaven; Yea, the fishes of the sea also shall be taken away.”

I should much rather see reasonable agreement with the Arabs On the basis of living together in peace
Than the creation of a Jewish State.

Apart from practical considerations,
My awareness of the essential nature of Judaism
Resists the idea of a Jewish State,
With borders, an army, and a measure of temporal power,
no matter how modest.

I am afraid of the inner damage Judaism will sustain
Especially from the development of a narrow nationalism
within our own ranks,
Against which we have already had to fight strongly,
Even without a Jewish State.

We are no longer the Jews of the Maccabee period.

A return to a nation in the political sense of the word,
Would be equivalent to turning away from the spiritualization
of our community
Which we owe to the genius of our prophets.

The harbinger has not yet brought a Messiah,
And his message has been unheeded countless times.

Is the messenger who will bring peace yet among us?
Is it a man or a woman?
How long must we wait?

Saturday Art: My Poem for Gaza