The “Piketty Effect,” or the 1% Can Be Harmful to Your Health

Anybody who reads the newspaper will be aware that, in the United States, the “one per cent” is taking an ever-larger slice of the economic pie. But did you know that the share of the top income percentile is bigger than it was in South Africa in the nineteen-sixties and about the same as it is in Colombia, another deeply divided society, today? In terms of income generated by work, the level of inequality in the United States is “probably higher than in any other society at any time in the past, anywhere in the world. Thomas Piketty – quoted in The New Yorker

I don’t want some rich person’s mansion or bank account. I just don’t want to pay for them with our schools and roads and postal service. Marym in IL- Firedoglake

While mulling over the huge impact of Thomas Piketty’s book,”Capital in the Twenty-First Century“, I got this nagging feeling that I had been here before, that this was so familiar, but I couldn’t put my finger on what it was…

Then it came to me… This is like when it was statistically proven that smoking causes cancer, and then a shockingly cancer ravaged, near death, much loved, proverbial chain smoker, John Wayne, showed up on that Oscar night in 1979… Only this time, in the case of the side-effects of inequality, the sequence has been reversed: first we are ravished, then near death and then we get the explanatory statistics.

However, I find the similarities striking: an enormous “public-relations” industry, including (massively) Hollywood, devoted over decades to convincing millions of men, women and children that something useless, expensive and totally harmful, was not only not harmful, it was “cool.”

Finally the statistical evidence combined with the sight of iconic personalities wasted by the smoking habit has brought about a sea change in public opinion, which has caused millions of people to give up the habit or never start smoking in the first place and forced the passage of stringent legislation, bucking the efforts of big tobacco, one of America’s most powerful lobbies. 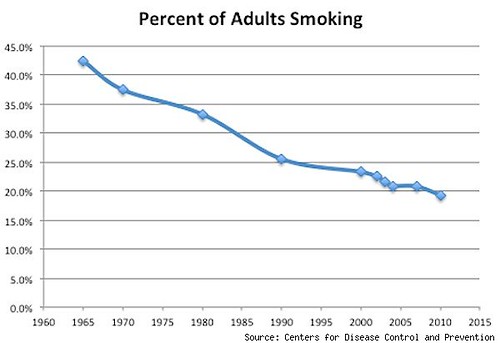 Today, far from being seen as cool, smokers are forced to huddle pitifully outdoors in the dead of winter, to get their “fix”.

Does this mean that thanks to the ravages of the financial crisis and the findings of professor Piketty we are going to see pitiful, former billionaires huddling on America’s sidewalks anytime soon?

I wouldn’t hold my breath waiting for it.

What we are going to see, I think, is an enormous, tectonic conflict between the sea change of Piketty empowered public opinion and the enormous power of the one-percent to corrupt the political process, which will dwarf anything that the tobacco lobby could ever even have dreamt of.

The “Piketty Effect,” or the 1% Can Be Harmful to Your Health