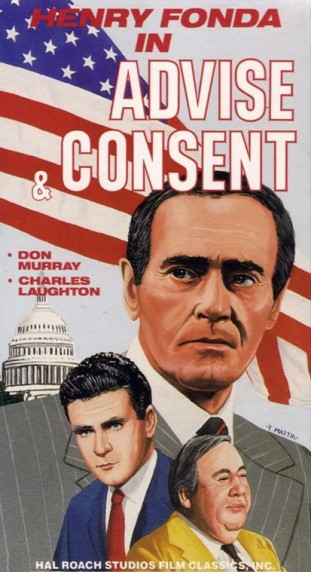 I know I was in high school when I first read Allen Drury’s Advise and Consent but I also know that I was aware of the book for years before I read it. It wasn’t until this Firedoglake Book Salon a few months ago that I became aware that elements of the story were based on real life events.

Drury won the Pulitzer Prize for Fiction for Advise and Consent. Knowing that there have been some other Pulitzer Prizes for Fiction for books that had a basis in fact does make me wonder a bit about that aspect of the Pulitzer, i.e., turning fact into thinly veiled fiction. Drury was in a position to learn “back stage” secrets about the US Senate, having covered the senate for a number of years as a correspondent for United Press.

In late ’43, Allen Drury was a 25-year old army veteran looking for work. A position as the US Senate correspondent for United Press International provided him not only with employment, but with insider knowledge of the Senate. In addition to fulfilling his duties as a reporter, he kept a journal of his views of the Senate & individual senators. In addition to the Senate personalities, his journal captured the events of the 78th & 79th Congresses.

Goodreads has Drury with twenty-six distinct works, six of them being from the Advise and Consent series. Ii know that after I read Advise and Consent I followed up with the next three books in the series, A Shade of Difference, Capable of Honor, and Preserve and Protect. I read the fifth book in the series, Come Nineveh, Come Tyre after it was published in 1973 but have no memory of reading the sixth book, The Promise of Joy (published in 1975) at all.

Drury, while writing mostly political fiction, also wrote a couple of Ancient Egyptian historical novels that I have read, A God Against the Gods and Return to Thebes. He also wrote a sci-fi, The Throne of Saturn about a space race between the US and Russia to Mars, though I do not recall reading it.

While most known for his fiction and Advise and Consent, Drury also had some non-fiction books. From reading his wiki, his book A Senate Journal: 1943 – 1945 looks quite interesting:

In late 1943, he was a 25-year old army veteran looking for work. A position as the United States Senate correspondent for United Presssoon provided Drury not only with gainful employment, but also with the opportunity “to be of some slight assistance in making my fellow countrymen better acquainted with their Congress and particularly their Senate.”[5]

In addition to fulfilling his duties as a reporter, Drury also kept a journal of his views of the Senate and individual senators. Drury freely offered his first impressions of many senators: “Alben Barkley, the Majority Leader, acts like a man who is working awfully hard and awfully earnestly at a job he doesn’t particularly like.”[5]

He considered Minority Leader Robert Taft “one of the strongest and ablest men here,” and felt that “Guy Gillette of Iowa and Hugh Butler of Nebraska vie for the title of Most Senatorial. Both are model solons, white-haired, dignified, every inch the glamorous statesmen.”[5]

Harry Truman was featured as his position changed from junior senator from Missouri to vice president to president in the course of Drury’s narrative. Given the period it covered, it is natural that Drury’s diary devoted considerable attention to President Franklin D. Roosevelt and his contentious relations with the Senate. Drury wrote: “If he appears in a critical light, that is because this is how we saw him from the Hill.”[5]

In addition to the chamber’s personalities, Drury’s journal captured the events, large and small, of the 78th and 79th Congresses. He characterized this period as “the days of the War Senate on its way to becoming the Peace Senate.”[5]

This was not published until 1972.

The movie Advise and Consent is Drury’s only IMDB credit but befitting a Pulitzer winner, the cast is an A-list from 1962 with Henry Fonda, Franchot Tone, Lew Ayres, Peter Lawford, Walter Pidgeon, Charles Laughton, and Gene Tierney among others and Otto Preminger producing and directing.

This Book Review: Allen Drury is from the Wall St Journal last month (just google the title if the article does not come through – the WSJ has an agreement with google to allow people behind their paywall) and proclaims Advise and consent as one of the few great Washington, DC based novels.