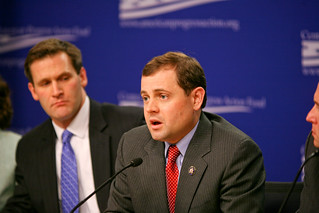 The head of CAP’s “action fund” Tom Perriello is now pushing for “principled” bombings of Iraq.

People forget the extent to which Democrats, who controlled the U.S. Senate at the time, pushed for and supported the 2003 attack on Iraq. Remember them or not, theeeeeeeeeey’re back!

The Center for American Progress, the head of whose “action fund,” former Democratic Congressman from Virginia’s Fifth District Tom Perriello, slipped through the revolving door into a State Department job in February, is now pushing for “principled” bombings of Iraq.

Principled or not, the Center for American Progress is funded by Lockheed Martin and other huge war profiteers. C.A.P. has just put out a report recommending that air strikes be considered.

For that to happen, many other things need to not be considered:

1. The views of the U.S. public, which opposes more wars and some of whom here in the fifth district of Virginia fantasized they’d elected an antiwar candidate in Periello several years back.

2. The views of the Iraqi public, who have been nonviolently and violently protesting an illegitimate government installed by the U.S.-led occupation.

3. The rule of law, which bans wars (under both the U.N. Charter and the Kellogg-Briand Pact) even in places where the U.S. has recently fought wars in blatant violation of the law without any legal consequences.

4. The U.S. Constitution, which required that wars be authorized by Congress even before Article VI came to encompass the aforementioned treaties.

6. The 11-year history of foreign military interference making things dramatically worse in Iraq to the point where it is no exaggeration to say that the nation has been destroyed.

7. The record suicide rate among U.S. war veterans, many of whom are realizing the role they played in destroying Iraq.

9. The liberties we keep losing as long as the wars for “freedom” role on.

10. The environmental destruction of our largest consumer of petroleum and greatest poisoner of land masses, the U.S. military.

11. The financial cost of trillion-dollar wars when tens of billions in reparations and actual aid could make a world of difference.

12. The history of small numbers of “advisors” in Vietnam and many other wars mushrooming into devastating occupations and millions of murders.

13. The need people have to imagine that Democrats are fundamentally different from Republicans. Think of the damage being done to that already tenuous pretense. Spare those tender souls any troubled thoughts if you can’t spare the lives of Iraqis for their own sake.

Photo by Center for American Progress under Creative Commons license