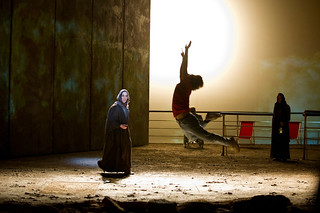 A look at a great operatic composer’s most controversial work.

Every serious list of America’s greatest living composers has neo-Romantic post-Minimalist composer John Adams at or near the top. His 2002 commemoration to victims of September 11th, 2001, On the Transmigration of Souls, won the 2003 Pulitzer Prize for musical composition. He has won five Grammies for recordings of his work. His most important orchestral works, Short Ride on a Fast Machine,  Harmonielehre, The Chairman Dances and Tromba Lontana are performed on a weekly basis all around the planet by the world’s top orchestras. His three full-scale operas and four other opera-like works are regarded as the most significant contribution to that genre by any American.

His three operas, Nixon in China (1987), The Death of Klinghoffer (1991) and Dr. Atomic (2005) are all held to be major masterpieces. His unique approach to opera, by basing them on real events and combination of real utterances by historic figures and fictional dialogue are all deep collaborations with poet and playwright Alice Goodman. Although all three are regarded as iconic in terms of the post-Minimalist music Adams created for them, one has stirred controversy because of its subject matter.

Since its premiere, The Death of Klinghoffer has had its detractors. The subject of the opera is the 1985 hijacking of the Italian cruise ship Achille Lauro, and the murder of one of its passengers, the disabled, wheelchair-bound Leon Klinghoffer, who was Jewish. The hijackers were members of the Palestine Liberation Front. The Metropolitan Opera has a production of Klinghoffer scheduled for the upcoming season. However, on Tuesday, their management announced they will not broadcast the performances of it, because of “rising anti-Semitism in Europe.” You read that right:

The Met decided to cancel its planned Nov. 15 Live in HD transmission of Klinghoffer to movie theaters and a radio broadcast after discussions with the Anti-Defamation League. The league praised the Met’s decision, saying that ‘while the opera itself is not anti-Semitic, there is a concern the opera could be used in foreign countries to stir up anti-Israel sentiments or as a vehicle to promote anti-Semitism.’

Peter Gelb, the Met’s general manager, said that he remained a champion of the works of Mr. Adams, and that he does not believe the work is anti-Semitic. But he added that he was reacting to the concern among Jews that the live transmission to theaters around the world ‘would be inappropriate at this time of rising anti-Semitism, particularly in Europe.’

The composer is understandably upset:

Mr. Adams, one of America’s foremost composers, said that he did not understand why the cinema transmission and radio broadcast were still being canceled if Mr. Gelb and the Anti-Defamation League agreed that the work is not anti-Semitic, though some critics have said otherwise. And he said he had been concerned by what he called ‘the really completely unjust charges’ about his opera, especially by people who have not heard it.

‘The really ironic and sad fact is that the content of this opera is more relevant in 2014 than it was even in 1991, when it was premiered,’ Mr. Adams said. ‘I think the people that are inflamed and upset about its production are people who are intent about trying to control their message. By canceling it, the Met has yielded to that intimidation.’

Mr. Adams, who praised Mr. Gelb’s support of his work and his ‘grit and determination’ to stage ‘Klinghoffer,’ said that he feared that without the global transmission, which is often followed by television broadcasts, many thousands of people would be deprived of the chance to see the work and make up their own minds about it.

‘I’m just afraid that most people will have a sort of Wikipedia opinion about this opera,’ he said. ‘They’ll say, “Oh, that’s the opera that’s been accused of anti-Semitism,” and leave it at that. And that’s really very sad — it’s very hard when something’s been stained with an accusation like that, it’s almost impossible to wash it out.’ [emphasis added]

I have tried to follow the performance history of Death of Klinghoffer since its premiere in 1991. At the time, I was seriously considering writing an opera about Edward Teller’s role in Project Chariot, a late 1950s plan to use four hydrogen bombs to create a new harbor in northwestern Alaska. I wanted to model it somewhat after John Adams’s first opera, Nixon in China, so was interested in how Adams’s voice was developing in his second opera.

All through its history, some individuals and Zionist organizations, and members of the Klinghoffer family have objected to one aspect of the opera or another. The first objection to which Adams responded was his depiction of some of the Klinghoffer’s friends, and his creation of fictional characters to portray them. They were perceived to be caricatures of some sort of Jewish stereotype. Adams deleted the scene. At least two scholarly papers have been written about how this deletion marred the opera’s form and balance.

The most authoritative person to claim the opera is anti-Semitic and romanticizes terrorism is the curmudgeonly Richard Taruskin, now a professor of musicology at Cal Berkeley:

Does The Death of Klinghoffer romanticize the perpetrators of deadly violence toward the innocent? Its creators tacitly acknowledged that it did, when they revised the opera for American consumption after its European premieres in Brussels and Paris. In its original version, the opening ‘Chorus of Exiled Palestinians’ was followed not by a balancing ‘Chorus of Exiled Jews’ but by a scene, now dropped from the score, that showed the Klinghoffers’ suburban neighbors gossiping merrily about their impending cruise (‘The dollar’s up. Good news for the Klinghoffers’) to an accompaniment of hackneyed pop-style music.

That contrast set the vastly unequal terms on which the conflict of Palestinians and Jews would be perceived throughout the opera. The portrayal of suffering Palestinians in the musical language of myth and ritual was immediately juxtaposed with a musically trivial portrayal of contented, materialistic American Jews.

As recently as last winter, the LA Opera pulled out of a co-production of the opera, leaving Long Beach Opera to produce it alone, which was a heavy financial burden for the company.

The most often-performed extract from the opera is a set of choruses, depicting displaced Jews and displaced Palestinians, in turns. They are choral masterpieces. Before September 11th, 2001, the Boston Symphony and chorus had programmed the work to be performed that fall. They cancelled after numerous complaints that the choruses “romanticize terrorists.”

The composer’s responses to criticisms and cancellations over the work’s 23-year history are studies in restraint. The opera is more like an oratorio or passion than what we generally consider an opera to be. More opera-like than most of those by fellow minimalist Philip Glass, Adams really does succeed in having a neutral point of view. Apparently that isn’t enough for some who are upset whenever Palestinians are treated even-handedly in comparison to Israelis or to Jews.

No doubt there will be new developments between now and the November production. Will any of the number of other living Pulitzer Prize winning American composers come to John Adams’s defense? There are at least 30 of them.

Or are they concerned about ruining their futures?

John Adams said he learned that the Metropolitan Opera was scrapping plans to transmit his opera The Death of Klinghoffer to movie theaters around the world when the Met’s general manager, Peter Gelb, told him on Sunday by telephone that he had gotten ‘unimaginable pressure’ from some Jewish groups that oppose the work. [emphasis added]

The Chorus of the Exiled Palestinians, from Penny Woolcock’s film of the opera:

Photo by Robert Hubert Smith released under a Creative Commons No Derivatives license.