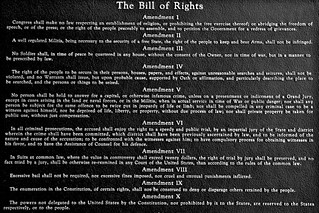 The Bill of Rights

Here’s what passes for good news when it comes to a free press these days: two weeks ago, the Supreme Court refused without comment to hear a case involving New York Times reporter James Risen. It concerned his unwillingness to testify before a grand jury under subpoena and reveal a confidential source of information in his book State of War on the secret U.S. campaign against the Iranian nuclear program. The case will now go back to the United States Court of Appeals for the Fourth Circuit, which has already ordered him to testify. He says he will instead go to jail, if necessary.

That’s the bad news, right? Really bad news! The Supremes, the highest court in the land, refused to protect a reporter protecting a source at a moment when the Obama administration is in the midst of a wide-ranging crackdown on leakers and whistleblowers of all sorts (and those in the media considered to be aiding and abetting them). Actually, in a world in which Congress has not yet managed to pass a federal shield law that would protect reporters, it turns out that that’s actually the good news — or so at least various media commentators say. Follow the logic here (and it is logic of a sort). Right now the Richmond, Virginia-based Appeals court decision applies only to courts in states under its jurisdiction. Had the Supremes agreed to take on the case, given their conservative and generally government-friendly bent on matters of executive power and what passes for national security, they would likely have ruled against Risen and that ruling would have applied nationally.

So, phew! Their rejection was a “blessing” (in disguise). The only harm they did, after all, was to confirm the atmospherics of a moment in which the Obama administration has been eager to shut down the leaking of unauthorized government information in a big way — oh yes, and drive another modest nail into the coffin of a free-to-report-what-our-government-actually-does media. That’s the minimal, not the maximal damage claim; so say various relieved commentators. As for Risen, he now has to depend on the kindness of strangers, of in fact Attorney General Eric Holder, who may briefly declare a truce in the administration’s “war on the press” and not jail him.

Best news we’ve had in a while! And should Congress pass that shield law (even if it leaves national security out), uncork the champagne! And we’ll all toast the Supreme Court and the attorney general and the president and his top officials for their grace under pressure. Or rather, hold on just a sec there. Maybe that isn’t quite the classic American way of preserving our freedoms — i.e, allowing our government free rein to preserve them for us, if its officials happen to be in the mood. In fact, as State Department whistleblower and TomDispatch regular Peter Van Buren suggests, we may be entering a grim new era when it comes to our Constitution and the Bill of Rights. Tom

America has entered its third great era: the post-constitutional one. In the first, in the colonial years, a unitary executive, the King of England, ruled without checks and balances, allowing no freedom of speech, due process, or privacy when it came to protecting his power.

In the second, the principles of the Enlightenment and an armed rebellion were used to push back the king’s abuses. The result was a new country and a new constitution with a Bill of Rights expressly meant to check the government’s power. Now, we are wading into the shallow waters of a third era, a time when that government is abandoning the basic ideas that saw our nation through centuries of challenges far more daunting than terrorism. Those ideas — enshrined in the Bill of Rights — are disarmingly concise. Think of them as the haiku of a genuine people’s government.

Deeper, darker waters lie ahead and we seem drawn down into them. For here there be monsters.