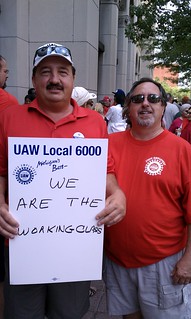 We are the working class

Here at the Chicano Veterans Organization (CVO), we have written much about the politics of the Center-Left for these past dozen years, and done with the perspective that the camouflaged conservative Democrats took to ‘advocating’ for corporate-friendly policies that commenced back in the early to mid 1980s.  Consequently, turning a blind eye to the ongoing demise of the Middle Class, was an easy accomplishment for  these conservatives on the ephemeral Left, and well-perfected in the rise of the Neo-Liberals during the regimen of Bill Clinton’s two terms in the Oval Office.  And since this Era or the Legacy of the Rise of the Neo-Liberals, the present day predicament for the Working Class has gotten worse, not better.  Of course, the Bush/Cheney Era just made things worse, by adding more people into the Working Class.  Thus “upward mobility” became an unrecognizable economic behavior when it came to achieving any relevance for the American Dream.

Thus, national pollster Stan Greenburg says it well and with regards to my proclivity for proper “context and content.”

“If Democrats cannot figure out how to appeal to today’s working-class voter, then they don’t deserve to lead.  Nearly all of the people in these jobs have not seen a rise in years.  The majority of them, who now work in the service sector—maids and housekeepers, waitresses and hostesses, cooks and dishwashers, counter attendants and ticket takers, janitors and hairdressers and child care workers—earn on average, about $400 a week.

“In some instances, today’s post-industrial members of the working class need the same things from government that their counterparts did in the industrial era:  a safe workplace, affordable health care, and a sound pension system, for example.  But other issues are comparatively new.  Female labor force participation now equals male participation.  A majority of households are made up of unmarried couples and parents, and mothers are the sole or primary providers in 40 percent of American homes.  All the issues surrounding the balancing of work and family life, including child care and pre-K education, speak directly to the needs of today’s  working class.”

For these past 15 years, here in the Sonoran Desert and West of the Mississippi River, Native Americans and Chicanos’ sole or primary political issue has been “Jobs and More Jobs.”  And looking to solve this thorny issue while expecting President Obama or the presumptive Democratic nominee of 2016, Hillary Clinton, to effectively address our major concern is not going to happen despite the reinforced and well-scripted propaganda delivered by these well-funded Neo-Liberal advocates.

By re-inventing the Comprehensive Employment Act (CETA) of years past, the Senate Chamber could exempt their “Pay For” Rule and begin implementing a more effective and well-funded CETA that addresses the “unmet needs” of our daily lives.

Unfortunately, Democratic propaganda has more value despite our ever-increasing voting behavior.  The alternative, of course, is rounding up the Democrats in our nation’s capitol, flying them to Afghanistan and Iraq, and upon arrival, let each of them draw the short straws for the available seats on the last copter leaving either of these two countries.

Picture from We Are Michigan licensed under Creative Commons