Hoosier School Heist: The Book with the Dirt on School Privatization

It’s been awhile since I’ve posted anything here, but I want everyone who is interested to know that my book Hoosier School Heist is out, and I am currently travelling Indiana speaking.  If you haven’t heard of the book, here is a brief rundown and what people are saying about it. 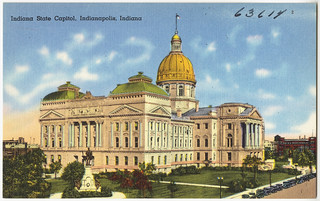 From the book’s press release:

Doug Martin’s Hoosier School Heist: How Corporations and Theocrats Stole Democracy From Public Education is out!  While mentioning Philly, Chicago, DC, New Orleans, Boston, and other cities across America, the book focuses on the assault on Indiana public schools and gives the dirt on the billionaires, theocrats, and corporations who are really calling the shots from behind the scenes: Jeb Bush, ALEC, the Waltons of Walmart, Bill Gates, Eli Lilly, Overstock.com, the Bradley Foundation, the Friedman Foundation, Amway’s DeVos family, hedge fund managers, and many, many more.

In Hoosier School Heist, Martin follows the scandals, the corruption, and the money, showing how friends of Mitch Daniels and charter school leaders (many who fund Indiana Republicans) are stealing millions of our tax dollars and putting public education in jeopardy.  Shockingly, Martin ties school vouchers to torture, shows people breaking Open Door Laws, describes felons, plagiarists, crony banksters, Wall Street Democrats, people who did time in prison (and many more who should have), liars, hypocrites, dictators, child abusers, Turkish Muslim charter schools raided by the FBI, and even two prostitutes. That is why Martin’s work has been or will soon be used by or featured in the Washington Post AnswerSheet, ABC’s Nightline, and the Associated Press.

In her blurb to the book, Diane Ravitch, a New York University research professor of education, best-selling author, and former US Assistant Secretary of Education, says that Doug Martin’s Hoosier School Heist is “one of the most frightening works I have read about the corporate reform takeover of public education” ever.

What a few other people are saying about Hoosier School Heist:

“This is one of the scariest books I have ever read. If only it were a work of fiction. I believe in public education. I cannot believe that in a country as great as ours, it has come to this.” Caelea Armstrong, Goodreads

“Warning! Hoosier School Heist will shock and make you angry. In an unbiased fashion, Doug Martin uncovers how the public education takeover crisis in Indiana was manufactured to benefit special interests and the politicians who serve them. This book will make you sick from what they have done and what they are doing to you and your children.” Daymon Brodhacker, Democratic candidate for District 60 of the Indiana House of Representatives

“Maybe it’s the legacy of Eugene V. Debs or the memory of coal-field union wars, but Western Indiana progressives say what they think. Martin’s give-‘em-hell approach reminds me of United Mine Workers members I met while writing about coal strikes 30 years ago.” Steve Hinnefeld, School Matters

“Doug explains “games billionaires play” including joining with weird religious cults to program your little ones with propaganda. … Tea Party groups, education groups, voters, and candidates are welcome to invite Mr. Martin to meetings to explain the tricks planned to steal more of your wealth.  (I believe all elections are about these tricks of stealing wealth and freedom.  It’s about time we talked about them).” Ed Gluck, former Libertarian Party candidate for the Indiana statehouse

“Doug Martin’s work documents a horrendous corporate takeover of community schools and community values.  It shows how corporate interests often disguise themselves as foundation largesse.  It shows what’s likely coming to your community soon.”  Susan Ohanian, recipient of the George Orwell Award for Distinguished Contributions to Honesty and Clarity in Public Language and co-author of Why Is Corporate America Bashing Our Public Schools

“Doug Martin offers readers facts rather than just more opinions from one particular “side of the aisle,” he follows the money, and he names names: from the Indy Pharm giant Eli Lilly, to politicians like Mitch “Daniels and Tony Bennett, to the out in the open oligarchs at the Walton and Gates Foundations, and finally he names the lower level soldiers these groups plant on school boards and grant funding organizations and who write op-eds in local newspapers under the banner of independent ‘Policy Reviews.’ That is, Martin relentlessly exposes every evil practice and every evil act whether performed by politician or business person.” Douglas Storm, WFHB Interchange radio show, Bloomington, during his interview with Doug Martin

“Doug Martin has a picture perfect cautionary tale that mimics another Titanic!  It felt like I had just read a murder cover-up and was following the blood trail of corporate $$$$.  A must-read for all involved in education in Indiana and across the globe.”  Justin Oakley, AFT Indiana and host of Just Let Me Teach radio show

Doug Martin on @ The Chalk Face

Hoosier School Heist: The Book with the Dirt on School Privatization