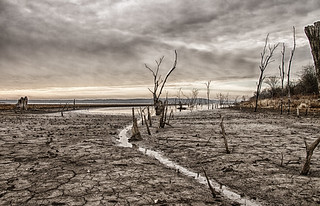 Across the state of Kansas, farmers are looking at their fields of winter wheat, and shaking their heads in sadness:

Kansans will climb aboard combines in coming weeks to cut perhaps the least amount of hard red winter wheat produced statewide since 1996, according to the trade organization Kansas Wheat.

The U.S. Department of Agriculture’s latest crop progress report rated almost 90 percent of the Kansas wheat crop at or below “fair,” with 34 percent scoring “poor” and 28 percent “very poor.” . . .

“Of all the leading regions of the world that produce wheat, we’re in the one area where there’s the most production concern,” said Dan O’Brien, a professor of agricultural economics at Kansas State University.

How bad is it? According to the US Drought Monitor report for June 10th, 93.81% of the state is in some level of drought, up from 74.56% last year at this time, and the worst levels of drought are in the biggest wheat producing areas of the state.

As dry as the fields are, the more disturbing drought in the minds of Governor Sam Brownback and his GOP minions in the legislature is financial:

The state collected $217 million less in taxes than earlier estimated, according to figures released Friday. That follows April when the state fell $92 million below projections. Recently, Moody’s Investor Services downgraded the Kansas credit rating over concerns about the state’s long-term financial health.

Brownback and Co. are spinning things madly, claiming that this is a one-off Black Swan event, driven by people pushing their capital gains taxes from one year into another to try to avoid federal tax law changes. But while the study they cite to back up their claim makes that point on a national level, when they look at the state by state issues, the problem they say Kansas is facing is primarily the result of something else (emphasis added):

Lucy Dadayan, a policy analyst with the Rockefeller Institute of Government, says the revenue department misrepresented her research about state tax revenue and that Kansas could be forced to make cuts in the near future.

“Kansas has been affected by this one-time 2013 tax year event. This is evidenced by a 47 percent drop in April and May payments attributed primarily to capital gains,” the Department of Revenue said in its release.

But the report tells a significantly different story for Kansas, one of six states to experience a double-digit percentage decline in personal income tax revenue.

“The large declines in Delaware, Kansas, and North Dakota are mostly attributable to the legislative changes that cut income tax rates as well as restructured tax brackets,” the report states.

Dadayan, a senior policy analyst at the Rockefeller Institute in Albany, N.Y., said the capital gains phenomenon had a bigger impact in other states like California and New York that rely more on non-wage income.

“In Kansas it’s really not of that much importance,” she said in a phone call.

“Of course the fiscal cliff had an impact in almost every state that has income tax. But Kansas is a special case because they had the largest tax cut in their history … and the large tax cuts in income tax is the primary cause of the declining revenues,” she said.

The revenue department quoted her research accurately, but by not showing the full context it painted an incomplete picture, Dadayan said.

“Everyone knows that they are just trying to present the information to their advantage. But what can I do? I can’t prevent them from quoting us,” she said with a laugh.

Easy for her to laugh — she’s in New York.

When Sam Brownback left the US Senate to become governor of Kansas, he did so with the plan of taking every conservative policy dream he could find and putting them into practice at the state level. Anti-choice laws and regulations grew like weeds, even as tax law changes dried up state revenue streams. His unstated plan, as I’ve said several times, is to position himself as The Conservative Who Actually Accomplishes Conservative Things in contrast to folks like Chris Christie or Ted Cruz.

Another sign of Brownback’s interest in a 2016 White House run is that he has joined hands with Missouri’s democratic governor Jay Nixon to push a bid by Kansas City, Missouri to host the 2016 GOP National Convention. Missouri and Kansas have been fighting each other for over a century, sometimes with guns but more often with lawyers, legislators, and the tax code (“Jump the state line, and we’ll give you a tax break . . .”), so for Brownback to help a neighboring democratic governor get the GOP convention in a city of that other state, something big is going on. The GOP site selection committee just came through town on their tour of the remaining finalists, and Brownback was happy to help the bid. Brownback wants to be on stage at that convention, and not just as a local governor. He wants to stand up on that stage, point to all the conservative state policies he’s enacted across the border, and accept the nomination of the GOP to do the same at the federal level.

Sadly for Brownback, the noted liberal bias of reality is biting him in the tail. Minzie Chin has been watching that other petri dish of GOP policy prescriptions, Wisconsin, and comparing it with the liberals of next door Minnesota, and the results have been disappointing for Wisconsin. Recently, she’s added Kansas and California to her comparisons, and it looks even worse. From April:

Notice Wisconsin is converging to Kansas’s dismal outlook. Wisconsin and Kansas are fairly highly ranked according the ALEC-Laffer index (2014 edition). In contrast, Minnesota, performing on par with the United States since 2011M01 was ranked 46th. And California, far outperforming Wiconsin and Kansas, was ranked 47th. As noted in this post, the correlation between the ALEC-Laffer rank and growth rank is negative, if anything.

In the comments to her update in May, one 2slugbaits smacks down a rightwinger who parrots Brownback and his minions quite adroitly:

There’s also a lot of non-thinking out there…especially in Kansas. Just how long-term do you have to look out before you can declare something a failed policy? Telling us that Gov Walker’s policies and Gov Brownback’s policies will lead to better growth 10 years down the line is both useless and untestable. You haven’t even advanced a coherent theory that would tell us why tax cuts for the rich would help long term growth. This is what I meant by mumbo-jumbo economics. Look at the graph. Both Wisconsin and Kansas are doing worse than the country at large, not better. This trend has continued unabated for over three years. What kind of empirical evidence would convince you that tax cuts for the rich and rentier classes are not the cure for every economic problem? As I’ve said before, there’s not a lot that governors and state legislatures can do to overcome larger macroeconomic forces. Dealing with the business cycle is primarily a job for the federal government. But there are lots of things that governors and state legislatures can do to make things worse than they otherwise have to be. Walker and Brownback seem to be going out of their way to find the dumbest, most hurtful policies imaginable.

And do go look at that graph. It’s a doozy.