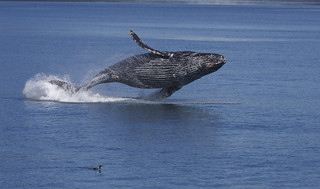 Tonight’s music video is “Where I’m From” by Eels, performed live at KCRW.

A beached whale should be difficult to hide, but an art conservation student discovered one hiding in a 17th century Dutch painting, according to Livescience.

Until recently, the painting — ‘View of Scheveningen Sands,’ created by Hendrick van Anthonissen around 1641 — simply showed groups of people gathered on a beach in The Hague in the Netherlands.

‘It seemed a very unassuming painting depicting a very calm beach scene set in winter,’ Shan Kuang, a conservation student at the University of Cambridge’s Fitzwilliam Museum, said in a new video explaining the strange find. ‘There were clusters of people gathered. I was unclear why they were there, but it didn’t seem too out of normal.’

Kuang was tasked with removing a coat of varnish, which is typically found on oil paintings, but unfortunately yellows over time. When she began cleaning, a figure emerged on the horizon of the ocean next to a shape that looked like a sail. This was ‘extremely peculiar and unexpected,’ Kuang said. But further cleaning with a scalpel and solvent revealed the floating figure was actually standing on top of a whale, and what at first appeared to be a sail was actually the whale’s fin.

At the time the painting was created, there was a surge of public interest in whales, researchers at the museum said, noting that historical records document a number of whale strandings on the coastline of the Netherlands in the beginning of the 17th century. … It’s not clear when or why someone decided the whale had to go, but an analysis of the paint used to cover up the animal suggests the alteration took place in the 18th or 19th century before the painting was donated.

The Watercooler is an open conversation. Ask questions, share links and your thoughts.