Trying to make sense of a manic monetary theory

Economics is a closed system; internally it is perfectly logical, operating according to a consistent set of principles. Unfortunately, the same could be said of psychosis. What’s more, once having entered the closed system of the economist, you, like the psychotic, may have a hard time getting out. 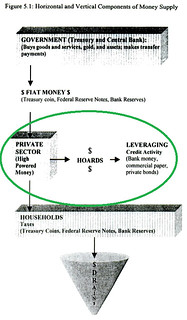 I had planned to follow up last week’s post with at least a couple others, but the various discussion threads have persuaded me that it’s probably best to just do a single “summing up” post, go through the comments, and leave the topic for the foreseeable future.

Yet proponents insist that other things, things that have nothing whatsoever to do with monetary theory, are part of Modern Monetary Theory. I’ll illustrate using my exchange with letsgetitdone since it’s fresh, but I think it’s also representative.

If he (and other advocates) would just call the thing Modern Monetary Policy or Modern Monetary Advocacy or anything else that encompasses “public purpose” commentary, I wouldn’t have any argument. But you can’t have it both ways: If you want to present your ideas in the dispassionate, technocratic, scientific-sounding mantle of monetary theory, then you need to stick with monetary theory.

Proponents of Modern Monetary (not a) Theory choose instead to use the monetary theory as a launching pad for a bewildering, sometimes contradictory, variety of prescriptions. For instance, the un-theory endorses a basic income (“Job and income guarantees are complementary policies”), except when it doesn’t:

basic income guarantees are unlikely to achieve the objectives of alleviating poverty, income inequality or poor standards of living, because the proposals have an inherent highly inflationary bias with disastrous consequences for the currency.

Modern Monetary Theory has no equivalent of Keynes’ General Theory of Employment, Interest and Money (which, incidentally, advertises itself as something more than a monetary theory).2 Without an identified creator and foundational text, everything is up for grabs. And untethered from actual monetary theory, proponents are free to turn it into whatever they want.

Turning again to letsgetitdone’s comment, he took advantage of that opportunity (“I wrote a 16 part series on this subject”), but given his tendency to lapse into incomprehensible jargon (“a new ecology of self-organized voting blocs and electoral coalitions fueled by an IT application enabling people to create a metalayer of constraints”) I don’t know how many folks will feel like jumping in. Oh, and also: his reference to getting “the right people in charge” has a really creepy, totalitarian ring to it.

There’s just too much. It’s all too scattered, too open-ended and waaaaaay too verbose for anyone outside the closed system to get an easy grip on. Rainbow Girl may have put it best:

Does this mean that “MMT” is whatever one’s “construct” or “definition” of it is? Like a Roscharch test? Is it even possible to provide citations or links in responding to a discussion or post about MMT that consists of a “construct” or “definition” or “interpretation” of the large opus of MMT — which is a corpus of separate writings by separate people several of whom seem not even to agree with each other on essential features like “public purpose,” “tool” vs. “Policy,” etc. (for example: you and Ben right here; another writer responding to a critique of Wray’s “no taxes” post at NC saying “Wray is not MMT”).

Simply focusing on the monetary theory part of Modern Monetary Theory ought to be enough to occupy any proponent for now. Calling for austerity with “we don’t have money” is factually wrong; those who say it should be made to look foolish. Pushing back against that line, emphatically and persistently, until it gets discredited, is a tall order.

Succeeding won’t by itself end the austerity narrative. Those who invoke it have a deep hostility to social programs, and will just find another story to attack them. But looking foolish will erode austerians’ credibility, which makes austerity budgeting harder to justify. It’s too bad that isn’t seen as a sufficiently ambitious goal.

1. Galbraith, the Elder is also the name of my heavy metal band.
(Back)

2. Some might recommend Mosler’s Seven Deadly Innocent Frauds as a foundational text. If so, fine – but he doesn’t describe it as a modern monetary theory (or even use that phrase). Call it Mosler Monetary Policy, get everyone to defer to Mosler as the final word on MMP, and order starts to form out of the chaos.
(Back)

Trying to make sense of a manic monetary theory