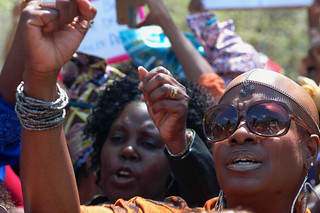 A demonstration in Union Square in support for the kidnapped Chibok girls.

After wins by France’s anti-immigrant National Front in European Union elections, large scale removal of camps of refugees by riot police has begun in Calais — attributed to public health and safety concerns. Similar evacuations are being carried out in northern Spain.

Calais has for years attracted a high number of immigrants who flee poverty or conflict in countries such as Afghanistan, Syria and Iraq, many of them hoping to cross the narrow sea channel to Britain by ferry or the sub-sea train tunnel.

Many of the estimated 600-800 immigrants living in the three camps had moved out before the well-publicized evacuation ordered by Denis Robin, prefect for the Pas-de-Calais region.

Pas-de-Calais is in northwestern France, where the far-right National Front won 34 percent of the vote in Sunday’s EU election – one of its best tallies and a tripling of its score from the 2009 vote.

The party has long campaigned for a dramatic reduction in immigration and opposes the ‘Schengen’ borderless zone at the heart of the 28-member European Union.

Nations around the world are sending search and security efforts, which includes drones, and special assistance to Nigeria in the attempt to rescue the kidnapped Chibok girls. Restrictions against foreign aid have been lifted for the search to proceed.

For most Nigerians, the arrival of these foreign security experts to help in locating and freeing the abducted schoolgirls was the ray of hope they had long expected from the global horizon. Britain alone has sent a mixed team, led by the foreign office, with components from the Metropolitan Police, the Ministry of Defence, the Department for International Development and the intelligence agencies.

Some observers believe that it took repeated pressure from world leaders to convince Jonathan to accept external help. They said offers made earlier were turned down by the president, following claims that over 50 of the girls had been rescued. President Jonathan had come under attack by Nigerians who felt government was too slow in responding to the abduction. Still, there were other Nigerians who insisted that security forces should tread softly because a full blown military rescue operation, even by Special Forces, would amount to putting the lives of the girls at risky.

In its typical race to the bottom, one of Rupert Murdoch’s Australian papers defied custom and published a picture of the Duchess of Cambridge’s ‘beautiful bum’.

The Sydney Daily Telegraph said British newspapers had refused to run the photo out of respect to the royals, but in a comment piece said this was ‘an antiquated code of etiquette’ under the headline ‘My bare lady: Derri-heir to the throne is fair game.’

‘It seems a bit ridiculous to expect the rest of the world’s media to follow suit, particularly in a world in which flesh and commercialism go hand in hand,’ said Telegraph social writer Annette Sharp.

‘If the duchess can’t be bothered protecting herself by having hem weights sewn into her garments, why should the media protect her?’