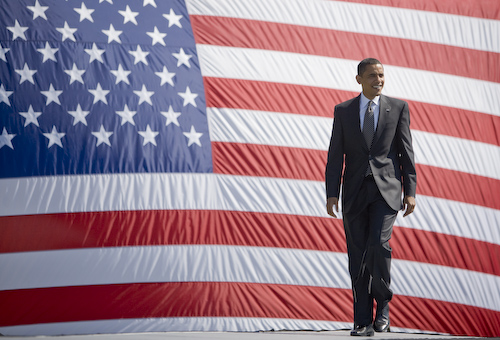 Obama could have used his brief window of strong popularity to try to force through as much of his agenda as quickly as possible. Instead, he thought he could bridge the two parties for a new era of bipartisanship. Will he succeed now with immigration reform?

Immigration reform is probably the last chance for President Obama to prove his legislative strategy for advancing his agenda wasn’t a mistake.

After President Obama was elected he faced a serious choice about how to implement his policies. He could either take a steamroller approach or focus on bipartisan outreach. With huge Democratic majorities in Congress and the powers of the executive branch, Obama could have used his brief window of strong popularity to try to force through as much of his agenda as quickly as possible. Instead, he thought he could bridge the two parties for a new era of bipartisanship.

His strategy was not just to reach out to the our side but constantly try to prove he was “serious” with preemptive compromises. Obama seemed to believe D.C. was actually run by some all-powerful council of serious elders who would grant favors to those who made the most worthy sacrifices on their altar.

This was his strategy time and time again with really poor results. On health care reform, he preemptively embraced Republican ideas, like an individual mandate and taxing employer provide benefits, but the GOP rewarded him by abandoning their support for these ideas leaving Democrats the sole champions of deeply unpopular policies. He let the Gang of Six waste months on clearly doomed negotiations as support for the bill steadily eroded.

When the Bush tax cuts were set to expire he tried to use it as leverage for a deal instead of taking a firm stance or using reconciliation. The end result was several showdowns, and finally a smaller tax increase on the wealthy than Obama promised.

Similarly, with the debt ceiling Obama thought claiming to be open to negotiations would be a great way to reach out to the GOP, but the result was one of the biggest disaster of his tenure.

In his pursuit of a grand bargain Obama did a misguided pay freeze for federal employees and embraced social security benefits cuts to prove he was the most serious person in the room. He didn’t get his grand bargain, but did needlessly piss off part of the Democratic base and also gave Republicans another tool to expand their support among senior citizens.

Finally, there is immigration reform. Obama has proved his seriousness on immigration enforcement with a record number of deportations, but the chances of Republicans embracing reform still seem incredibly remote. If nothing is done in Congress soon Democrats are finally threatening that Obama will take executive actions on immigration, but Obama could have, and should have, taken these actions five years ago.

Immigration reform is the last chance for Obama to prove that preemptively giving in to Republican positions can led to bipartisan legislation. If it doesn’t happen it would mean Obama seriously squandered his first two years and needlessly allowed bad executive policies.