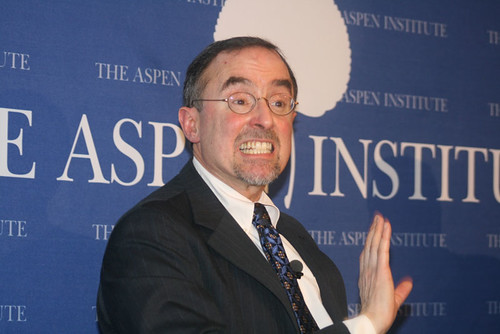 Michael Kinsley: Greenwald “does not deny” that he “aided and abetted Snowden.

The New York Times has published a review of journalist Glenn Greenwald’s new book, No Place to Hide, by Vanity Fair contributing editor Michael Kinsley in which he madly endorses the interest the United States government may have in prosecuting journalists who publish leaks.

Kinsley, who was once the co-host on CNN’s “Crossfire,” defends fellow Beltway establishment journalist David Gregory, who asked Greenwald on “Meet the Press,” “To the extent that you have aided and abetted Snowden,…why shouldn’t you, Mr. Greenwald, be charged with a crime?”

Greenwald “does not deny” that he “aided and abetted Snowden,” Kinsley writes. So this question is “not baseless.” “If the leaker can go to prison, why should the leakee be exempt?”

Kinsley suggests that Greenwald thinks he is “beyond having to defend himself.” But Kinsley sympathizes with the government’s efforts to prevent news media from exposing government secrets. He holds the view of officials in the White House that a “balance” between national security and press freedom. He also appears to hold the viewpoint of those in the highest positions of the national security state—that decisions about what should and should not be kept secret are best left to the people who most benefit from keeping Americans in the dark about what they are doing with their power.

“So what do we do about leaks of government information?” Kinsley asks. “Lock up the perpetrators or give them the Pulitzer Prize? (The Pulitzer people chose the second option.)”

For Kinsley, journalists who won Pulitzer Prizes, one of the most esteemed prizes in the field of journalism, are “perpetrators” who the government has a legitimate interest in wanting to imprison.

“I can’t see how we can have a policy that authorizes newspapers and reporters to chase down and publish any national security leaks they can find,” Kinsley adds.

It is difficult to see how one can hold this position and still continue to practice journalism. How can any self-respecting journalist favor government clamping down on the free flow of information, the very resource which is needed for people in the news business to have news stories that are in the public interest?

How can any self-respecting journalist make this argument and show such total disregard for the tradition in which reporters have depended on confidential sources to report on torture at Abu Ghraib, the CIA’s secret prisons, NSA warrantless wiretapping, etc?

It’s similar to how Stuart Taylor Jr., a contributing editor at Newsweek and a columnist for the National Journal, suggested the media has become “too loose in publishing anything they can get their hands on.” Although noting some exceptions, Taylor argued the trend has been, “if we can get our hands on it, some secret program, we publish it. And I think there has not been enough attention to which of these leaks do real damage to national security and which do not. I think the media has put out a lot of stuff from Edward Snowden that does real damage to the national security and accomplishes very little in terms of protecting our privacy.”

In fact, Kinsley appears to be a forerunner for a shift in culture in journalism where US reporters who favor publishing “confidential business or government documents without authorization” has dropped significantly in the past twenty years.

James Goodale, who was the the chief counsel for the New York Times on the Pentagon Papers case, has spent his life defending the press’ right to publish. News organizations have a right under the First Amendment to gather and report on this information. Alleged national security interests do not trump this freedom, however, journalists like Kinsley are offended when journalists like Greenwald exercise their freedom because they are ingratiated by the very government agencies they are supposed to be exposing in their role as a part of the Fourth Estate.

Here is Kinsley arguing against media organizations being able to choose whether to publish material when the government does not want secret information to be released:

“It seems clear, at least to me, that the private companies that own newspapers, and their employees, should not have the final say over the release of government secrets, and a free pass to make them public with no legal consequences.”

Kinsley vindictively promotes the idea that Greenwald and other journalists involved have somehow been irresponsible with the NSA documents and that the judgment of news organizations cannot be trusted in a democratic society. This completely negates the numerous pages in Greenwald’s book where organizations going through a prepublication process where they negotiate with the government on what to publish and not publish is recounted. It also ignores the rampant over-classification of information in government that has been perpetuated for decades by the government and how the press plays a key role in forcing the government to be transparent by bringing controversial programs and policies officials do not want the public to know out into the sunlight.

The review is dripping with contempt for the award-winning journalism that Greenwald and others have engaged in over the past year. It shows complete indifference to the chilling effect created by the Obama administration’s record number of leak prosecutions.

Even though the Vanity Fair published a major story on Snowden, Kinsley seems to be more like fellow Vanity Fair contributing editor Kurt Eichenwald and, perhaps, readers should be grateful that Kinsley did not address whether he thinks Snowden is a Russian or Chinese spy (or both), who Greenwald “aided and abetted.”

Ultimately, it is rather disgraceful that this is the review of Greenwald’s book that Times editors allowed to be published. The book provides an unprecedented glimpse at the surveillance state that has developed since the 9/11 attacks and yet the Times gives Kinsley a platform to use the review to stridently rant at Greenwald.

Snowden had not wanted the Times to have any documents because of how the media organization had initially spiked the story on NSA warrantless wiretapping by James Risen and Eric Lichtblau in 2004. But the Times was able to participate in breaking some of the biggest news stories in recent history because The Guardian gave The New York Times documents when the British government threatened to shut The Guardian’s coverage of the NSA files down.

Does the Times recognize that all this despicable innuendo lobbed at Greenwald promotes a policy in which government targets journalists who publish leaks? And do Times editors support this view being represented in their newspaper, even when their own reporters who reported on NSA documents may potentially be open to the same charges of violating the law if Greenwald were prosecuted?

The book review encourages the demonization of journalists who have the courage to confront power. It reinforces Director of National Intelligence James Clapper’s view that journalists who reported this story are “Snowden’s accomplices.” And it shows that editors at the Times are more interested in playing the role of gatekeeper for the national security state than giving readers a review of a book that all Americans should be taking the time to read.

Photo from the Aspen Institute under Creative Commons license