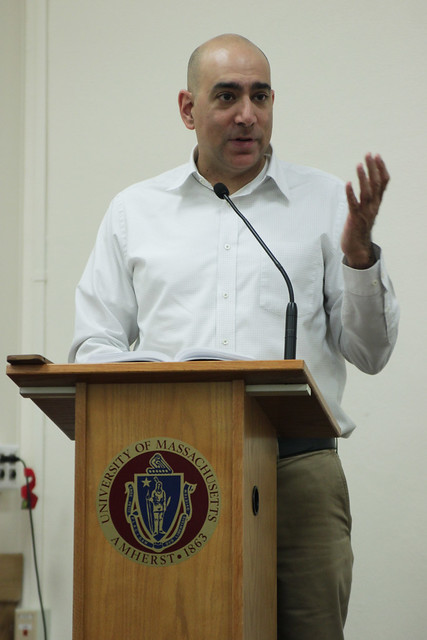 Please join us Sunday for Ali Abunimah’s The Battle for Justice in Palestine. I’ll be hosting. Of the FDL book salons on the subject of Palestine-Israel that I have hosted, I’m looking forward to this one the most. Ali has been in this battle for a long time. We will get to witness him explain the book’s bold opening sentence, “The Palestinians are winning.” And much more.

I.  2014 is a year seeing rapid changes in how the world views and reacts to relations between Israel and Israelis, and their co-inhabitants, in the so-called “Land Between the River and the Sea.” Terms used to describe Israeli policies and laws, words such as “racist” or “apartheid,” for instance, are quickly gaining more currency, more acceptance. Pushback against use of such terms by ardent Zionists seems to get less traction in the public at large by the day.

The main reason this is the case is simply grounded in abundant examples of racist and apartheid incidents, rules, policies and actions perpetrated daily in that land. The very recent assignment of blame on the breakdown of the Peace Process™ talks supervised by the U.S. State Department, between the Palestinian Authority and the Israeli Foreign Office on the Israelis, by Secretary of State John Kerry, lead negotiator Martin Indyk and others is unprecedented.

Every week more organizations become leery of dealing with Israel as if everything is normal there. Pension funds divest. Professional associations pass resolutions to cut ties with their Israeli counterparts. Churches pass resolutions of condemnation or divestment, even an unblushing published study guide labeling Zionism as “false theology.” College student government bodies debate the utility of the Global BDS Movement, and vote to participate in it – or not. The list of professional associations of college faculty boycotting Israeli institutions grows monthly. This trend will only accelerate, as Israel is plummeting over the edge, no longer able to hide the true nature of the country’s vision of Jewish supremacy at the expense of non-Jews. Just this Thursday, Israeli Economic Minister Naftali Bennett proposed, once again, to Prime Minister Netanyahu, to annex Area C, 74% of the West Bank:

Bennett has presented his plan in recent weeks to foreign diplomats stationed in the country. The proposal includes removing IDF roadblocks in the territory left under Palestinian control, Areas A and B, as well as investing in infrastructure there and pursuing massive economic development.

Europe and the United Nations – which have indicated they view Area C as vital for the viability of a future Palestinian state – have in the last few years increasingly focused on shoring up Palestinian development there, including with financial assistance.

This annexation would result in the remainders of Palestine being something that looks like nothing in the world more than the former Bantustans of South Africa: 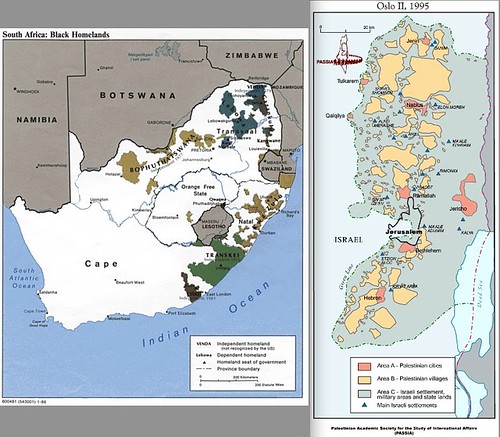 II.  The Battle for Justice in Palestine is just one of many books that look at the growing problem of an Israel run amok. Unlike Max Blumenthal’s recent book, Goliath, Life and Loathing in Greater Israel, Ali Abunimah’s book concentrates on the rights of Palestinians – in Israel, in the Occupied Territories, in Gaza, and in the global Palestinian diaspora. He relates this civil rights struggle to many other such struggles, some in the past, some ongoing. In an interview with Rania Khalek last month, Abunimah answers her query about this central aspect of the book:

Khalek: I love the connections and intersections you make in your book between the subjugation and control of people of color in the United States and Palestinians and African refugees in Israel. Why do you think these connections are important to highlight?

Abunimah: They’re important to highlight because they’re real at a number of levels. One is mass incarceration. The new Jim Crow and Obama’s mass deportation are products of still-very-present white supremacist and colonial mentality in the United States. These ideologies are what allow people of color to be treated essentially as a demographic threat in the United States. And that goes from Arizona, which I talk about in the book, where it’s kind of ground zero. But it’s also very much at the federal level and all over the country.

And these connections are real in very material ways.

In the book, I talk about this kind of conveyor belt of US police chiefs being taken on these junkets to Israel, where they’re taken to places like Megiddo Prison, where Palestinian children are tortured and held in solitary confinement. And then they come out and say, “Wow, Israel is so great. We’re going to take everything we learned about counterterrorism back to the United States.” Our police chiefs in the US have no problem praising Israel as a paragon of human rights and good practice, and that really should set alarm bells ringing off everywhere.

So those are the connections I saw and writing this book was a process of learning about them and deepening my own understanding. But I think as a movement that something we need to do urgently is broaden and deepen our understanding of shared and joint struggle.

You should read the entire interview.

The author is well known for his essays, earlier books and wide appearances in the media, on college campuses and other civil rights-conscious venues. He is the principal co-founder of Electronic Intafada, now well into its 13th year of web-based news gathering, reporting, opinion and essays. He was central in the unveiling of the propensity toward violence of Joshua Treviño, after the latter’s inappropriate 2012 hire by The Guardian. How that played out was well covered here at firedoglake.

The author’s antipathy toward any sort of faith-based state is well known. The book amplifies on his reasons for this, which are certainly in line with mainstream American ideas and ideals. Although he has a vision of a civil society vastly different from the one sought by so many hardline militant expansionist Zionists, I must say that Mr. Abunimah has put far more thought, far more humane substance into what he sees as a “single-state solution” than has anyone else whose writing I have encountered. Near the end of the book, he harks back to arguments he made in his 2007 book, One Country: A Bold Proposal to End the Israeli-Palestinian Impasse. That book drew evidence from the Irish and South African experiences to illustrate how seemingly intractable civil conflicts can be put aside, and comity developed that almost seemed inconceivable earlier:

It is possible to begin to lay out principles that can guide such an approach. Inspired by the South African Freedom Charter and the 1998 Belfast Agreement, a group of intellectuals that included Palestinians and Israelis set out similar principles in the 2007 One State Declaration:

The historic land of Palestine belongs to all who live in it and to those who were expelled or exiled from it since 1948, regardless of religion, ethnicity, national origin or current citizenship status;

Any system of government must be founded on the principle of equality in civil, political, social and cultural rights for all citizens. Power must be exer- cised with rigorous impartiality on behalf of all people in the diversity of their identities.

Mindful that decolonization extends far beyond notions of formal equality and repre- sentation, the declaration insists that “there must be just redress for the devastating effects of decades of Zionist colonization.” Finally, the notion that Israeli Jews can be legitimate residents on the condition that they shed their colonial character and priv- ileges derives directly from the traditional conception of Palestinian self-determination, which is inclusive and rights-based, not ethnic or religious. Indeed, Arafat embodied this in his 1974 UN speech, declaring that “when we speak of our common hopes for the Palestine of tomorrow we include in our perspective all Jews now living in Palestine who choose to live with us there in peace and without discrimination.”

This book helps keep me aware that when so much seems to be going off the rails, people of vision such as Ali Abunimah truly is, can force or help impel a change of direction, open a new, creative channel.