What is Really Behind the Ukraine Crisis

Russia’s reaction to the move to overthrow Ukraine’s government, take it into the EU and from there, probably into NATO was the most predictable thing in the world, just the sort of thing that George H.W. Bush, Kohl, Mitterrand and yes, even Margaret Thatcher wanted to avoid. In American terms imagine Washington’s reaction if a Panamanian Hugo Chavez allied Panama with Cuba, filled the Canal Zone with Cuban advisers and threatened to close it… the marines would be there the next day. That is more or less what the Ukraine means to Russia. So Putin reacted in a totally predictable way. History is full of great wars that began with less cause. It is logical to think that the result we have before was calculated to benefit someone. Why deliberately take the risk of cornering a major atomic power in its traditional space?

Does unrest in Ukraine help the United States undermine China?

Why would anyone else but Russia take such enormous risks for such a broken, corrupt, mess as Ukraine?

When you want to understand a major international crisis, or almost anything else for that matter, one of the first things to do is to take a step back and try to fit it into the “big picture”.

In international affairs, that is best done by reading history and studying maps.

The Ukrainian crisis is splitting Europe apart and turning Russia into an “enemy” again.

When I step back and look at maps and history, I come to the conclusion that Ukraine is merely a handy tool in a much larger operation, which is to interrupt and foil any and all efforts by the Chinese, Russians and the Europeans to create a Euro-Asian “prosperity sphere”, bringing fluid movement of goods to and from China, by land from Europe across Russia and Asia. Think of all the synergies of European added value, brands and know how, combined with Russia’s natural resources and technology all plugged into China’s enormous markets and efficient mass, low-cost manufacturing.

The only real obstacles to this flow, Asia/Europe/Asia are political and even during the Cold War it went on quite a bit. For example, in the 1960s, before cheap flights, many Japanese students who wanted to visit Europe, used to take the boat from Japan to Vladivostok, from there the Tran-Siberian Express to Moscow, thence to Warsaw and finally Paris. In those same years a Canadian friend of mine made his first trip to India in a Volkswagen minibus.

It worked like this: a German fellow used to buy second hand minibuses in Stuttgart, load them up with hippies to pay the gas and then drive all the way to India, sell the bus (it was illegal to import them into India and he sold them for an enormous profit) and then he’d fly back to Germany and start the process all over again.

The bus full of hippies drove through the Shah’s Iran, from there though Afghanistan, where, before the CIA invented the Taliban and Al Qaeda, Kabul was filled with girls in miniskirts and cheap opium and hashish (hippy paradise) and from there across Pakistan and into India.

Off and on going back to Marco Polo and beyond, that is how the world more or less worked; interrupted by an occasional crusade now and then: caravans buying and selling across frontiers, languages and cultures, for hundreds and hundreds of years.

Analyzing how and why that is no longer possible would teach you volumes about modern history and its mechanisms.  The idea of fluid communication and trade Europe/Asia/Europe is nothing new, it is like the law of gravity… What is abnormal are the obstacles: they are all political.

With that in mind let us look at China’s “New Silk Road” initiative, which, with all the hoohah in Ukraine, is getting very little coverage in the press these days. Some of my readers will only know “Silk Road” as a website where drugs can be acquired  anonymously, but the original Silk Road story is a bit more interesting than that. You can read up on the original version in Wikipedia. 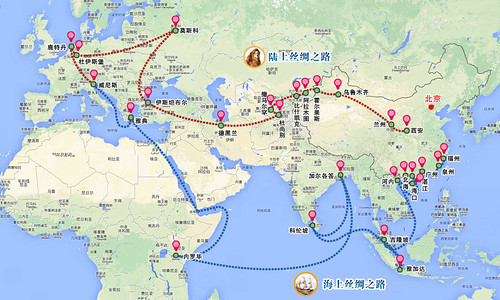 Before going on it would be well to remember that the World Bank expects China to become the world’s largest economy sometime in 2014:

Many economists expect China to eclipse the U.S. as the world’s largest economy sometime in the next few decades, but new World Bank data suggests that the transition could come much sooner. Is China ready now to assume its spot as the world’s No. 1 economy? If so, what does it mean for the U.S., investors, and you? —Motley Fool

With that in mind read the following:

The maps of the two Silk Roads drive home the enormous scale of the project: the Silk Road and Maritime Silk Road combined will create a massive loop linking three continents. If any single image conveys China’s ambitions to reclaim its place as the “Middle Kingdom,” linked to the world by trade and cultural exchanges, the Xinhua map is it. Even the name of the project, the Silk Road, is inextricably linked to China’s past as a source of goods and information for the rest of the world. —The Diplomat

Here is how it connects to Europe:

DUSSELDORF, Germany, March 29 (Xinhua) — Chinese President Xi Jinping Saturday called on China and Germany to work together to build the Silk Road economic belt. Xi made the remarks during a visit to Port of Duisburg, the world’s biggest inland harbor and a transport and logistics hub of Europe. He said China’s proposal of building the Silk Road economic belt, based on the idea of common development and prosperity, aims to better connect the Asian and European markets, will enrich the idea of the Silk Road with a new meaning, and benefit all the people along the belt. China and Germany, at the opposite ends of the belt, are two major economies that serve as the driving engines for economic growth respectively in Asia and Europe, Xi noted.

How does Russia fit into this? Now look at this map: 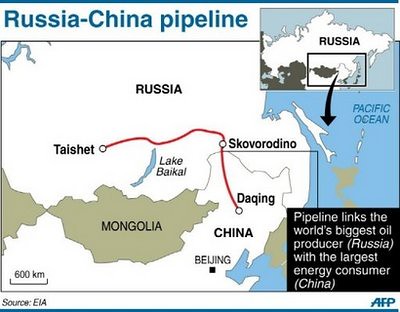 What or who is missing in all these maps and snippets?

The United States of America, that’s what.

The USA is nowhere in this picture… out of the loop… We can’t have that can we?

Photo by Rutenien Ruthenia released under a Creative Commons license.

What is Really Behind the Ukraine Crisis