I’m a little astonished at the ignorance, or deliberate not understanding, or spin, of the working of the internet.

For years, edge providers — Pandora, Google, LinkedIn, Facebook, WhatsApp, to name just a few — have flourished from the government’s hands-off approach to the Internet. Both Republicans and Democrats championed a structure that allowed the “application layer” of Internet architecture to be free from government intervention, apart from occasional Federal Trade Commission activity. That is now subject to change.

I am deeply concerned by the announcement that the FCC will begin considering new ways to regulate the Internet. As I have said before, my view is that section 706 does not provide any affirmative regulatory authority. We should all fear that this provision ultimately may be used not just to regulate broadband providers, but eventually edge providers.

Now to use the OSI network architecture model to illustrate the internet: 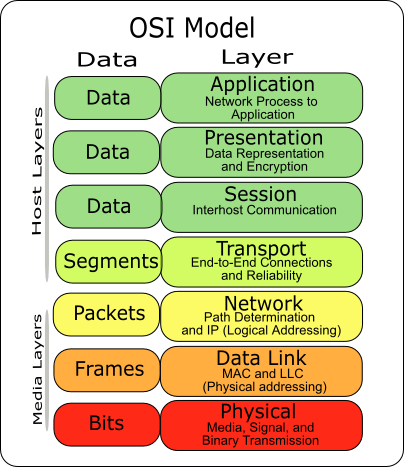 Layers 1 though 3 are “network” – transport: analogous to an envelope proceeding though the US Mail. To be specific Layer 3 is the IP layer and is the ROUTING layer of the internet. Equivalent to the Postal Service’s fleet of trucks, moving mail.

Layer 4 is “transport” – Performs a function similar to Certified Mail with a return receipt.

Layer 7 is application – the information, content (and databases) use to provide information in a web page.

Net neutrality is about equal treatment at the NETWORK layers, and equal ACCESS through the network to the applications.

It contuses the issue to bring in the “edge” providers, because their value is in layers 6 and 7, and I personally do not believe there is ANY intention to regulate the so called “edge providers.” which I’d call “APPLICATIONS.”

AT&T in its filing makes the same nonsensical comparison in its letter to the FCC.