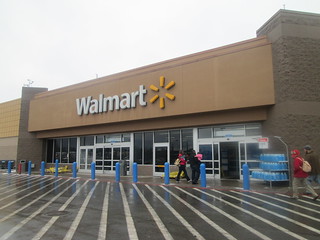 Despite falling revenues, and despite only reluctantly paying minimum wage to its workers, Walmart increased the pay for its top executives.

Sometimes the effects of our social and income inequality are easy to see, but hard to measure.

This is what Thomas Piketty’s theories look like in practice.

Some Background from a Real Economist

The inequality is driven by two complementary forces.

By owning more and more of every thing (capital), rich people have a mechanism to keep getting richer, because the rate of return on investment is a higher percentage than the rate of economic growth. This is expressed in Piketty’s now-famous equation R > G. The author claims the top of layer of wealth distribution is rising at 6-7 percent a year, more than three times faster than the size of the economy.

At the same time, wages for middle and lower income people are sinking, driven by factors largely in control of the wealthy, such as technology employed to eliminate human jobs, unions being crushed and decline in the inflation-adjusted minimum wage more and more Americans now depend on for their survival.

A key question for detectives trying to figure out who may have committed a crime is to ask cui bono, “Who benefits?” Who stands to profit from a murder, from a crime? That’s often your perp.

In Walmart’s case, it is not its stockholders who profited. Indeed, this has not been a money year for Walmart shareholders. Despite an overall good twelve months for the stock market in general, Walmart stock bumbled due to lower sales growth.

No joy for Walmart’s customers, or its own employees. Walmart cited cuts in federal food stamps as one reason for its weak sales increase. Since they are paid only minimum wage (and Walmart fights vigorously against any increases) and only are given 39 hours a week or less so as not to qualify for full-time benefits, a fair number of Walmart’s own workers receive food stamps.

Good news though for Walmart’s top executives. The company employed some accounting tricks to “adjust” on paper actual revenues to make them appear higher than in reality. On the strength of that “adjusted” performance, William Simon, CEO of Walmart’s United States unit, received total compensation of $13 million last year. Of that, $1.5 million was a “performance bonus,” paid out actually for declining revenues. In fact, six of Walmart’s top executives received a total of $8.42 million in cash incentive payments for 2014 even as revenues fell and the company closed stores. The former employees of those stores, needless to say, did not receive any performance pay bonuses as they fell deeper into poverty.

Walmart’s executives receiving these bonuses are the equivalent of a sports team getting paid extra because they lost. And we know that only happens when a game is rigged, right? How much more clarity into how the New Economy works do you need? More? Well, just wait for Walmart’s next earnings report and you see who is shaving points for their own benefit.