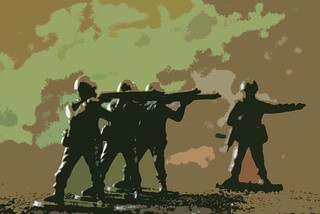 These Militias will relieve states of the expense and embarrassment caused by use of untested execution drug cocktails.

To everybody’s’ surprise the NRA has announced that guns in the hands of people can kill.

Guns do not kill people, however in the people’s hands there is always the remote possibility that someone could be killed by accident. So remote that there is more risk from tornadoes than guns, and much more risk for those weapons of mass destruction, automobiles.

When used appropriately guns can kill. Used by the military they do an excellent job on the battlefield, sometimes even killing enemies. When used by law enforcement there is a slight possibility guns used correctly can even kill violent criminals, especially those at home armed with a dangerous beer.

We all know that guns are extremely effective at killing teenagers armed with a concealed can of iced tea. That is well documented. These appropriate uses of guns are not the subject of our second amendment discussion today.

The NRA proposes to form Militias of armed citizens to carry out swift and effective executions in our Correctional Institutions.

These Militias, used as Firing Squads, will relieve states of the expense and embarrassment caused by use of untested execution drug cocktails, because we are absolutely certain our bullets are tried and true, with a long history.

To remunerate these volunteer worthies for their service to the state, we propose that the state provide the bullets they use, complete with tax credits for bullets used for target practice. This use of guns is well documented, effective and relatively but expensive (unless you include the tax credits).

We believe serving members of the Militia Firing Squads are practicing their second amendment rights, and should be provided every opportunity to receive both free ammunition (for the Militia) and tax credit for (Practice) ammunition, up to 100,000 rounds per weapon per year.

We believe these well-armed citizens, as part of a well ordered militia, will be experienced and well-trained after they use 2,000 rounds of ammunition for practice every week.

To fulfill the need for complete disclosure the NRA executive have an option to purchase the third largest ammunition suppler in the US, to help the Militated Firing Squads fully execute their duties.

The new slogan for the NRA’s campaign is: Guns Out, doing Duty first, or as acronym: GOD first.