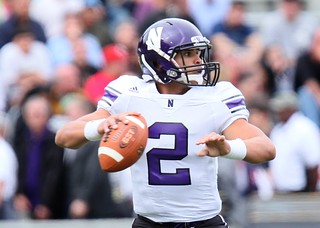 Back in 2001, in an episode of The West Wing entitled “Ways and Means,” the Bartlet administration was being investigated for keeping the president’s medical condition a secret. The investigation was hurting the White House in other areas, as the White House looked wounded and on the defensive. The special prosecutor was running a quiet, professional investigation, and it drove the White House nuts, especially Leo McGarry, the chief of staff.

Leo, we need to be investigated by someone who wants to kill us just to watch us die. We need someone perceived by the American people to be irresponsible, untrustworthy, partisan, ambitious, and thirsty for the limelight. Am I crazy, or is this not a job for the U. S. House of Representatives?

I don’t know that Northwestern University quarterback and union organizer Kain Colter ever saw this episode, but it sure looks like he’s taken her advice — and unions throughout the country ought to thank him for it.

When the NU football team served notice to the NLRB that they wanted to form a players union, the general reaction in the sports world was “Ha!” All that changed, however, when the NLRB hearing officer not only approved their petition, but wrote a strong and sweeping opinion to explain and support his ruling. As Brian Phillips wrote at Grantland,

[The ruling is] the biggest blow ever dealt to the NCAA’s self-serving amateurism rules. As blows go, it’s not quite fatal, but it’s at least staggering — picture a knight in shining armor getting clocked in the chest with a sledgehammer. It says that legally, the cheap façade that Northwestern football players are primarily seen by their university as young minds on an odyssey of learning is just that, a façade. It says that Northwestern football players are working for the school. It says that they’re thus entitled to some of the basic economic rights you and I take for granted, like the right to negotiate their compensation.3

What also matters, though, is the clarity of the explanation in the decision written by NLRB regional director Peter Sung Ohr. Ohr put aside the accumulated decades of fake idealism and rhetorical obfuscation and laid out the — again — really, really obvious facts:

Officially, the opposing party to the players in the hearing was Northwestern University, but the real opposition is the National College Athletics Association — the NCAA. Which brings us back to CJ Cregg.

The only thing you’d need to add to “irresponsible, untrustworthy, partisan, ambitious, and thirsty for the limelight” to properly describe the general opinion of the NCAA would be “greedy as hell” — and everyone outside the NCAA’s bubble knows it.

Now, thanks to Colter and his teammates, all week long I’ve been hearing comments on sports radio and television like “I’m no fan of unions, but I HATE the NCAA. Go Northwestern!”

Last Monday, after the Kentucky basketball team beat Michigan to advance to the Final Four the night before, Deadspin’s Tom Ley made a cogent observation:

Aaron Harrison’s game-winning three that put his team into the Final Four may very well end up being the iconic shot of this tournament. It was also a shot that that put a lot of money in a lot of people’s pockets, and none of them is named Aaron Harrison.

The lesson for union organizers is clear: pick the right enemy.

Most folks seize on the issue of players being paid, but Colter and others have been clear that their biggest concerns are things like medical coverage for injuries that might take years to emerge, or guarantees of support to finish a degree.

If the NCAA wanted to push back against the players by reinforcing the notion that these are students first and education is the first priority of the NCAA and its member schools, it’s not like they don’t have any options. Instead of worrying about the lease on a football player’s off-campus housing, they could limit the compensation of the head coach to, say, 150% of the average salary for a full professor. (The Chronicle of Higher Education has a helpful searchable database of school by school figures here.) For a bit of perspective, at the University of Kansas  the average compensation for full professors at KU is $118,300, while basketball head coach Bill Self gets $3,865,000 a year in compensation (plus incentives and a lump sum longevity payment if he stays through the whole contract) — almost 33 times higher! There are whole departments with salary budgets smaller than what Self takes home. Self’s not alone — in forty of the fifty states, the highest paid employee in state government is either a football coach or a basketball coach. Don’t tell me this is because we value education so much.

For the record, I don’t expect the NCAA to impose limits on coaching salaries any time soon. They’ll slit their own throats before they do that.

Unions take a lot of flak for myths about what they do (or do not do), but Colter and his teammates are reminding folks — even anti-union folks — that the first purpose of a union is to protect its members from irresponsible, untrustworthy, partisan, ambitious, and thirsty for the limelight, greedy-as-hell employers.

Picking the right enemy, like the NCAA, makes that a whole lot easier.