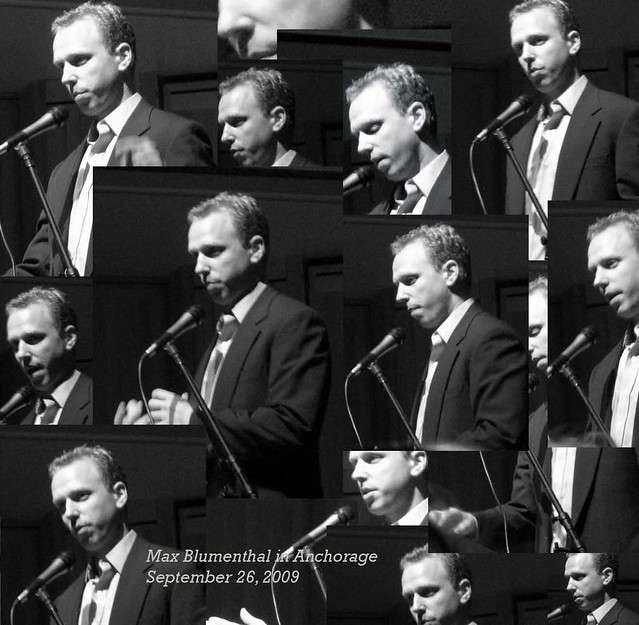 Author, journalist and videographer Max Blumenthal participated in the debate before the University of Michigan’s Central Government Council, on March 25th, regarding possible divestment from companies that profit from Israeli occupation of Palestine, and repression of Palestinian society. He was the leadoff presenter for Michigan Students Allied for Equality. Blumenthal spoke for just under thirty minutes. It is one of the most powerfully passionate speeches I’ve ever heard on Palestinian rights and what that should mean to colleges in the United States, whose investments are intertwined with elements of the illegal occupation by Israel of the West Bank, and with the draconian blockade of the Gaza Strip.

Today, Mondoweiss carried an essay by Blumenthal, titled “‘A Painful Price’: The escalating war on Palestine solidarity at U of Michigan and beyond.” In the article, he describes the intimidation tactics used against some of the student coordinators for Michigan Students Allied for Equality. His findings are somewhat disturbing. In the midst of accusations against a number of the student activists of intimidation, the activists are themselves undergoing organized intimidation tactics:

During SAFE’s week-long sit-in, a close-knit group of pro-Israel students filed a series of incendiary accusations against SAFE members, accusing them in formal reports to university administrators of delivering anti-Semitic tirades laced with antiquated terms like ‘kike’ and ‘dirty Jew.’ At the same time, Facebook profiles belonging to SAFE members were invaded by a mysterious account named ‘ZPC Viper Matrix.‘ Personal information of SAFE members, their families, and Palestine rights supporters across the country including American Studies Association President-elect Lisa Duggan have appeared on the Viper Matrix Facebook page, often in distorted form alongside derogatory comments, prompting several students to cancel their accounts.

Among those who told me their profile photos and personal information were uploaded at the Viper Matrix page was Sharifah Abdallah, a Palestinian member of Loyola University’s Student Government Association who has actively supported Loyola SJP’s divestment campaign. ‘People are scared in my community,’ Abdallah remarked to me. ‘Unlike other Palestinians from the diaspora, we return frequently to our land. So these tactics are designed to silence us by making us afraid that we won’t be allowed back in to Palestine.’

Blumenthal, in his Mondoweiss article, recounts many other intimidation episodes. Please read it. Especially chilling are Blumenthal’s concluding paragraphs:

‘Only the threat of civil lawsuits, federal investigations of civil rights violations, and alumni threats to withhold gifts will force university administrations to take action against the anti-Semitic thugs that are instituting a reign of terror at university after university,’ Glick wrote.

Declaring Northeastern’s suspension of its SJP chapter to be ‘minimal,’ she called for the mass firing of campus police officers who enforce university rules around Palestine-related events. Finally, Glick demanded that Students for Justice in Palestine be ‘permanently barred from operating on campus.’

Though they are far from realizing their draconian goals, Glick and her allies are setting a clear precedent at Northeastern, Michigan, and beyond.

Speaking from an ornate room in Washington DC’s Russell Senate Office Building, Marcus described the seminar as ‘the first public event inaugurating phase two of Title VI reform.’ Sitting alongside him were Campus Watch Director Winfield Myers, National Review Online columnist Stanley Kurtz and Tammi Rossman Benjamin, Amcha Initiative co-founder and a member of the Brandeis Center Academic Advisory Board. The panel was introduced and moderated by Sarah Stern, founder and president of EMET and a member of the Islamophobic Clarion Fund’s advisory board.

Using the seemingly benign terminology of ‘Title VI reform,’ Marcus and his fellow panelists laid out the blueprint for a right-wing pro-Israel attack on federal funding for Middle Eastern studies programs. By using amendments to Title VI of the Higher Education Act that were originally created to police programs deemed too critical of of US foreign policy following 9/11, Marcus and his allies are seeking to pull federal grants from Middle Eastern studies programs they deem overly critical of Israel.

Blumenthal, in his article, describes such tactics as “a desperate but determined fighting retreat.” He is correct in this characterization. In the struggle by students nationwide, in Canada, in the United Kingdom and in Europe, who support Palestinian civil rights, the victories by these activists are growing in number. At the University of Michigan, the student activists failed to get their resolution passed. But each week, more and more campuses are taking up this matter, some with marked success.

Expect the Zionist tactics to get more nasty and desperate by the month.