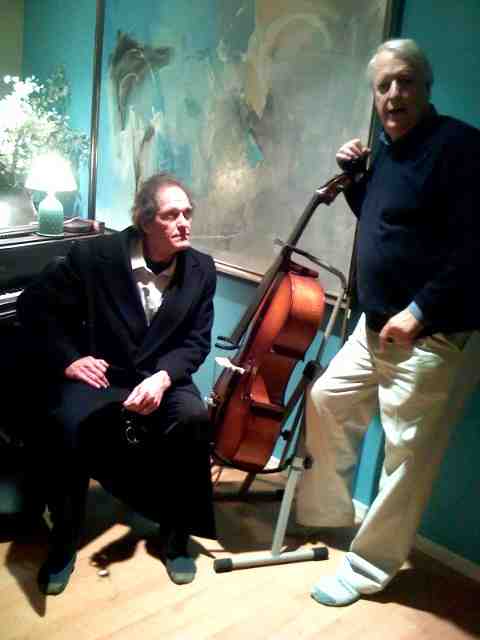 NEW YORK — Joe McGinniss, the adventurous and news-making author and reporter who skewered the marketing of Richard Nixon in “The Selling of the President 1968” and tracked his personal journey from sympathizer to scourge of convicted killer Jeffrey MacDonald in the blockbuster “Fatal Vision,” died Monday at age 71.

McGinniss, who announced last year that he had been diagnosed with inoperable prostate cancer, died from complications related to his disease. His attorney and longtime friend Dennis Holahan said he died at a hospital in Worcester, Mass.

I got to first meet Joe in the fall of 2008 (at the time of the above image, taken by my wife, Judy Youngquist), when he came to Alaska right after the presidential election campaign. He was contemplating writing a book about Sarah Palin, and hung out a lot with the Alaska progressive bloggers, who were at that time a close team of colleagues. I had read The Selling of the President, Going to Extremes, Fatal Vision, and Blind Faith, and had followed the controversies surrounding the latter books over the years.

We started writing back and forth occasionally, through email.  He often wrote to me after I had posted another installment in my long-running Saradise Lost series of articles.

In the spring of 2010, he came to Wasilla, Alaska, where he moved into a small lakeside house directly adjacent to the Palins’ cult compound. I helped him set up his own security perimeter, with signs, chains, padlocks and other stuff. My dog went over and pissed, possibly pooped on the Palins’ lawn. Joe was disturbed. I wrote about it, and Joe got more disturbed. We ended contact abruptly. The rest of the time he was in Alaska.

He could be prickly. So can I.

By the time he finished his book on Palin, we were back into regular correspondence. He named me or quoted me fairly extensively in The Rogue. Just before publication, McGinniss asked me to promote the book here at Firedoglake‘s book salon. We did that session on September 25, 2011.

Joe told me he was ill fairly early on. He stopped writing back to me sometime last fall. Just last week, I wondered aloud to my wife how he might be doing. And Sunday evening, watching Sarah Palin’s bizarre CPAC rant, I hoped he was enjoying it. It was Palin’s very best truly awful speech yet.

Before The Rogue‘s publication, Palin had already self-destructed after the Tucson massacre of  early January, 2011, when she blathered about critics of her target meme aimed at severely injured U.S. Rep. Gabielle Giffords’ 2012 campaign, as committing “blood libel” against Palin:

But Joe’s book was instrumental in putting what should have been the final nails in Palin’s political coffin. Too bad the spikes weren’t crafted in silver, eh?

As Palin re-insinuates herself into the lizard brain of paleo-conservatives, with her Putin putdowns and 8th grade snark, the headline to the New York Times review of The Rogue frames McGinniss’ last project well:

Sarah Palin Could See This Guy From Her House

Glad to have known you, Joe McGinniss.