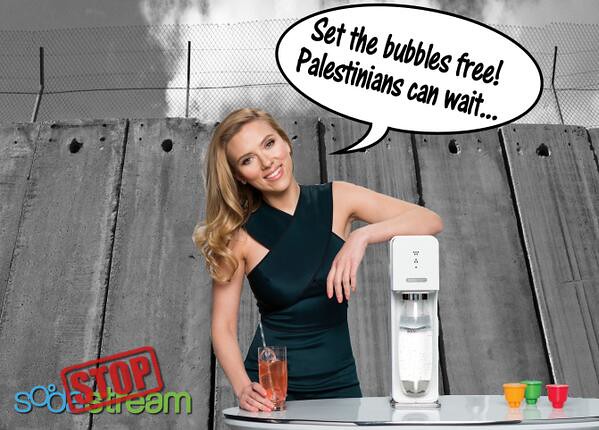 Actress Scarlett Johansson‘s next premiere will be in an ad aired at Super Bowl XLVIII, on February 2nd, during the 4th quarter.  The sponsor, Sodastream, is an Israeli company whose main facilities are illegally located in Area C of the Occupied West Bank of Palestine, in the industrial zone known as Mishor Adumim.  Her involvement with a company being boycotted by the Global BDS campaign and others has garnered some attention since the relationship was announced earlier this month.  Most criticism has centered around Johansson’s volunteer role as a spokesperson and activist for Oxfam, a 72-year-old NGO that works to “find solutions to poverty and related injustice around the world.”  Oxfam regards Israeli industrial activity in the Occupied West Bank as illegal.  Such conflicts with Oxfam volunteers have come up in the past:

Oxfam objected in 2009 when another ambassador, the American actress Kristin Davis, agreed to endorse Ahava, an Israeli cosmetics company that also has a factory in a West Bank settlement. After a wave of negative publicity, Ahava and Ms. Davis quickly parted ways.

Oxfam is in touch with Johansson about the conflict.  Her niche at the NGO’s web page had this added late Wednesday:

We are proud of our relationship with Scarlett Johansson who has worked with Oxfam since 2005 to support Oxfam’s mission to end poverty and injustice. As an Oxfam Global Ambassador, she has travelled to India, Sri Lanka and Kenya to highlight the impact of traumatic disasters and chronic poverty, and she has helped to raise critical funds for life-saving and poverty-fighting work around the world. We deeply value her support.

Oxfam respects the independence of our ambassadors. However Oxfam believes that businesses that operate in settlements further the ongoing poverty and denial of rights of the Palestinian communities that we work to support. Oxfam is opposed to all trade from Israeli settlements, which are illegal under international law.

We have made our concerns known to Ms. Johansson and we are now engaged in a dialogue on these important issues.

Up until late Thursday the story hadn’t been covered by any major U.S. media outlets. The Electronic Intafada and Mondoweiss have both run a number of articles on this through the week.  But Thursday, the New York Times posted a detailed article on-line about the controversy.  Super Bowl commercials are big deals in the advertising and endorsement worlds.  Sodastream has posted Youtube and other media promoting the upcoming commercials:

I have a number of questions on this that haven’t yet been answered:

1.  Was Johansson aware of the true state of affairs for the Palestinian workers at the Mishor Adumim factory when she signed on with Sodastream?  Last year, Sodastream posted a video touting the boon Sodastream’s illegal facility is for Palestinians who are employed there.  An anonymous worker refuted the claim at Electronic Intifada:

A professionally-produced video recently appeared on YouTube, taking the viewer on a carefully-constructed tour of the production facilities for the Israeli companySodaStream, manufacturer of carbonated drink machines.

The 8.5-minute video focuses on the firm’s factory located in Mishor Adumim, the industrial zone of the illegal Israeli settlement Maale Adumim in the occupied West Bank, and its Palestinian workers. The underlying message throughout the video is that the company’s settlement factory is a “fantastic sanctuary of co-existence” and, despite being built on stolen Palestinian land, is beneficial to the Palestinian economy and workers.

The video was recently shown to M., a Palestinian employee of SodaStream who has worked on the assembly line at Mishor Adumim for a long time and lives under Israeli occupation in the West Bank. M. spoke to The Electronic Intifada on condition of anonymity.

His immediate reaction to the blissful setting presented in the video was one of shock.

“I feel humiliated and I am also disgraced as a Palestinian, as the claims in this video are all lies. We Palestinian workers in this factory always feel like we are enslaved,” M. said.

2.  Was Johansson aware that this lucrative product endorsement would most likely lead to a severance of her relationship with Oxfam?

3.  When working with Johansson on coming into a contract, was she informed by Sodastream’s agents, who must have been aware of a potential hazard, of the huge possible liability to the actress’s future career being their spokesperson represents? They certainly should have done that.  Johansson may be under pressure from her team for more public exposure, but Sodastream is under intense pressure.  Partially from BDS effectiveness, partially because the company’s model may have flaws, their stock is down 50% for 2013.

I’ve been a fan of many of Scarlett Johansson’s roles since The Horse Whisperer and Lost in Translation.  If she had better agents she might have won a major film acting award by now.

Whether or not she was a victim of people running her career here or knowingly has become a major spokesperson for Israeli apartheid will probably become known within the next ten days.

Too late to pull the ads.  Can Scarlett handle this upcoming blood money role well enough to actually do something positive for Palestinians living under apartheid in the weird zone her employer exploits 24-7?

Scarlett Johansson has issued a statement which has been printed at Huffington Post.  It is brief and quite vague.  She does not appear to be ready to back away from SodaStream:

While I never intended on being the face of any social or political movement, distinction, separation or stance as part of my affiliation with SodaStream, given the amount of noise surrounding that decision, I’d like to clear the air.

I remain a supporter of economic cooperation and social interaction between a democratic Israel and Palestine. SodaStream is a company that is not only committed to the environment but to building a bridge to peace between Israel and Palestine, supporting neighbors working alongside each other, receiving equal pay, equal benefits and equal rights.

That is what is happening in their Ma’ale Adumim factory every working day. As part of my efforts as an Ambassador for Oxfam, I have witnessed first-hand that progress is made when communities join together and work alongside one another and feel proud of the outcome of that work in the quality of their product and work environment, in the pay they bring home to their families and in the benefits they equally receive.

I believe in conscious consumerism and transparency and I trust that the consumer will make their own educated choice that is right for them. I stand behind the SodaStream product and am proud of the work that I have accomplished at Oxfam as an Ambassador for over 8 years. Even though it is a side effect of representing SodaStream, I am happy that light is being shed on this issue in hopes that a greater number of voices will contribute to the conversation of a peaceful two state solution in the near future.

I’ll provide any further updates in the comments.