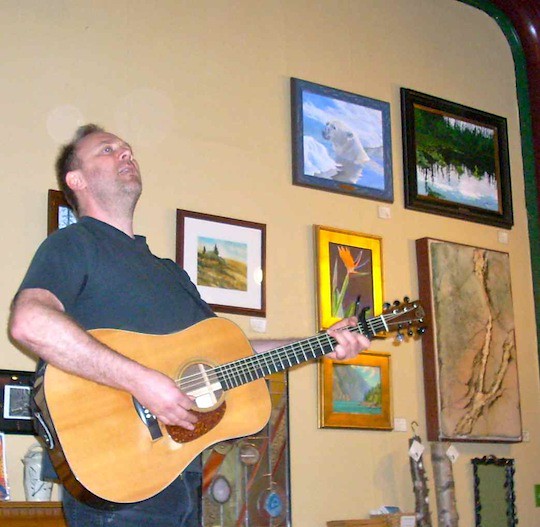 Two and a half years ago, minstrel and progressive activist David Rovics composed and recorded his Song for Bradley Manning.  The song and its official video were among the first credible works of art created in acknowledgement of the service Manning performed as whistleblower and patriot.

Since its creation, Rovics performed the song hundreds of times, in eastern, western, northern and southern hemispheres.  In an essay and iPhone video posted at his site Friday, he described how he came around to changing the song to reflect the reality of Chelsea Manning:

It’s humbling to discover that you’re not as righteous as you thought you were.  Not that this is the first time for me to discover that.  But the past 24 hours have certainly been one of those occasions in life, and I thought I’d share a little bit about that, in case that might be useful for anyone.

When my hero became my heroine and proclaimed that her name was now Chelsea and that she now wanted people to use the female pronoun, she gained a new support base.  Of course she had some trans supporters before she made this public announcement — people don’t fit into neat little boxes, and there’s lots of crossover in so many aspects of life, including political activism.  But Chelsea gained many wonderful, vocal new supporters in the trans community around the world, and sometimes when they encounter some of Chelsea’s non-trans supporters, perhaps particularly in generally alienating (I find) online social environments like Facebook, they often seem to encounter some spoken or unspoken version of the question, “well where were you before?”

I’m so sorry it took me so long to clearly answer that question for myself.  Where were they before?  Well, of course some of them were campaigning on behalf of Chelsea Manning, before she announced she was Chelsea.  And all of them — whether campaigning for Chelsea then, now, or never — were busy being members of one of the most marginalized, misunderstood, ostracized, attacked, murdered group of people on planet Earth.

And then, as people who already have to deal with life in a decidedly heterosexist world, when members of this community or people speaking in their support do something like ask me why I haven’t re-recorded the song I wrote about Chelsea, I have responded in various ways.  Sometimes I say I haven’t gotten around to it yet, or I can’t afford the studio time to do it right.  Sometimes, if someone presses the issue at all, I have reacted with defensiveness, with an attitude that said, “this isn’t important.”  I have reacted in ways that could perhaps be characterized as derisive.  And when other people have spoken up in my defense there on social media, I have sat by and not bothered condemning comments that were even more dismissive or derisive than mine.

Here is David Rovics, in his Song for Chelsea Manning.  He will come out with a more refined studio version soon:

(image: David Rovics at the Resurrect Gallery in Seward – by Philip Munger)