How Many Times Will Kerry Let Netanyahu Kick Him in the Nuts?

EdwardTeller
0 0
How Many Times Will Kerry Let Netanyahu Kick Him in the Nuts? EdwardTeller 2014-01-02

We don’t know yet.

“Netanyahu’s doing it because over the years he and most high-ranking Israeli officials have come to loath Americans.”

I.  Upon his return to do whatever he does in Israel and Palestine to push for some sort of a deal that both the Israelis and Palestinians can accommodate (an utterly impossible task), U.S. Secretary of State John Kerry was treated to this tirade by the Israeli Prime Minister:

A few days ago in Ramallah, President Abbas embraced terrorists as heroes. To glorify the murders of innocent women and men as heroes is an outrage. How can President Abbas says – how can he say that he stands against terrorism when he embraces the perpetrators of terrorism and glorifies them as heroes? He can’t stand against terrorists and stand with the terrorists. And I’m wondering what a young Palestinian would think when he sees the leader of the Palestinian people embrace people who axed innocent men and women – axed their heads or blew them up or riddled them with bullets – what’s a young Palestinian supposed to think about the future? What’s he supposed to think about what he should do vis-a-vis Israelis and vis-a-vis the state of Israel? So it’s not surprising that in recent weeks Israel has been subjected to a growing wave of terrorist attacks. President Abbas didn’t see fit to condemn these attacks, even after we learned that at least in one case – I stress, at least in one case – those who served and are serving in the Palestinian security forces took part in them.

Netanyahu is referring, in part, to the record of some of the imprisoned Palestinians whose release is being celebrated in the Occupied Territories of the West Bank. What he was doing, in the statement, was paying Kerry back for his moment of candor, when, back in early November, he warned:

John Kerry, the US Secretary of State, warned Israel on Friday that it faced a third intifada if peace talks with the Palestinians failed.

During a visit to Israel aimed at putting the faltering peace process back on track, Mr Kerry told Israeli and Palestinian television that the alternative to success was a potential eruption of Palestinian violence.

‘The alternative to getting back to the talks is the potential of chaos,” he said. “I mean, does Israel want a third intifada?’

It was strong language from America’s top diplomat, clearly frustrated at the lack of progress in a process in which he has personally invested considerable effort.

Using the Arabic word for uprising, it recalled the first and second Palestinian intifadas which ran from 1987 to 1993 and from 2000 to 2005. Each period of escalated violence claimed thousands of lives, with the toll particularly heavy on the Palestinian side.

The so-called “Peace Process” talks seem to be entering new levels of absurdity:

‘We’re not expecting a breakthrough on this trip,’ Martin Indyk, the State Department’s mediator on the conflict, said today in a supposedly-anonymous briefing on this week’s urgent round of peace talks in Ramallah and Jerusalem.

Indyk said there is no ‘agreement’ between the parties, but Secretary of State John Kerry is seeking an agreement on a ‘framework’ for continued talks, not so different from the Clinton parameters of 2000. Indyk, a longtime advocate for Israel, said part of the framework is a possible announcement of final borders of a Palestinian state:

We’re trying to reach an understanding on what the final borders will be.

The briefing was supposedly anonymous– ‘with a Senior State Department Official who will be previewing the Secretary’s trip to Jerusalem and Ramallah this week’– but the first clue to Indyk’s identity came when the anonymous official mentioned his ’35-year experience on this particular conflict.” Then the briefing’s unnamed moderator outed him: “It’s an agreement on the terms, as Martin said– right– which has not been achieved in the past, at least in recent history.’

The talks will never get past Israeli demands that Palestine recognize the land stolen from the latter as “the Jewish State,” and Palestinian demands for a level of autonomy that would give them the same degree of statehood as Belize, Andorra, Singapore or Bermuda, to name similarly sized countries.

II.  Netanyahu isn’t kicking Kerry in the nuts because Kerry deserves it. He’s doing it because over the years he and most high-ranking Israeli officials have come to loath Americans. Even though the Obama administration’s record of supporting Israeli policies is perhaps the most disgustingly pro-Israeli in our country’s history, that matters less to the Israelis than that Obama is black and that they can sow seeds of distrust toward him in our country through Republican politicians, and through Democrats up for close elections in red states.  Is that cynical, or what?

The most disgustingly anti-American, anti-Obama interview I’ve read this week comes from The Times of Israel, in an interview of former U.S. Ambassador Michael Oren with the Times‘ David Horovitz. Justin Raimondo, in his first 2014 essay, got to the heart of the anti-Americanism in the interview:

In tweeting this interview in the Times of Israel with former Israeli ambassador to the US Michael Oren, foreign policy maven Laura Rozen notes the ‘contempt expressed for [the] US in this interview by interviewer & interviewee [is] striking.’ The contempt comes through more on the part of the interviewer, although Oren joins in bashing the administration’s alleged lack of ‘competence’ in negotiating with Tehran. More importantly, Oren seems to recognize that there are ‘structural’ – as he puts it – differences between the US and Israel, i.e. a belated recognition of the fact that Israel and the US are two different countries with different interests after all. Says Oren:

‘You have to acknowledge that there is an American public out there, whose opinion is not always heard here because all you see are American leaders. You don’t often see the American public. We learned from the Syrian episode last summer (when Obama pulled back from a threatened punitive strike after the Assad regime’s use of chemical weapons) that that public can be pivotal in decision-making.’

Aha! The public! The forgotten factor in American foreign policy decision-making is – finally! – making a comeback. That’s good news for those of us in the US who want a more peaceful, less confrontational US policy in the Middle East and around the world – and decidedly bad news for the Israeli far-right government that has as its Foreign Minister a man who once threatened to bomb the Aswan dam.

Raimondo’s essay was about how dangerous the negotiations with the Iranians will be in 2014. His critique of Oren’s anti-Americanism is just, but Justin understandably ignores another part of the Times interview, in which Oren kicks the U.S. in the nuts for being skeptical of past Israeli wars of aggression:

You think there’s anything new with this? Why do you think it’s about Netanyahu and Obama. I come with one great advantage: I come with the historical perspective. [Israel’s first prime minister] Ben-Gurion in May 1948 is under immense pressure from the Truman administration not to declare a Jewish state. George Marshall is telling [president Truman] that the Jews are going to be wiped off the face of the earth if they do this. They’ll be defeated in three weeks. [Moshe] Sharett [the first Israeli foreign minister] goes crazy. Sharett comes back to Ben-Gurion and says, You can’t do this. George Marshall, the architect of the World War II settlement, says we’re going to be destroyed.

They want more time for diplomacy. Ben-Gurion has to make this terrible decision: Do I declare statehood? Existential issue for us. The risks are great. We may not have the Americans on our side.

But he did. And Truman overrode Marshall.

In 1956 — this is widely forgotten — what was the Suez Sinai campaign about? Suez Sinai was the product of an estimation made by Moshe Dayan, the chief of staff, and Ben-Gurion, that the Egypt army would within six months absorb the massive amount of Soviet weaponry given them under the so-called Czech arms deal, and that at the end of those six months, Israel would be faced with an existential threat. At the height of the Suez crisis, there’s international diplomacy going on all over the place; you’ve got John Foster Dulles, who’s no great Zionist, to say the least. Huge pressures, and Ben-Gurion has to make a decision.

1967, [prime minister] Levi Eshkol, same deal. [President] Johnson says do not do anything. Don’t go alone. We need time for diplomacy. Got to work with the international community.

Meanwhile, the Arab armies are gathering on our border. Eshkol gave time to exhaust diplomatic options. In the end, he had to do what he had to do.

Ex-Ambassador Oren is a noted historian. Among his books, his account of the 1967 Six-Day War is definitive, but flawed in its self-serving (toward Israeli) narrative. For instance, his timeline of the Israeli attack on the U.S.S. Liberty is flawed, particularly regarding the Israeli torpedo boat attack. I’ve written to him, asking for comments or clarification. He has never responded, nor has his publisher.

III.  The combination of Israeli ingratitude for what we have done for them and their longtime and continuing espionage and meddling in our affairs are beyond disturbing. They are possibly our greatest national humiliation in the history of our constitutional republic. Although Oren astutely describes how U.S. and Israeli interests often diverge, he has no empathy for how we or anyone else might not automatically empathize with what is increasingly becoming an openly apartheid, quasi-fascist state.

Netanyahu, railing about terrorists? Jesus fucking Christ in a manger! What do you call someone who helps rip the U.S. off for illegally obtained materials to build a nuclear weapon?

A Goddam fucking terrorist, that’s what. 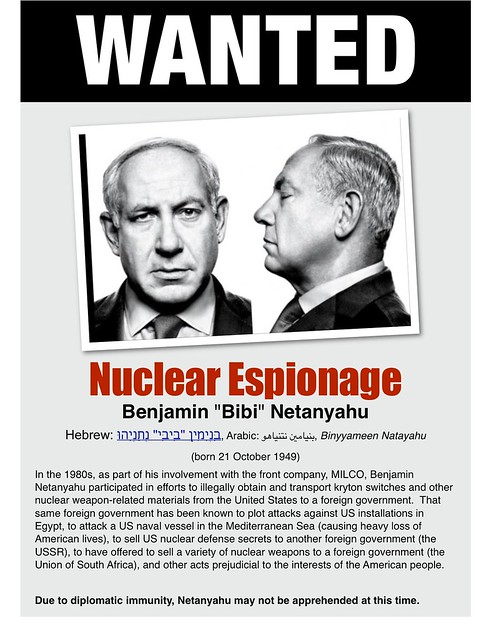 How Many Times Will Kerry Let Netanyahu Kick Him in the Nuts?