Reports from Wednesday’s hearing for Albert Woodfox of the Angola 3, to end strip searches 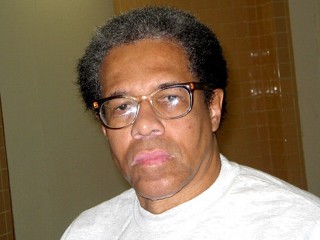 As you may remember, Albert’s first hearing seeking to bring an end to the inhumane, abusive, and illegal routine strip searches he is subjected to daily was postponed.  Now, after months of legal wrangling, Albert’s hearing happened today, November 13th, in Court before Judge Brady in the Louisiana Middle District Court in Baton Rouge.  Albert was present and testified.

With any luck Albert and his legal team will convince Judge Brady to uphold the consent decree that came out of a 1978 lawsuit Albert himself filed and won — establishing such searches as illegal, unconstitutional, and against internal prison policy.

On October 21, the International Coalition to Free the Angola 3 joined Amnesty International in delivering 50,000 signatures demanding Albert’s release to Governor Jindal’s office. Amnesty is still continuing their campaign, so if you have not done so, please sign the petition now and share it!
This morning the Times-Picayune published an Oped by Jasmine Heiss of Amnesty International, explaining that since March, the Louisiana corrections department has subjected “Mr. Woodfox to invasive strip and cavity searches every time he leaves his cell – when he goes to see the doctor, gets a haircut or uses the phone to call his lawyers.” Notably:

These searches are not only degrading, they’re illegal – and in a strange twist of irony, it was Mr. Woodfox’s previous lawsuit against the state that set this precedent.

That precedent, which lasted more than 30 years, came to an abrupt end when Judge LeBlanc died in March, and the strip and cavity searches quickly resumed both for Mr. Woodfox and others housed on his tier at David Wade Correctional Center. Mr. Woodfox endures strip searches as often as six times a day. He and his attorneys tried to resolve this without litigation for months to no avail.  Now they have turned to the court to step in. (read the full article here)

Along with this important oped, Times-Picayune writer Lauren McGaughy continued her excellent coverage of the Angola with a pre-hearing article published yesterday, that cites the request filed bu Woodfox’s lawyers:

“The Louisiana Department of Public Safety and Corrections has held Plaintiff Albert Woodfox…in solitary confinement for the past 41 years in violation of his constitutional rights,” the request for a temporary restraining order reads.

“In further violation of those rights, Defendants now strip search Plaintiff Woodfox and inspect his anus every time he enters or leaves his cell. These strip searches occur as often as six times a day.” (read the full article here)

This evening, McGaughy reported back from today’s hearing:

Testimony lasted all day Wednesday. In addition to Woodfox and Goodwin, David Wade guard Matthew Elmore and Pat Keohane, an expert for the state, also testified. At the end of the day, Judge Brady requested counsel file briefs detailing what would be the effects of adopting the 1978 consent decree approved under Judge LeBlanc.

[Woodfox’s lawyer Sheridan] England, speaking after the hearing wrapped, said he was confident the judge would rule in his client’s favor: “I’m happy Mr. Woodfox got an opportunity to talk about the deplorable strip searches he’s made to undergo everyday. We’re confident the court will find they violate the law.” (read the full article here)

Reports from Wednesday’s hearing for Albert Woodfox of the Angola 3, to end strip searches