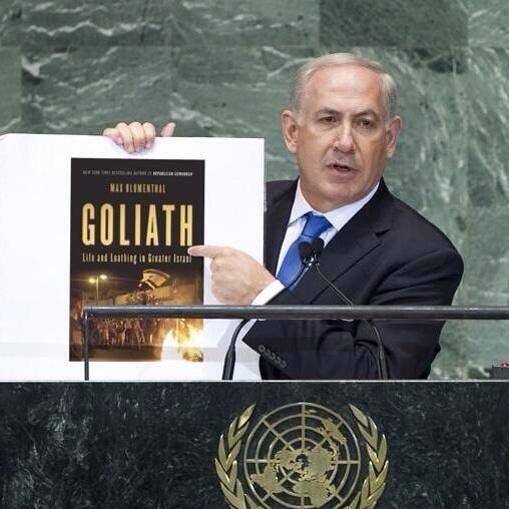 The initial attack on Max Blumenthal’s new book, released October 1st, Goliath: Life and Loathing in Greater Israel (currently No. 2 on Amazon’s history of Israel best seller list), was led by Eric Alterman, writing for the November 4th edition of The Nation.  Alterman condemned the book, using the now widely reported terms for it as “The ‘I Hate Israel’ Handbook,” and “Hamas Book-of-the-Month” selection.  Within days of Alterman posting his first critical essay at The Nation, he posted another.  Then, in response to detailed critiques of Alterman’s analyses of the book by Blumenthal and others, Alterman jumped in a third time.

Alterman initially refused to appear in any forum with Blumenthal, to discuss or debate the book’s content and subject matter, but has now indicated he might show up “for $10,000 plus expenses, paid in advance.”

Goliath has received a number of positive reviews.  Perhaps the most comprehensive was that by Chris Hedges, posted at Truthdig:

There are very few intellectuals or writers who have the tenacity and courage to confront this reality [the self-adulation and latent racism that lie at the core of modern Zionism].

This is what makes Max Blumenthal’s ‘Goliath: Life and Loathing in Greater Israel’ one of the most fearless and honest books ever written about Israel. Blumenthal burrows deep into the dark heart of Israel. The American journalist binds himself to the beleaguered and shunned activists, radical journalists and human rights campaigners who are the conscience of the nation, as well as Palestinian families in the West Bank struggling in vain to hold back Israel’s ceaseless theft of their land. Blumenthal, in chapter after chapter, methodically rips down the facade. And what he exposes, in the end, is a corpse.

Even as Alterman led the attacks, he was quickly outdone in the dismissive, yet somewhat shallow tone he introduced.   Wall Street Journal Assistant Book Editor, Sohrab Ahmari, announced on Twitter:

@Eric_Alterman rips to shreds @maxblumenthal‘s “Goliath,” of which two review copies currently sit in my trashcan.

What may have turned out to be the most disturbing element introduced by Alterman, was his bringing Max Blumenthal’s father, Sidney Blumenthal, into the argument.  What seemed to some as an innocuous comment in Alterman’s first article, has turned into a sordid campaign by even more sordid people, to attack both the elder Blumenthal, and Hillary and Bill Clinton, and their foundation.  The hits have devolved from Buzzfeed.com to Breitbart.com to white supremacist Robert Stacy McCain’s blog, as the threats have escalated.

In a follow-up blog post after the initial review, Alterman wrote that he had become the target of emails sent around by Blumenthal to friends and associates as a result of his review of the book.

‘I attribute to these friendly relations the fact that until now, Sid Blumenthal had not seen fit to make me the object of any of the unflattering e-mails he so often sends around to journalists and others — myself included — about individuals of whom he disapproves,’ Alterman wrote. ‘Privately, I worried that by telling the truth about his son’s book, I would soon hear of nasty e-mails about me sent by Sid to our mutual friends and professional acquaintances. Call it “bizarre,” if you will, but sadly, that’s just what happened.’

BuzzFeed obtained one of the Blumenthal emails from a source; it features a copied-and-pasted article from the anti-Zionist blog Mondoweiss, sent with the subject line ‘Fact-checking Eric Alterman on Goliath.‘ The article in question, by writer Phan Nguyen, calls on The Nation to retract Alterman’s review, describes Alterman as an “unreliable narrator,” and states that he has “undermined his self-proclaimed status as a conscientious critic of the Israeli occupation.”

Gray pursued the links between Sidney Blumenthal and the Clintons:

“We don’t know what you’re referring to,” said Clinton Foundation spokesperson Nick Merill when asked about the emails and whether Hillary Clinton is aware of Blumenthal’s defense of Goliath. He copied Clinton spokespeople Philippe Reines and Matt McKenna on his response to BuzzFeed, as well as Sidney Blumenthal.

The pressure on Billary and the foundation was stepped up on November 8th, with that estimable source, Breitbart.com, giving space, in an article by Joel B. Pollack, to Alan Dershowitz:

On Friday, Dershowitz told Breitbart News that Sid Blumenthal’s vociferous advocacy for his son’s book could damage Hillary Clinton’s widely anticipated run for her party’s nomination for president in 2016.

The article goes on to quote Dershowitz:

Max Blumenthal is well outside the acceptable range of rhetoric about Israel. His constant comparisons between Nazi Germany and the Jewish state establish him as an extremist bigot whose greatest appeal is to antisemites and others who apply a double standard to the Jewish state. Any political candidate who would associate himself or herself with such views would be unacceptable to Americans. In addition to being extremist in his anti-Israel views, Blumenthal is also vehemently anti-American.

I have long known his father and have worked with him. But even understanding how a father would want to identify with a son, no decent person should ever support the views expressed by Max Blumenthal. I would sincerely hope that Sid, while continuing to love his son, would completely dissociate himself from his son’s bigotry. And I ask decent people to ask themselves what they would do if they had a son who espoused views akin to those expressed by the KKK, Hamas and other antisemites. I would hope they would do the right thing and dissociate themselves from such views.

In light of the long association between the Clintons and Sid Blumenthal, I hope that the Clintons ask Sid to expressly disasscoate himself from his son’s views–and if he refuses to, that they no longer work with him on any matters. [emphases added]

If Breitbart.com‘s attack on Sidney Blumenthal wasn’t enough, white supremacist BFF Robert Stacy McCain (with whom I’ve had a few run-ins over the past four years) chimed in Saturday:

That video [a 2009 confrontation between Max Blumenthal and Andrew Breitbart at CPAC] came to mind today when I read an article by Rosie Gray of BuzzFeed about how Max’s father Sidney Blumenthal (notorious as a hatchet-man for the Clintons in the 1990s) had mounted a poison-pen campaign against liberal journalist Eric Alterman. Max Blumenthal recently published an anti-Israel book that compares Israelis to fascists and Nazis. Alterman negatively reviewed the book, and then was knifed in the back by his alleged friend.

Nearly every Muslim organization on earth fits the definition of “terrorist,” according to international law, including Hamas.

Unlike the reaction to Blumenthal’s first book, Republican Gomorrah, the so-called mainstream media continues to avoid dealing with the book at all.  This can be compared to interviews with the author by Abby Martin for RT TV, by Amy Goodman and Juan Gonzales, at Democracy Now,  and at firedoglake, where I hosted Max last week for a Book Salon Q&A session.

Meanwhile, more sympathetic reviews will be coming out.  Here is a link to Blumenthal’s Goliath book tour dates.