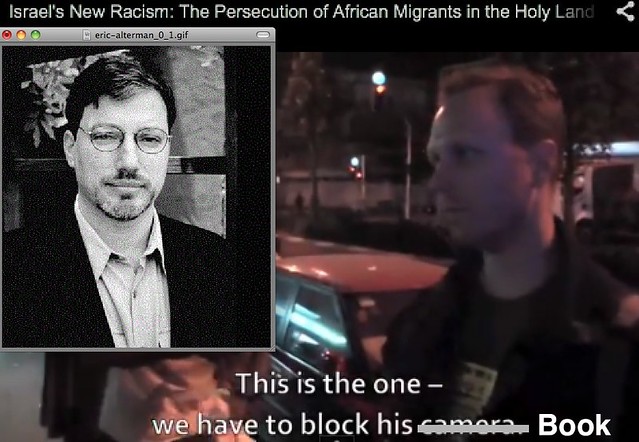 Mini pundit, Eric Alterman, has a long history of simply smearing journalist colleagues, when he can’t come up with a persuasive argument against their views.  Here’s Alexander Cockburn, over a decade ago, recounting one of his experiences with Alterman:

On the last Nation cruise I was on a panel about nuclear proliferation. (Yes, even afloat off Baja California, the liberal conscience is always on guard duty.) Trying to juice up the panel a bit, I remarked that there was one bit of proliferation that seemed to me indisputably okay, which was when the Soviet Union acquired the know-how to make A and H bombs, thus ending the US monopoly on Armageddon, and in my view making the world a safer place. (My position, very shocking to Jonathan Schell, is that every country should have at least one thermonuclear device, if necessary donated by the World Bank along with the “national” flag.)

Nation and MSNBC mini-pundit Eric Alterman was chairing the session. He immediately shed any pretense of neutrality. Was Cockburn, he snarled at the audience, seeing something commendable in the transfer of atomic secrets to the most evil man the world had ever known?

Which shows just how dumb Alterman is, since at least 2/3rds of the audience of Nation seniors, the only subscribers who can afford to pony up for these cruises, were either in the Communist Party or in close sympathy with it. A chill silence greeted Alterman’s ill-mannered interruption and then one old boy piped up angrily and said that it was the Red Army which saved the day for the Allies at Stalingrad. Then Jonathan Schell remarked that my position was identical to that of Sakharov.

Alterman ended up looking silly, and so I wasn’t too surprised when one of the Nation guests sitting next to me at dinner reported Alterman was going around saying I was an anti-Semite.

I have no idea how Alterman got from the subject of Soviet possession of nuclear weapons to anti-Semitism, but Alterman seems to gather comfort from hurling that term at people whose views don’t mix well with his own.

Alterman is a longtime detractor of Ralph Nader, being one of those who persist on blaming the Bush years on Nader:

Nader confused me by buying 1,200 copies of What Liberal Media? and distributing them to every student and faculty member of the Medill School of Journalism. He sent me a mimeographed note saying something like “What do you think of that, Eric?” I think the same thing I thought of the Iraq war, the destruction of the environment, legalized torture, domestic spying, the attack on the Constitution, on choice, on sex education, on science, etc. … “Thanks, Ralph.”

His blasts against Nader are often viewed as unreasonable.  Commentator John Walsh:

Since the documentary lets all sides speak their piece, two of Nader’s principal detractors, Todd Gitlin and Eric Alterman, are given considerable time to dispense their venom. In fact, after a half hour of interviewing, the director had to beg Alterman to talk some more, getting another five minutes out of him. This has not prevented Alterman from claiming that he was not given adequate time to spew his opinions. Both Alterman and Gitlin come across as very bitter men, capable of nothing more than ad hominem attacks on Nader. It is quite a disgusting sight, enough to forever disabuse one of any trust in these fellows.

…I don’t have a moral problem with it.

Hamas is clearly at war with Israel. Hamas feels empowered to strike Israeli civilians inside Israel proper and not just on the war zone of West Bank. Sheik Salah Shehada could have protected his family by keeping away from them. He didn’t and owing to his clear legitimacy as a military target, they are dead too.

In other words, Alterman justified the bombing with the following three points:

1. Since Hamas targeted Israeli civilians, the Israeli military had the right to kill Palestinian civilians.

2. It was Shehada’s fault for living with his family that resulted in his family being killed by Israel.

Alterman’s recent smear against Blumenthal is published in the November 4th edition of The Nation, where Alterman has been a writer for decades. The Nation is also the publisher of Max Blumenthal’s second book, Goliath: Life and Loathing in Greater Israel, which was released on October 1st.

Alterman is the first well-known commentator to damn Blumenthal’s book.  In reviews by  Publishers Weekly, M.J. Rosenberg, Al Monitor, and Huffington Post, the book has been either praised or given context that observes the quality of the many, many portraits contained in the volume’s 73 chapters.

Criticism of Alterman’s rant has been effusive from the anti-Zionist left, and from some who are more neutral on the issues dividing Alterman and Blumenthal.

The most direct replies to Alterman’s Nation essays on this have come from Alterman’s Brooklyn College colleague, political scientist Corey Robin:

Even if you haven’t read Blumenthal’s book, it’s not hard to see that Alterman is writing out of an animus he can’t get a hold of. His prose gives him away.

As it happens, however, I have written about Max’s book on my blog, and Alterman’s portrait bears little resemblance to the book I read.

Where Alterman finds only “juvenile faux-cleverness,” a “case against the Jewish state” that is “carelessly constructed,” reporting that is “technically accurate [!], but often deliberately deceptive,” arguments that are “simplistic and one-sided,” and “a profoundly unreliable narrator” who “nastily and condescendingly mocks” other reporters—more cowbell, baby!—I found a trove of patient and persuasive on-the-ground reporting (Blumenthal spent a year in Israel and Palestine and several additional months in the region), almost all of which Alterman ignores. Had he allotted less space to those adjectives and more to an engagement with the book, Alterman might have come up with a credible critique.

Here’s a link to Corey Robin’s initial review of the book.

I’m not finished with the 473-page book.  It is a compelling read, and I would have finished by now, had I more time away from work duties.  The book it reminds me the most of that I have read is Robert Fisk’s magisterial 2005 book, The Great War for Civilization:  The Conquest of the Middle East.  Both Fisk and Blumenthal present an extremely rich, almost cluttered set of episodes, in interlinked sets of chapters, as one subject after another is relentlessly, sometimes almost pitilessly pursued.  And like Fisk, Blumenthal’s remembrances and interviews are potent illustrations of the topics they seek to illuminate.  Perhaps Blumenthal’s is the better in terms of describing contradictions people expose as they open up to his questions.

The blog that has covered the Alterman fracas most thoroughly is Mondoweiss.  So far, they have published these articles on it:

What Eric Alterman most unreasonably failed to do in his review was tackle the basic premise of Blumenthal’s book:  That Israel was founded on a deeply racist colonial expansionist agenda; that ethnic cleansing is inseparable from Zionism; that this has always caused a cognitive dissonance among liberal and progressive Jews in Israel (let alone here or in Great Britain); and that with Israel’s inexorable ideological march to the fringes of the far right, the place is losing whatever soul it might once have possessed.  Alterman blinded himself from taking a responsible step by not addressing these inconvenient facts.  Even without Alterman’s invective, that in itself is quite a smear.

You can join Max Blumenthal here at the Firedoglake Book Salon, on Saturday November 2nd.  I’ll be hosting.  Maybe Eric Alterman can join us, to provide the depth to his review the review itself so fully lacked.

Here is the video the New York Times recently commissioned from Blumenthal (with David Sheen), which it then refused to run: