Over Easy: Feed Sacks and Roses 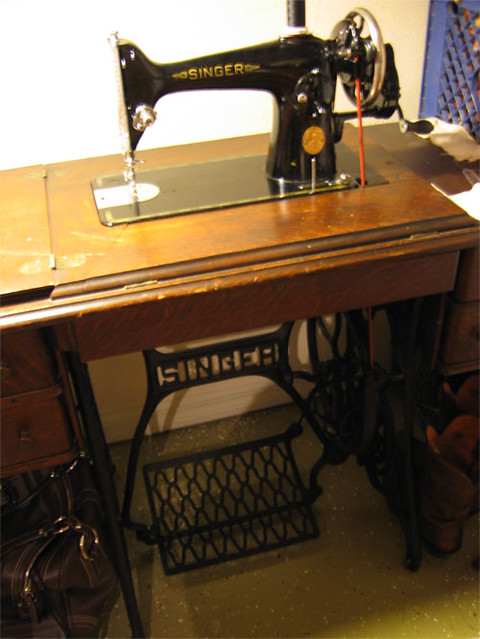 This is a nonfiction account of sewing, materials and clothing and how they progressed, from the late 1920s on a small Missouri farm, to the years beyond the war, as told by Letty Owings, age 88.

Massive change came to sewing over the years from the Great Depression to the post-WWII era, due to fabric importation from countries like China and India as well as the introduction of stretch (synthetic) fabric. The first time I really remember seeing a Made in China symbol, Ceau?escu was trading with Mao.

I first started learning to sew in 1929 when I was five and lived on a small farm in Missouri. I was fortunate, because my mother let me use the treadle sewing machine as soon as I could get up to it. Since we were so isolated on the small farm, I lived in a world of imagination and dolls, so I made doll clothes. When I reached the upper grades of grade school I started making children’s clothes for my aunt’s children, taking real pride in my work, and my aunt acted like she was grateful.

We washed our clothes with a scrub board (a washboard) and homemade soap. Our cleaning was not mechanized for many years because seclusion placed us behind the the times, but our first ‘washer’ was a hand-cranked wringer that we used to wring clothes that we had washed in a tub. Electricity did not extend to that rural area, even by the end of WWII. Our ironing board was made of wood.

The chicken feed industry figured out how popular the sacks were for clothing, and they put color prints on the hen scratch sacks. My mother made everything, even underwear and hats, from the sacks. She also dressed so that all of her skin was covered for picking corn, because a tan was considered ugly. My mother sewed the sacks and the remnant table scraps for many years. My prom dress was pink sharkskin with a black collar. We took the collar off, and the prom dress was my dressy dress after that.

People continued to sew from feed sacks even in later years. When I was first married and lived in Georgia, we had a visitor who asked for a bed sheet. We didn’t have a bed sheet, but I made one, by sewing four feed sacks together. A woman across the street in Georgia had figured out how to make money by sewing for rich people. She sewed for the Southern belles, and she taught me how to attach embroidered butterflies to a garment so the butterflies appeared to be flying. She taught me smocking and other sewing tricks. During this time, I would go to the fancy department stores and draw the patterns for kid’s clothes, then take the patterns to remnant places and use the drawings to make my kid’s clothes. Often, stores did not carry much variety in boy clothes, but I made boy and girl clothes.

No female ever wore pants in the years before the war. It was an absolute no-no, although when they started making wool pants for snow, my mother got me a pair for three dollars, to wear for bobsledding. During the Rosie-the-Riveter cultural icon era, where women wore slacks and heavy shoes to work in the war plants, wearing slacks never carried over to the home. Even boys sometimes wore little dresses. One permissible exception was that a female could wear pants to sled ride and ice skate. Incidentally, a fabric black market arose during the war effort, since fabric went to the 24/7 war plants.

I tore a hole in the butt of my three-dollar wool pants, bobsledding on the river bluffs with friends, but I never told my mother, because first of all, she would have known where I had been. When I taught in the tiny school I had attended, I once wore slacks in the snow during a one-hour break. The next day, a girl told me that her father had called together a family meeting and read a passage from the Bible to illustrate how unacceptable it really was, for me to wear pants.

In 1941, Ray, the man I would marry, was called to service in the war. He came to my house with a dozen roses, to let me know. I was wearing slacks, and I ran across the yard to greet him. My mother was horrified that I would even think to greet a man outside, wearing slacks, and she screamed at me. My mother was an artist in her heart, but the other side of being an artist is often a feeling of social displacement, and this description fit my mother.

Letty’s husband, Ray, who came to the house with a dozen roses, served in the Pacific Theater of Operations, Battle of Okinawa, on the attack cargo ship Artemis Class USS Lacerta (AKA-29), as a boat Commander. He turned 90 in January, 2013. This Friday, his son and grandson will accompany him on a visit to Pearl Harbor, and the Pearl Harbor museum.

Ray and Letty, who tell their story, are my parents. This essay is part of a series. Links to some other essays:

A Kernel of Wheat

Medicine in a Rural Farming Community in 1920s Missouri

An Off-Topic bald eagle update: The Decorah Eagles chose a nest that is off camera, but Raptor Resource reports that Mom Decorah is sitting on her first egg. They have observed the ‘Decorah Shimmy’ from the ground. Dad Decorah Eagle occasionally visits the Y-Branch that is still on-camera.

Over Easy: Feed Sacks and Roses