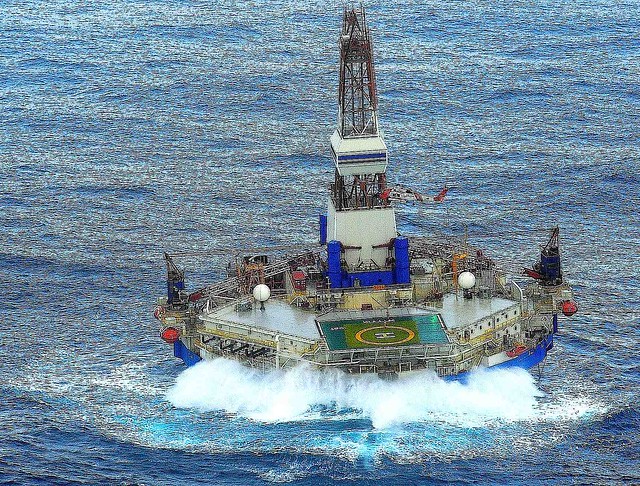 I.  Early Sunday evening (Alaska time) the Shell-leased Arctic drilling rig Kulluk parted the lines from both tugs which had again begun towing the vessel early Sunday.  In heavy seas, with all crew having been evacuated late Saturday, the rig is unmanned.  It is trailing parts of the parted lines.  However, with no hands aboard the rig to man winches, prospects for recovering the rig in worsening seas are both dim and highly dangerous.  The Kulluk has been reported this evening to be only 20 miles to the south of the nearest rocks on Kodiak’s coasts, with winds and waves pushing it toward probable demise.  Lisa Demer, of the  Anchorage Daily News, reports it in a slightly different position:

With no towlines securing it in place, the crew-less Kulluk is drifting about 20 miles south of Sitkinak Island, part of the Trinity Islands, south of Kodiak. Smith said early Sunday evening that he had not yet been briefed on how many hours it would take the Kulluk to reach shore if it continues adrift. A number of variables, including currents and wind speed, would affect when and where it hit, if it came to that, he noted. He said he would provide the information when he gets it.

The superstructure is massive, adding a lot of sail to the wind’s effect.

Earlier today, I telephonically attended a hastily convened press conference that was held in Anchorage’s Frontier Building.  Asking questions at the presser were Lisa Demer from the Anchorage Daily News, and Rachel D’Oro, from the Associated Press.  Both had just filed stories on the press event when the news of further disaster became known, and both have updated their stories within the past hour.

An unmanned mobile oil drilling rig owned by Royal Dutch Shell is adrift — again — south of Kodiak Island after it lost towlines Sunday afternoon from two vessels trying to hold it in place against what have been pummeling winds and high seas, according to incident management leaders.

A team of 250 people from the Coast Guard, the state of Alaska, Royal Dutch Shell, and one of its contractors was hunkered down Sunday, mainly in Midtown Anchorage’s Frontier Building, trying to resolve the ongoing crisis with the Shell-owned drilling rig, the Kulluk.

Before the latest turn for the worse, representatives of the Coast Guard, Shell and the state Department of Environmental Conservation told reporters in a briefing early Sunday afternoon that the situation was critical, but under control.

Then tow lines from the Aiviq and a second support vessel, the Nanuq “separated,” the joint command team said in a statement sent out at about 4:30 p.m. The setback happened sometime after 1 p.m., just as commanders were briefing news media on what appeared at that point to be a successful response after a series of failures. They didn’t yet know the towlines had broken free, said Shell spokesman Curtis Smith, who is part of the unified incident command team.

Demer also noted the somewhat forced optimism I described in my comments posted at firedoglake during the conference.

[Please do not use Associated Press sources on MyFDL. -MyFDL Editor]

II.  Shell and its contractors deserve no praise whatsoever.  I’ve been following the deployments, misuse, problems, fiascos and clusterfucks of the vessels of this operation since July.  If there is but one clear message Shell has sent this year regarding its ability to safely drill off Alaska’s Arctic Coast, it is this – We are a major disaster waiting to happen!

The incident team also must find a safe harbor for the Aiviq, as well as the Kulluk, to undergo inspections and possible repairs before heading south to Everett, Wash., where the Kulluk had been headed for off-season maintenance before the troubles began.

Shell has had a difficult experience as it tries to drill offshore in the Alaska Arctic. It couldn’t drill to oil-rich zones because its novel oil spill containment dome was damaged during testing. Its other drilling rig, a converted log carrier called the Noble Discoverer, recently was cited by the Coast Guard for problems with safety and pollution discharge equipment. Mehler ordered it held in Seward while the most serious issues were addressed. While the ship now is free to leave for Seattle, it remains docked in Seward because it is waiting for escort vessels now working on the Kulluk situation, Smith said.

The other main element of Shell’s hapless Arctic drilling fleet that has made a lot of news in 2012 is the icebreaking barge Arctic Challenger, which didn’t even make it to Northern waters this season because of the disastrous testing failure of its capping dome unit in Puget Sound, Washington in early September, on a perfectly calm, sunny, waveless day.  It is beginning to look like a good thing that the Arctic Challenger didn’t make it up to Alaska, adding a third vessel to Shell’s already over-stretched capabilities for safe movement in risky waters.

When you add this whole package of failure after failure up, it equals incompetence at best, criminally negligent planning and engineering lapses at worst.

I’ll try to keep you updated here.  Not hoping for the Kulluk ending up in the rocks, but I am hoping that this incident wakes up a lot of people.  The only elected official to hold a hearing on Shell’s lapses yet has been Alaska U.S. Senator Mark Begich.  My usual contact with Mark’s office is in the hospital after multiple bypass surgery (praying for you, Mary!), so I’ll find out elsewhere if he is as outraged as we all should be about this serial malfeasance from Shell and its agents.

Update – Monday 9:30 am Alaska Time:  The Aiviq and Alert managed to grab on to the broken lines just after midnight Alaska Time:

Anchorage, Alaska – The Kulluk drilling vessel is under tow by the Aiviq and tug Alert. All three vessels are currently located about 19 miles southeast of Kodiak Island.

At approximately 12:45 a.m., Monday, Dec. 31, the Alert was able to secure the 400-foot line that was previously the tow line used by the Aiviq. The Alert successfully added tension to the line to test its ability to hold.

Later in the morning, the Aiviq also restored its connection to the Kulluk.

Ensuring the safety of personnel and protecting the area’s environment continue to be of the utmost importance.

Difficult weather conditions are anticipated to continue over the next several days. Unified Command is evaluating all potential options to further secure the vessel until the weather clears.

from KTUU TV in Anchorage:

Crews have reestablished tow lines for an unmanned Shell drill unit and said Monday afternoon that it will tow it Port Hobron on the southeast side of Kodiak Island.

The marine weather forecast for tonight for waters south of Kodiak Island call for 30-foot seas and winds of 55 knots or more, which will be as bad as the Kulluk has experienced.

The Kulluk has again broken free.  This time it is four miles from the rocky Kodiak Island coast.  I’ve posted a new entry.  I suspect there will be updates through tonight.

This is looking very bad.

And somewhere a FoxNews talking head is screaming