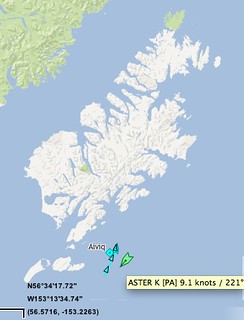 On Thursday, Shell Oil Alaska announced its unpowered drilling rig Kulluk, being towed south from Dutch Harbor to Puget Sound, was in distress, due to complete engine failures on its towing vessel, the MV Aiviq:

The Coast Guard prepared Saturday to evacuate an 18-member crew of a Shell drill ship that was stalled in rough Gulf of Alaska waters, south of Kodiak Island.

The Coast Guard requested that the crew evacuate the Kulluk for safety reasons. The guard said it would have no more details until the evacuation was completed.

The Royal Dutch Shell PLC drill ship was being towed Thursday from Dutch Harbor in the Aleutian Islands to Seattle when problems arose. By Friday, the ship was stalled in the Gulf with a towing vessel whose engines had failed. A relief tug was sent out on 20-foot waves and winds of 40 mph to rescue the ships.

The Kulluk has no propulsion system. The 360-foot Aiviq was towing the drill ship when the Aiviq reported multiple engine failures. The Aiviq crew was able to restart one engine, and with generators had enough power to maintain its position. Two vessels under contract to Shell left Seward when the trouble began — the tug Guardsman and The Nanuq, Shell’s principal oil spill response vessel.

This morning, Shell released the following:

The Shell-contracted response vessel, the Nanuq, arrived on scene at 6:30 a.m. and is assessing the situation to safely conduct a tow with the Kulluk.

Essential equipment parts were delivered to the Aiviq by two Coast Guard Air Station Kodiak-based MH-60 Jayhawk helicopter crews Saturday morning. Repairs are commencing aboard the Aiviq, and a second engine has been brought online.

Precautionary evacuation efforts are being evaluated to remove all non-essential personnel from the Kulluk.

“Our main priority remains the safety of all crews involved in this situation,” said Capt. Paul Mehler III, commander, Coast Guard Sector Anchorage. “To help ensure safety of all involved, we have directed multiple Coast Guard assets to the area, including the Coast Guard Cutter Hickory, our Kodiak based HC-130s and Jayhawk helicopter aircrews.”

The Hickory is scheduled to arrive in the area Saturday afternoon.

The marine weather forecast for the waters in which this is happening is not promising:

COASTAL WATERS FORECAST FOR THE NORTHERN GULF OF ALASKA COAST UP TO 100 NM OUT INCLUDING KODIAK ISLAND AND COOK INLET. WIND FORECASTS REFLECT THE PREDOMINANT SPEED AND DIRECTION EXPECTED. SEA FORECASTS REPRESENT AN AVERAGE OF THE HIGHEST ONE-THIRD OF THE COMBINED WIND WAVE AND SWELL HEIGHT.
Synopsis…A WEATHER FRONT OVER THE NORTH GULF COAST WILL DISSIPATE SAT MORNING. A PACIFIC LOW WILL STRENGTHEN TO 954 MB 320 NM SOUTH OF KODIAK CITY SAT EVENING AND WEAKEN TO 961 MB 70 NM NORTHEAST OF CHIGNIK SUN MORNING BEFORE MOVING INLAND ACROSS SOUTHWEST ALASKA.

Shell’s 2012 Arctic drilling season has been one  clusterfuck after another:

The drilling rig Noble Discoverer went aground in Dutch Harbor in July.

Ice drove the exploratory drilling fleet out of place for two weeks in September. 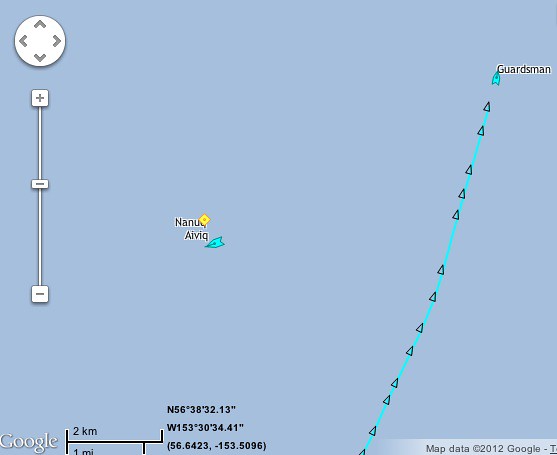 In 1982, I was on a tug – the Miriam de Felice – in almost the exact same place as this is happening, when we lost one of our two engines, and the stress on the remaining one caused it to start breaking down too.  We were in a storm a lot less harsh than this one, and barely made it to port for repairs.  I predict the Alviq will also be repaired, and the Noble Discoverer brought into Kodiak or Seward until the tug is fixed enough to continue on southward.