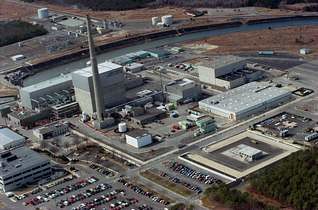 According to the SimplyInfo research team, the Nuclear Regulatory Agency and Exelon are not answering their questions about how the spent fuel pools at the oldest working commercial nuclear reactor in the United States are currently being cooled, while working under a state of emergency, and with the regular cooling water intakes completely flooded:

Oyster Creek nuclear plant has been under alert for over 14 hours now with little for details on what is going on at the plant. The NRC reported via email in the last hour that Oyster Creek remains under alert due to high water at the intakes.

“At Oyster Creek, the Alert was declared at approximately 8:45 p.m. An alert is the second-lowest level of emergency classification used by the NRC. The Alert was preceded by an “Unusual Event” at about 7 p.m. when the water level first reached a minimum high water level  criteria. The water level rose due to a combination of a rising tide, wind direction and storm surge. While the water level has dropped since peaking earlier today, the Alert will not be exited until the level is below the specific criteria for the intake structure, which is where water from an intake canal is pumped into the plant for cooling purposes.  Oyster Creek was shut down for a refueling and maintenance outage prior to the storm and the reactor remains out of service ‘ – via NRC email

They do have the ability to replace water that evaporates or boils off with water on site and as Exelon told Reuters “fire hoses” as a last resort to at least keep water on the fuel.

Gregg Levine, firedoglake‘s resident nuclear plant expert, has been trying to keep up with this while experiencing his own power outages and shortages, as he lives in the area swept by Hurricane Sandy:

Jesus. I worked half the night on battery power and a mifi card, and the stuff I wrote (post upcoming) already needs an update.

OK, new post is already in need of updates, but it is hard to stay up to speed with limited electronics. I post and will revisit, technology permitting.

Like me and others, Gregg is not impressed with fire hoses to cool these huge spent fuel pools:

If hoses desperately pouring water on endangered spent fuel pools remind you of Fukushima, it should. Oyster Creek is the same model of GE boiling water reactor that failed so catastrophically in Japan.

The NRC press release (PDF) made a point–echoed in most traditional media reports–of noting that Oyster Creek’s reactor was shut down, as if to indicate that this made the situation less urgent. While not having to scram a hot reactor is usually a plus, this fact does little to lessen the potential problem here. As nuclear engineer Arnie Gundersen told Democracy Now! before the Alert was declared:

[Oyster Creek is] in a refueling outage. That means that all the nuclear fuel is not in the nuclear reactor, but it’s over in the spent fuel pool. And in that condition, there’s no backup power for the spent fuel pools. So, if Oyster Creek were to lose its offsite power—and, frankly, that’s really likely—there would be no way cool that nuclear fuel that’s in the fuel pool until they get the power reestablished. Nuclear fuel pools don’t have to be cooled by diesels per the old Nuclear Regulatory Commission regulations.

A site blackout (SBO) or a loss of coolant issue at Oyster Creek puts all of the nuclear fuel and high-level radioactive waste at risk. The plant being offline does not change that, though it does, in this case, increase the risk of an SBO.

The amount of fuel in Oyster Creek’s spent fuel pools is related by the NRC in terms of millions of curies, rather than in dead weight.  At about 112 million curies of radioactive material, it is 43rd of the list of such waste storage sites at commercial reactors in the USA, with the reactors at Millstone Connecticut having about 420 million curies.

The American Nuclear Society, at their blog, the ANS Nuclear Cafe, has downplayed the danger posed by the current emergency at Oyster Creek:

Exelon has re-confirmed to the American Nuclear Society by telephone and e-mail that Oyster Creek does in fact have numerous, redundant cooling systems for the spent fuel including closed-loop and service water systems. Exelon tells us that if required, two locomotive–sized diesel engines are ready and standing by should offsite power be lost, to provide power to those two backup systems during the refueling outage should an extended LOOP scenario arise.

Exelon has, as expected by many, declared an Unusual Event at Oyster Creek due to the rising water levels. Below are excerpts from Exelon’s press release on this declaration

No mention of fire hoses in the ANS blog entry.

Good work by Gregg Levine on this.  Frankly, I’d trust him before the pro-industry American Nuclear Society.

Any disaster of the week.

With these reactors aging rapidly, their recertification process overly politicized, and climate change creating more and more situations annually that involve severe coastal and river flooding and inundations, we can expect more need for fire hoses at N reactors in our future.