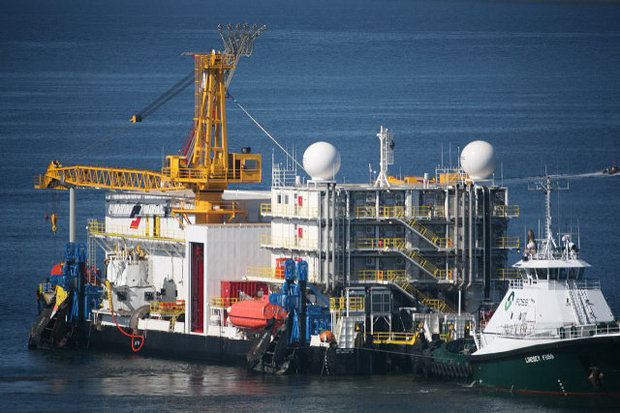 Early Monday morning, Shell Oil announced that its plan of drilling all the way into oil, inside the crust of the bottom of the Arctic Ocean off the shores of Alaska, were crushed.  Their own technology, the vaunted containment dome, said to incorporate all the lessons learned from capping the Deepwater Horizon spill, was severely damaged in perfect late summer weather, while being tested on Puget Sound:

Shell is giving up for the year on drilling for oil in Arctic waters off Alaska after another setback to its troubled oil spill containment barge.

The company announced the decision Monday after testing of the Arctic Challenger, the oil spill containment barge the company has been unable to get ready and certified to support its Arctic Alaska exploration. Shell said that, while it will abandon its effort to drill into oil-bearing zones this year, it will drill “top holes” to get ready for next year.

“During a final test, the containment dome aboard the Arctic Challenger barge was damaged. It is clear that some days will be required to repair and fully assess dome readiness,” the company said in a written statement.

Environmental activists from Greenpeace, and being represented by Public Employees for Environmental Responsibility, have been pushing for the U.S. Coast Guard and U.S. Bureau of Safety and Environmental Enforcement to conduct more rigorous tests on the equipment Shell has vaunted as being the best in the world for winter conditions in the Arctic.  That the key spill containment feature failed in lake-like conditions near Bellingham Bay on Puget Sound is an indicator that the concerns of activists such as ex-Prof. Rick Steiner (hounded from his post at the University of Alaska by the Bush and Obama administrations, at the behest of Shell), and Subhankar Banerjee (who was a guest Sunday at firedoglake’s Book Salon) have legitimacy, and that Shell may be setting us up for as bad a record in the Arctic as they have on the Niger Delta.

I’ve been concerned about the package represented by the Arctic Challenger since I found out in late July that Shell was refitting the barge I had worked exactly thirty years ago into a role I knew it was not suited for:

Although the Arctic Challenger was not needed as an icebreaker in 1982, it had been tried in that role earlier, and was found to be poorly designed.  It didn’t draw a lot of water – 4.1 feet empty – so, after having been broken by the bows,  ice would creep along underneath the hull and ultimately foul the props and rudders of the propelling tugs.  Not good when you’re 3,000 miles from Seattle.

Crew members of towing tugs had been injured over the five years since the barge’s completion, and it was not considered to be a “good luck” barge in fleet scuttlebutt. It never really found a niche after the Sealifts were over.  It languished, being shuttled from Seattle to the Gulf of Mexico to Coos Bay, Oregon, where it stayed for a long time.

On August 8th, I attempted to take a close look at the work being done in Bellingham Bay on the Arctic Challenger.  I was thwarted and followed by Shell rent-a-cops out of town:

I’m on my way back from Bellingham.  I visited the Port of Bellingham Dock this morning, where the barge Arctic Challenger is being modified by contractors for Shell Oil, to be used as their oil spill containment vessel for offshore drilling operations in the Beaufort and Chukchi Seas.

I was told the stern notch is being decked over and compartmentalized permanently.  It will never be pushed again as an icebreaker. Instead, he stated, an icebreaking tug, similar to the Swedish tug Tor Viking II, will be assigned to the Arctic Challenger from the time it leaves Puget Sound until its duties in the Arctic are over.  He stated that, summer or winter, when the vessel is deployed in the drilling areas, it will not be moored or anchored, but will be moving or drifting.

I thanked him for the best information anyone has yet given me, and requested a tour of the project.  He flatly told me “No,” and I was not allowed to take any photographs of the vessel.  He assured me that Shell Oil will be contacting me soon with more information.

The ambience of the work place there reminded me very much of projects in the past where I have worked that are seriously behind schedule and nervous of potential outcomes.

I was followed by private police until I left Bellingham.

Bad luck barge? A project long nervous about potential outcomes?  Incapable of passing dumbed down tests in flat calm weather?  Is this what we will have next year, after Shell cobbles together something that can somehow get certified as adequate?

Look at the image at the top, of the barge, being towed into Bellingham Bay.  It is supposed to have a crew of scores of people, when deployed.  Would you like to be on that thing in an 80-knot blow anywhere, let alone the Arctic Ocean?

Meanwhile, Shell hopes to continue drilling into the crust, to a distance short of where the oil is supposed to be:

Shell is required to finish any drilling operations in advance of the arrival of sea ice that could pose a problem for containing spills. The company had hoped for an extension of its Sept. 24 deadline for drilling in the Chukchi Sea. But Interior Secretary Ken Salazar said he wouldn’t consider the request until the spill containment barge was ready and certified.

Shell is now abandoning for this year the effort to drill into oil-bearing zones. But the company plans to drill as many “top holes” as possible this drilling season in hopes of making progress toward next year.

“The top portion of the wells drilled in the days and weeks ahead will be safely capped and temporarily abandoned this year, in accordance with regulatory requirements,” the company said in its written statement.

Shell has had problems with even such preliminary drilling.

The company last week had to halt the effort the day after it began when sea ice started moving toward the drill ship.

Shell said the drill ship, the Noble Discoverer, is expected to resume its position in the Chukchi Sea and start work again in the coming days. Shell said it also plans to start operations in the Beaufort Sea soon following the fall Inupiat whaling season.

image:  The Arctic Challenger, being towed to its berth in Bellingham Bay, by a Tug (possibly the Garth Foss), after the failure of its spill containment system in a test on Puget Sound. Photo by Todd Guiton, published by the Bellingham Herald

So, should President Obama be concerned about black voters staying home on election day?