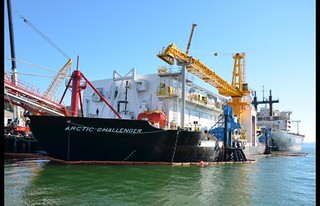 I.  As the pressure mounts on hapless contractor Superior Energy Services to finish work on Shell Oil’s forlorn hope to achieve a 2012 Arctic oil drilling season, the barge and renovation project have been spilling oil and hydraulic fluids into Bellingham Bay, where the work is being done:

The containment vessel designed to capture oil in the event of a spill during exploratory drilling off the coast of Alaska has itself been responsible for four minor illegal fluid discharges during the last three weeks, the Coast Guard confirmed Monday.

The discharges all involved hydraulic fluid and were generally limited to about a quart each time, all of which was contained and cleaned up. The fine was just $250. But the discharges signal Shell Exploration’s continuing problems with the vessel, the Arctic Challenger, whose trouble-plagued retrofit in Bellingham, Wash., has delayed the launch of the first major offshore oil drilling in the U.S. Arctic in 20 years.

BELLINGHAM – The Washington Department of Ecology (Ecology) is requiring improved protection for Bellingham Bay during work on the oil-containment barge Arctic Challenger.

Superior Energy Services is building an oil-containment system on a barge at the Bellingham Shipping Terminal, 629 Cornwall Ave. Shell will use the barge at offshore drilling sites in the Alaskan Arctic. In the event of an oil spill, the barge is designed to lower a large dome over the leaking oil, capture it, and pump it onto the barge.

Since July 24, 2012, the construction project has resulted in three hydraulic oil spills, about a quart each, from the barge, and a diesel fuel spill, estimated at less than 20 gallons, from a work boat to Whatcom Waterway.

Superior has 24 hours from the time it receives Ecology’s notice to employ the corrective measures, and seven days to provide a report to Ecology that describes how the company is prepared to respond to spills.

Ecology continues to investigate the spills and is considering additional enforcement actions.

In addition to the notice of correction and potential enforcement, Ecology is requiring lead construction contractor Greenberry Industrial to conduct its operation as if it was covered under an industrial stormwater discharge permit. The project was scheduled to be completed in July. Because it can take up to two months to obtain permit coverage, Ecology used its discretion to allow Superior to continue working as long as it meets permit requirements.

“Small spills lead to bigger spills,” said Dale Jensen, manager of Ecology’s Spill Prevention, Preparedness and Response program. “Our hope is that the companies that are gearing up for oil work in Alaska and spilling here will learn from our work with them and ensure spills of all sizes are prevented everywhere they work.” [Emphases added]

II. Since my visit last week to the Bellingham dock where the Arctic Challenger is being modified, from which I was followed by two private security cars, until I left Bellingham, two articles detailing more about Shell’s 2012 drilling plans have been published.

First, I wrote here on Tuesday August 14th about the current status of the drilling support fleet, where they are and what they are or are not doing.

Second, Alex De Marban has written a very detailed article for The Alaska Dispatch on the history of the Arctic Challenger.  De Marban cites my work, without providing any links:

The media has zeroed in on the slow progress. Everyone from Alaska blogger Phil Munger, who said he was on a tug that once helped tow the Challenger, to the nation’s largest papers are asking questions. The Los Angeles Times recently zeroed in on a minor fine stemming from small discharges into the water during the vessel’s retrofit at the shipyard in Bellingham.

“It’s not a project we can rush, and since it’s a first of its kind vessel, there are always going to be delays related to construction,” Smith said in an email to Alaska Dispatch. “Unfortunately, these delays are impacting our drilling season. But make no mistake this vessel is rock solid and capable.”

In an email, Smith refused to answer why Shell chose this particular vessel to play such a pivotal role. But a review of the Arctic Challenger reveals a colorful history, from its glory days in Alaska’s Arctic to idle times at dock, with birds calling the barge home.

De Marban goes on to follow the Arctic Challenger, from design, to its use in the Arctic Ocean and Bering Sea as an icebreaker, to its Cinderella years of neglect, in Long Beach, California, and Coos Bay, Oregon, to its recent resurrection as the key piece of equipment in Shell’s plans to drill for oil off of the Alaskan coast.  De Marban cites Crowley Maritime’s Bruce Harland, who appears to be somewhat familiar with the Arctic Challenger‘s Crowley work history, as praising the vessel’s utility:

Harland, the Anchorage-based vice president with Crowley, said he didn’t know what modifications Superior is making to the vessel, but it had a very capable life as an icebreaker when his company operated it.

“It’s just been a dependable piece of equipment,” he said.

As far as Harland knows, the ship’s return to the Arctic as part of Shell’s oil drilling operations would be its first duty since the late 1990s. And he expects the Challenger’s reliability to continue with its second life in the Arctic.

Harland’s opinion is at odds with my remembrance of the vessel’s reputation in the early 1980s, based on my having worked with several crewmen who had worked on tugs pushing the Arctic Challenger through the ice in the late 1970s.  However, the AC has been modified so that it can no longer be pushed through the ice.  It will be towed by an ice breaking tug.

Since I wrote here about the rapidly declining probability of Shell being able to even have a 2012 drilling season in the Beaufort or Chukchi Seas, nobody has taken a chance on predicting there will be one this year.  It looks to me like Shell will have a good ten more months to work the wrinkles out of their systems, and – hopefully – spill no more oil from their oil spill prevention and cleanup barge.

De Marban’s article links to a video animation of Superior Energy Service’s contemplated use of their Arctic Containment device.  Here is the link – it is the second video down, titled Marine Technical Services’ Arctic Containment Animation.

Compare that to Shell’s 2010 concept, which was pre-BP Gulf blowout:

Paul Ryan Bashes President on Chinese Currency Manipulation, But Ryan Opposed the Bill That Would Have Stopped It