Shell Oil has already reduced the number of possible exploratory wells to be drilled this season in the Arctic’s Beaufort and Chukchi Seas from eight to three, or possibly two – one in the Beaufort and one in the Chukchi.  Although they have deployed two drilling rigs into the Arctic this season, the drilling itself cannot start until the oil spill containment equipment on the barge Arctic Challenger is on site.

As of Monday, here is a short version of the current status of the Arctic Challenger‘s re-design and testing, in and near Bellingham, Washington:

Coast Guard officials say they’re waiting for Shell to finish nearly 200 items on the barge before they can be inspected. Those include things like electrical and firefighting equipment.

Another 200 items remain to be documented before the Coast Guard will declare the barge seaworthy. Then, after another federal agency tests the Challenger’s oil-vacuuming system, the barge can be towed to the Arctic. Shell says that journey will take two weeks or more.

Shell had planned to begin drilling in July. But delays in construction of the barge have forced the world’s largest oil company to cut back its Arctic drilling plans. Shell only has permission to drill in the brief Arctic summer.

Bowhead whaling season begins in late August. Given the five-week time frame described in the article quoted above, the barge cannot arrive on site until at least the first or second week of September.

Under agreements with Alaska Native bowhead whaling skippers and their organizations, Shell may drill in the Chukchi after the season begins, because the proposed drill holes are far from where the whales are usually hunted.  This is not the case in the Beaufort.  If only one whaling captain objects to Shell’s 2012 Beaufort plans, they will have to suspend or not start drilling. 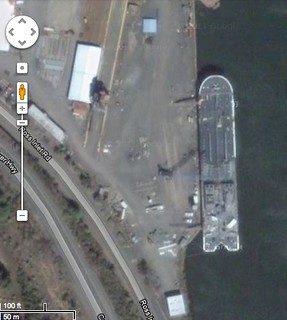 You can plainly see the stern notch, which was designed for a non-icebreaking tugboat to push the Arctic Challenger through ice.

Here is the picture, released by Shell yesterday.  It clearly shows plating over the stern notch: 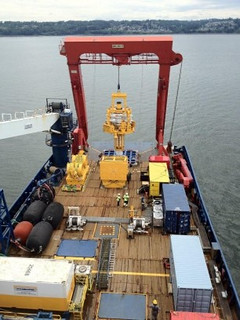 If the plating is removable (it does not appear to be handily removable), then the barge can be pushed as originally designed.  However, if the plating is the top part of a new stern compartment, the vessel cannot be pushed, and would need an icebreaking tug to pull it into position in sea ice conditions.

According to U.S. Coast Guard Commander Christopher O’Neil, the USCG spokesperson on the project oversight, Shell has no known plans to deploy an icebreaking tug to stay with the Challenger permanently, or even during the majority of the year, when the barge will be surrounded by ice.

I’m going to Bellingham tomorrow to try to find out for sure what the nature of the stern plating is. Hopefully, the USCG won’t be hoodwinked by Shell into accepting this strange setup.

Hopefully, there will be no 2012 Arctic drilling off Alaska by Shell.

It might be a good time to buy shorted Shell Oil stock.

Update – Wednesday 10:00 am PDT:  I’m on my way back from Bellingham.  I visited the Port of Bellingham Dock this morning, where the barge Arctic Challenger is being modified by contractors for Shell Oil, to be used as their oil spill containment vessel for offshore drilling operations in the Beaufort and Chukchi Seas.

I was told the stern notch is being decked over and compartmentalized permanently.  It will never be pushed again as an icebreaker. Instead, he stated, an icebreaking tug, similar to the Swedish tug Tor Viking II, will be assigned to the Arctic Challenger from the time it leaves Puget Sound until its duties in the Arctic are over.  He stated that, summer or winter, when the vessel is deployed in the drilling areas, it will not be moored or anchored, but will be moving or drifting.

I thanked him for the best information anyone has yet given me, and requested a tour of the project.  He flatly told me “No,” and I was not allowed to take any photographs of the vessel.  He assured me that Shell Oil will be contacting me soon with more information.

The ambience of the work place there reminded me very much of projects in the past where I have worked that are seriously behind schedule and nervous of potential outcomes.

I was followed by private police until I left Bellingham.

Obama Ahead by Three in North Carolina