My Letter to Sens. Murkowski and Begich Requesting Espionage Investigation of Benjamin Netanyahu 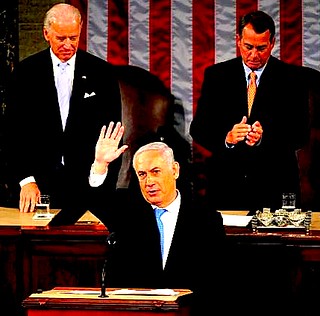 (Israeli spy Netanyahu addressing a joint session of the U.S. Congress in 2010)

I delivered this letter today to the local offices for Sen. Lisa Murkowski and Sen. Mark Begich:

A number of sources have been reporting since the 4th of July that Israeli Prime Minister Benjamin Netanyahu has been implicated in participation in a ring which stole nuclear technology from the United States over a period of years, dating from 1972, with the formation of front companies in Israel and the United States designed to illegally obtain and receive items for the former country’s nuclear armament programs.

Aspects of these illegal and controversial espionage activities have been known for years, and were investigated by the Federal Bureau of Investigation between 1985 and 2002. Documents that are part of that investigation came to light on June 27th, 2012. Even with many redactions, they clearly implicate the current Prime Minister of Israel with participation in an extensive criminal conspiracy that did serious damage to American interests worldwide.

The first American story on this was written on July 4, by Grant F. Smith, Director of the Institute for Research, Middle Eastern Policy in Washington DC. In part, Mr. Smith writes:

On June 27, 2012, the FBI partially declassified and released seven additional pages [.pdf] from a 1985–2002 investigation into how a network of front companies connected to the Israeli Ministry of Defense illegally smuggled nuclear triggers out of the U.S.* The newly released FBI files detail how Richard Kelly Smyth — who was convicted of running a U.S. front company — met with Benjamin Netanyahu in Israel during the smuggling operation. At that time, Netanyahu worked at the Israeli node of the smuggling network, Heli Trading Company. Netanyahu, who currently serves as Israel’s prime minister, recently issued a gag order that the smuggling network’s unindicted ringleader refrain from discussing “Project Pinto.”

The FBI information release states in part, in reference to Prime Minister Netanyahu:

FBI agents interviewed Smyth on April 16-17, 2002, at the U.S. attorney’s office in Los Angeles. The secret interview report details how during a trip to Israel Smyth was “spotted” by Milchan, who claimed he worked as an exclusive purchasing agent for the Ministry of Defense. Smyth was introduced around to high military officials including then-general Ariel Sharon. Smyth was also put in contact with Benjamin Netanyahu, who worked at Heli Trading Company. According to the FBI report, “Smyth and [Netanyahu] would meet in restaurants in Tel Aviv and in [Netanyahu’s] home and/or business. It was not uncommon for [Netanyahu] to ask Smyth for unclassified material.”

I have attached the relevant part of the FBI report below: 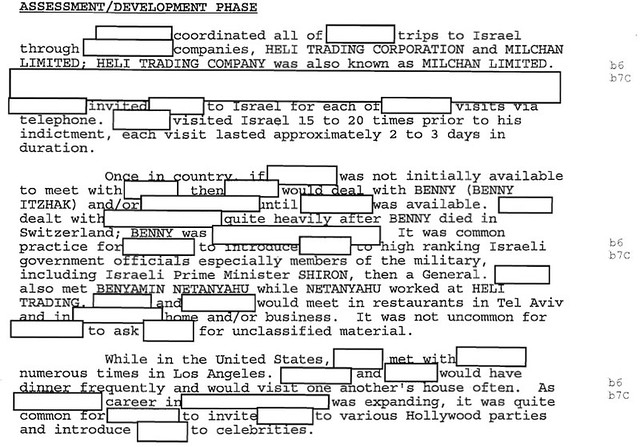 My concern regarding this serious matter is as follows:

1. Sen. Begich, as a member of Senate Armed Services Subcommittee on Strategic Forces; and Sen. Murkowski, as a member of the Committee on Appropriations Subcommittee on Homeland Security; you both have direct responsibilities of oversight on issues concerning national security. As part of those duties I request you find out more about what damage Mr. Netanyahu may have done to our national interests in his capacity as a member of an immensely damaging foreign espionage ring.

2. Should information you find reflect actual damage to our interests, I would like to request that you seek an indictment against Mr. Netanyahu through the U.S. Department of Justice, to be activated the day he leaves office.

3. Until an investigation has been made and concluded, I would like to request that you investigate the possibility that Prime Minister Netanyahu be declared a Persona non Grata within the borders of the United States and its possessions, and that no information of strategic value to our national interests be shared with him or with any member of his cabinet.

My Letter to Sens. Murkowski and Begich Requesting Espionage Investigation of Benjamin Netanyahu