Israeli Interior Minister: “This Country Belongs to Us – The White Man!”

EdwardTeller
0 0
Israeli Interior Minister: “This Country Belongs to Us – The White Man!” EdwardTeller 2012-06-03 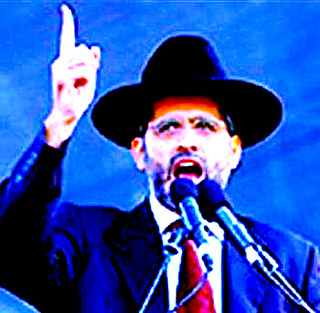 Imagine if David Duke were U.S. Attorney General, or the head of Immigration and Customs Enforcement (ICE).  Imagine if ICE head Duke proclaimed loudly, at a rally produced by Sheriff Joe Arpaio:

“Mexicans, Asians and Negroes that arrive here do not even believe that this country belongs to us, to the white man!“

Fortunately, neither Duke nor somebody of his ilk is very high up in our government.  In Israel, they aren’t so fortunate.  Here’s that country’s real Minister of Internal Affairs, Eli Yishai, this morning:

“Muslims that arrive here do not even believe that this country belongs to us, to the white man.”

That is Yishai’s latest response to the increasingly racist events unfolding in Israel having to do with that country’s disturbingly violent reaction to an influx of migrants from sub-Saharan Africa.

I’m not quite sure what Yishai’s definition of “white man” is.  His parents emigrated to Israel from Tunisia.    His party affiliation has been with Shas since soon after the party’s inception in 1984.  Under the current government, this is the third time Yishai has held the cabinet post of Interior head, the previous terms being from 2001 to 2003.

It is a post unlike any in the United States:

The position is often demanded by avowedly religious or secular parties as it allows them to control religious councils and planning (including the building of settlements), as well as religion and state issues such as civil marriage and immigration (which is affected by the Who is a Jew? debate). In recent years it has been held by Shas, an ultra-orthodox party, as well as Shinui and Yisrael BaAliyah, both secularist.

Who is Yishai pandering to with his white supremacist statement that he surely must have known would be picked up by the Israeli press, possibly outside of the country too?  His quote came out early Sunday in a Haaretz article about a new law that came into effect today, regarding detention of migrants:

A law granting Israeli authorities the power to detain illegal migrants for up to three years came into effect on Sunday, in the wake of widening public controversy over the influx of African migrants who cross into Israel along its border with Egypt.

The law makes illegal migrants and asylum seekers liable to jail, without trial or deportation, if caught staying in Israel for long periods. In addition, anyone helping migrants or providing them with shelter could face prison sentences of between five and 15 years.

The law amended the Prevention of Infiltration Law of 1954, passed to prevent the entry of Palestinians as part of emergency legislation. The law is expanded to address migrant workers or asylum seekers who enter Israel without posing a threat to Israel’s security.

According to the law, migrant workers already here could be jailed for the most minor offense such as spraying graffiti or stealing a bicycle – infractions for which they would not have been detained before.

So far, all migrants who have been caught by the Israel Defense Forces on the Israel-Egypt border have been transferred to the Saharonim detention facility which holds 2,000 spaces.

I wrote here about the current push in Israel for race-based concentration camps back on May 24th.  In that diary, I speculated that Yishai is one of the Israeli politicians playing a role in purposefully fueling the rising violence against people there perceived to be non-white.  Since the time of the Tel Aviv riots last month, Ethiopian Jews, who I doubt Yishai considers “white,” have taken to wearing t-shirts proclaiming their Jewishness.  They’re afraid they will get assaulted by people inflamed by Yishai and his colleagues’ incendiary diatribes.

This new law, and statements of the sort uttered this morning by Minister Yishai clearly reinforce what I wrote back on the 24th:

More than the rantings pushing for a war against Iran, more than the struggle for Palestinian rights, more than the billions upon billions we give away to Israel every year, the almost daily mushrooming of racial hatred by Israelis may be what finally disgusts us out of our stupor.

Back on May 9th, Philip Giraldi, in an essay about a “tipping point” having arrived in Israel in respect to the U.S. population’s generic blind support of Israeli policies in all areas, wrote:

So we have reached the point where the proverbial cat is out of the bag. Everyone, with the possible exception of the U.S. Congress, has become aware that there is something terribly wrong with Israel. In Israel itself, where there is often ferocious debate over the country’s policies, it is time for a reckoning. Does Israel want to become a normal state with correct relationships with its neighbors, including an independent Palestine, or does it want to continue down the road that it is pursuing, which is folly and will lead to ruin? The choice is ultimately Israel’s, but, for the first time, Americans are actually beginning to talk and write freely and openly about the problem.

Giraldi only tangentially addressed the rapid rise of racism in policy, procedure and actions.  To him the tipping point was more about a succession of brilliant books on how Americans react to Israeli policy, by Jimmy Carter, Stephen Walt & John Mearsheimer, and Peter Beinert.

These are indeed important.  However, those of us attempting to get the message across that Israel has fully become the new apartheid South Africa can rest assured that the white supremacist images, quotes and policies coming out of Israel almost daily will explain our message quite fully on their own.

Israeli Interior Minister: “This Country Belongs to Us – The White Man!”