In The Spirit Level book, Wilkinson & Pickett needed a measure of violence and used the number and rate of international homicides. (The United Nations Surveys on Crime Trends and the Operations of Criminal Justice Systems.) They plotted the numbers for homicide against their data on income inequality for individual countries. The chart is here:

The U.S.A. is almost off the chart in the upper right hand corner, and Japan is the lowest in numbers of homicides and is one of the more equal societies, found over over in the lower left hand corner. There is a large body of evidence which shows a clear relationship between inequality as a structural, systemic problem and higher homicide rates.

Who is involved in violence?

The researchers spend quite a bit of time rendering a sketch of “who” is being violent. Within any society it is poor young men from disadvantaged neighborhoods who are most likely to be involved in violence. I need to refer to a chart now which is not available to show to you: On page 132 of The Spirit Level, in Figure 10.1 labelled, Homicides by age and sex of perpetrator. England and Wales compared with Chicago. This is what it shows:  The searing, soaring rise of the frequency trajectory begins in the 10-14 year old males group, peaks in the 20-24 year olds group, then goes into a sustained decline until it reaches the 35-39 year old groups. This same age and sex pattern, which is found in Chicago, is found in the same age group patterns for males in England, and Wales. However, the case for income inequality as a potent factor is made when the authors show that the rate of homicides in Chicago is 30 times the rate of homicides in England & Wales. At the peak age of 20-24 years of age, males in Chicago commit between 800 and 900 homicides per million population, whereas same aged males in England & Wales commit 25 to 30 homicides per million population. If you go up to the international chart above, you will now understand why the U.S.A. is high in frequency of homicides  (64 per million) and is the next to highest for income inequality as a country.

Why do the authors believe these crimes are committed?

Violent crimes are almost unknown in some societies. Not all young disadvantaged men and all young men are violent. Citing James Gilligan’s work on violence, the authors lay out a case for interpreting violence as a way to ward off shame and humiliation, replacing it with a feeling of pride. Gilligan’s research about violent crimes uncovered moments of threats to pride (self-esteem) that instigated feelings of humiliation or shame. All of us have experienced being disrespected, shamed or made to look foolish in the eyes of others, but not all of us deal with these feelings through a violent response. Why do young, disadvantaged men respond more frequently with violence? The authors write that these disadvantaged youths have no status symbols to use to attract young women as sexual mates. They write that these youths need status symbols, status experiences more than others do, and do not have the benefit of other status resources to fall back upon. These disadvantaged youth cannot pat themselves on the back and focus on what they do have. Because they have nothing left but ‘pride’ to lose, they command respect and rigidly defend their self-esteem.

What larger societal factors appear to contribute to violence?

Given that unequal countries have higher levels of homicides, the authors turn to factors within the family: life without fathers, child abuse experiences, ridicule from parents who displace their own humiliations onto the child, violent neighborhoods, bullying and peer conflicts. The chart below shows that bullying and peer conflict are correlated with life in unequal countries: 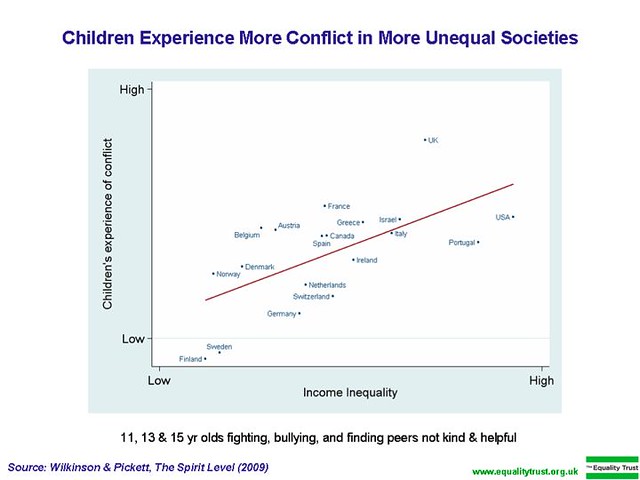 Neighborhoods can become places where disadvantaged youth learn that people are not to be trusted, and that one can be bullied. Neighborhoods where no one trusts each other can be places where people do not help each other, places where you have to command respect or be taken advantage of. In more unequal societies, disadvantaged young males have less social capital to draw upon when faced with a shaming or humiliating experience. In addition, unequal societies are more hierarchical, status is more narrowly defined, and competition for status is more intense. A person who commits violence is often at the very end of their resources, emotionally, socially, economically and psychologically. Then they are disrespected, shamed, bullied, or humiliated when they already feel worthless…….

An alternate path to hopelessness and violence.

I agree with the hopelessness groundwork as the basis for violence. However, I believe that violence is determined more directly by economic unfairness in our society. Just as in the 1950s when Paul Goodman wrote that there was no manly work available for youths,  it seems that we have not provided a “future” for youth today. We have youth unable to find remunerative, adequate, meaningful jobs and unable to pay for college or for debts they have been saddled with from previous college education. If you have been in prison you cannot get a job. If you have been unemployed you cannot get a job. But the worst part is that the wise men have no plan to employ a vast army of betrayed, disappointed and disillusioned youth who cannot move forward in their lives because they have no employment. They cannot find a mate, get married, have children, buy a house, take a vacation, buy a car, NADA. Nothing. From Goodman’s words,

….”our abundant society is at present simply deficient in many of the most elementary objective opportunities and worthwhile goals that would make growing up possible. It is lacking in enough man’s work. It is lacking in honest public speech, and people are not taken seriously. It is lacking in the opportunity to be useful. It thwarts aptitude and creates stupidity. It corrupts ingenuous patriotism. It corrupts the fine arts. It shackles science. It dampens animal ardor. it discourages the religious convictions of Justification and Vocation and it dims the sense that there is a Creation. It has no Honor. It has no Community.” (p.12)

“Positively, the delinquent behavior seems to speak clearly enough.  It asks for what we can’t give, but it is in this direction we must go. It asks for manly opportunities to work, to make a little money, and have self-esteem; to have some space to bang around in, that is not always somebody’s property; to have better schools to open for them horizon’s of interest; to have more and better sex without fear or shame; to share somehow in the symbolic goods (like the cars) that are made so much of; to have a community and a country to be loyal to; to claim attention and have a voice. These are not outlandish demands………” (p.50)

Goodman found that these youth faced a jobless future and therefore rebelled through delinquency, or by joining up with the resigned in the Beat generation. Whereas his generation’s youth faced a workplace and society which demanded complete conformity and loyalty to the ‘organization’, our youth face a jobless workplace which has commodified and depersonalized workers. The results are the same: stultified personhood and no economic future.

In the 1990s there was an improvement in employment and a drop in poverty in the U.S.. Violence which had increased since the 1970s suddenly decreased. Now we are swinging back into poverty again.  As we move into a period of increased frustration and reduced hopes we can anticipate more violence in our society which has become more and more unequal. Inequality rose through the 1980s, peaked in the 1990s and is showing an upturn since 2000. The chart below shows the rising gap between the rich and the poor since 1975: 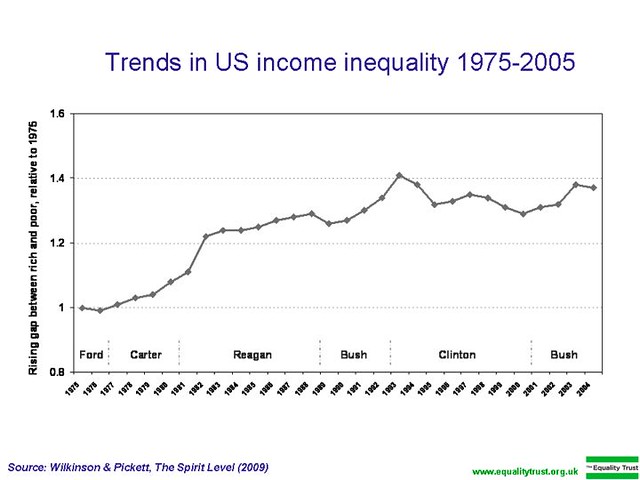 Willful ignorance of income inequality seems to be the state of mind of our political class. In response to the denial of the powerful elites, an entire new social movement has arisen. As if powered by Paul Goodman’s critique of our country to help youth achieve a spirited and skillful adulthood, Occupy has arrived to address the problems which make our society so unfair. But instead of respecting Occupy’s message about the wrongs of our society, this peaceful, healing social movement has been disrespected and suppressed. In Chicago, and before in L.A. and in NYC, militarized police launched attacks on peaceful demonstrators. You can hear the bones of our democracy snapping and breaking. There is no honor in dismissing our youth’s hope, and Occupy’s hope. Let this post on income inequality and violence, replete with charts from the writers of The Spirit Level, stand as a warning beacon: Income inequality (such as, no jobs for youth) and violence are strongly related to each other.  Youth today will not be denied, nor should they be, as this is their world now.

N.B.  The charts above were used with permission from the EqualityTrust.org.uk site. The site is free and has many resources which can be directly accessed; original research papers, brief videos by the authors, and organized evidence for each factor related to income inequality.