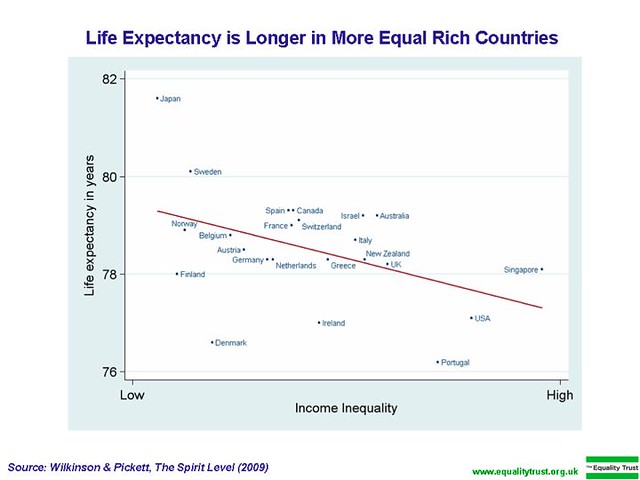 There is more infant mortality in more unequal countries. 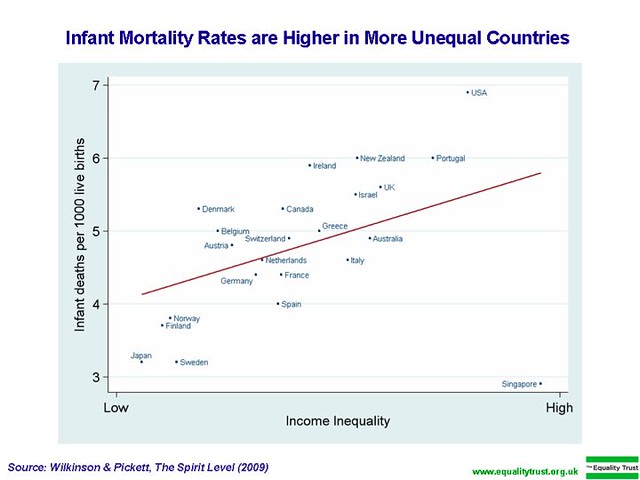 The same relationships hold for inequality in States within the U.S. as well. Where inequality is higher, States have shorter average life expectancies and higher numbers of infant deaths.

On page 13 of The Spirit Level book there is a chart of death rates which are closely associated with income. On the vertical Y axis are numbers of deaths per 10,000 people; on the X axis are Average Income of U.S. zip codes from Poor to Rich. The range of age-adjusted mortality is from “above 90 deaths/10,000 in the Poorest Zip Code” sloping downwards and smoothly to “slightly above 50 deaths/10,000 in the Richest Zip Code”. Those in the middle of the sloping curve have an age-adjusted mortality of 65-68 deaths/10,000. In this chart, there is no spike for the poorest and no dropping trough in the numbers of the rich; instead, mortality follows a smooth curve, worse for the poorest and best for the rich but following a smooth trajectory across all income gradients.

Using a Social Gradient based upon Income, Your place in the Hierarchy Determines Your Health.

Most of us have grown up under the illusion that our life expectancy depends upon our personal choices; whether we smoke, exercise, eat the right foods and control our alcohol intake. To a certain extent these do impact on our health; but to a greater extent our health depends upon where we stand relative to others. Those above us on the income and status scale have better health and those below us have worse health.

Here’s how they figured this out. First, they divided society into income groups and compared each groups frequency of illness, disability and deaths. Discovering in 1992, that these divisions made a huge difference, they looked for a larger sample. They found this sample in the Whitehall studies of British civil servants which was set up to investigate the causes of heart disease and other chronic illnesses. The beauty of the Whitehall samples was that they all had access to the same healthcare system: the British universal health care system! In Whitehall I, only males were tracked. In Whitehall II (still ongoing) males and females are tracked.

In the first study, researchers were astounded to find that the low status jobs were the ones with the highest death rate, three times higher than the men in the highest grade jobs. In the second study, researchers found that low job status not only predicted a higher rate of heart disease, but also higher rates of other chronic diseases such as cancers, lung diseases, gastrointestinal disease, depression, suicide, sickness absences from work, back pain and self-reported health.

Differences in life-style (those pesky choices like to smoke or not) accounted for only a third of the increased risk of deaths from heart disease. Absolute poverty and unemployment could not be blamed for these outcomes: they were all working! Of all of the factors identified with worker’s low status and mortality in these studies, job stress and people’s sense of control over their work seemed to make the most difference. For a review of more of the social determinants of health, there is this online pdf from the World Health Organization.

We are not likely to feel good if our job is stressful, if we feel like we have no control over our job or our lot in life. That low psychological undertow is going to contribute to our poor health. Relationships matter too. Suicide rates are lower where people feel connected to others and a part of their community. Friends, being married, belonging to groups, having people who provide support are all factors which protect our health. Having social support is tied to cardiovascular disease incidence and to recovery from heart attacks. Even the immune system responds positively to friendship. Unfortunately, childhood stress and early adversity can affect people throughout the rest of their lives. An epidemiologist, Kawachi and his colleagues found a strong association between inequalities and social disengagement from social capital such as voluntary organizations, church groups, unions. The higher the group membership, the lower the death rate in the Kawachi et al study. The people who disengaged reported that they saw others as ‘out for themselves’ and reported less social trust. Robert Putnam found that social capital in States was correlated with high income equality too.

A Pathway From Social Stress to Illness.

Class differences in frequency of heart disease and life expectancy point to a common factor associated with income inequality: social stress. R. Sapolsky, in his article, “Sick Of Poverty.” explicates a well evidenced theory that stress translates into illness via damaging biological pathways. The adaptive fight-or-flight response becomes pathological when it is triggered on a chronic basis.  The damage can lead to weight gain, diabetes, hypertension, heart disease. Chronic stress responses can suppress immunity, lead to growth failure in children, ovulation failure in women, erectile dysfunction in men and digestive problems. Cognitive functions like memory can be impaired and risk of depression may increase.  Sleeping may be affected and a person can become depleted.

Unequal societies are almost always unhealthy societies say researchers, Wilkinson and Pickett. Sapolsky’s theory is supported by animal studies and suggests that those who become sensitized to stress response get very sick. Sapolsky writes of those who are most vulnerable,

“An extensive biomedical literature has established that individuals are more likely to activate a stress response and are more at risk for a stress-sensitive disease if they (a) feel as if they have minimal control over stressors, (b) feel as if they have no predictive information about the duration and intensity of the stressor, (c) have few outlets for the frustration caused by the stressor, (d) interpret the stressor as evidence of circumstances worsening, and (e) lack social support for the duress caused by the stressors.” (quoted from ‘Sick Of Poverty’)

The more unequal a community is, the more stress those who have less will feel in their relative inability to live as their better off neighbors live. The higher the level of income inequality, the deeper the cognitive and emotional trough is for those who feel subjectively poor compared to those who are well-off.  Position in society matters.

But this situation is plastic and malleable. Consider acute experiences of social equality. When WWII imposed an egalitarian economy in the U.K., everyone had a job and everyone had a ration card. Life expectancy in Britain increased by 6 and 7 years for men and women; twice the increase than in decades before then. Working class incomes rose by 9%, middle class incomes fell by 7%, poverty was halved. Crime rates plummeted. Everyone’s health and life expectancy improved.

Seeing what full employment can do and what adequate nutrition for everyone can do, what is our excuse for not bringing greater income equality to everyone?

All of the references used here are sourced from Wilkinson & Pickett’s book: The Spirit Level: Why Greater Equality Makes Societies Stronger.