The goal of this post is to lay out some of the basic arguments for paying attention to income inequality as a central and dynamic factor in social and health problems in America. We have seen that after a certain level of affluence or growth has been achieved that overall national life expectancy levels out, or tops out. Even though life expectancy increases in every modern, democratic affluent society following increasing incomes, at some point LE levels out and does not increase any further. There is also a level of income in each society which once reached does not allow for an increase in the level of estimated happiness even though income might keep increasing.

In America, we also see that LE or Life Expectancy is greater for those in the upper half of income groups and much lower for those who are part of the bottom 50%.  For my age group, it appears that affluent citizens will live seven years longer than those with lower incomes. See the CEPR paper on this here. (Thank you Dean Baker!!) In very poor America, life expectancy can be as much as ten years less than the national average.

The List of Social Problems related to Income Inequality through statistical correlation are as follows:

Wilkinson and Pickett found that the most difficult social problems of poor health and violence were indeed more associated with life at the bottom of modern societies. However, the above list of factors were found to be more frequently found in more unequal societies, and not just in the lowest, poorest income groups. The amount of inequality between income groups in unequal societies created higher levels of social and health problems for those societies when compared to other more equal societies. 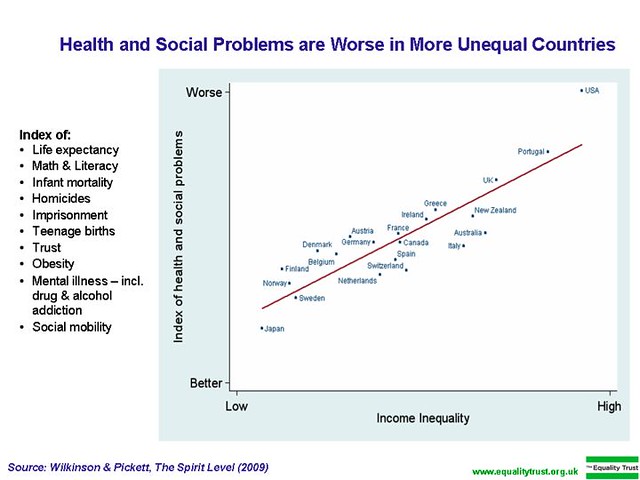 Objections to the data are typically along two lines at this point: First, people say that people at the bottom have more problems because they live in worse circumstances. Second, people object and claim that people at the bottom are prone to problems which drag them down. If the first claim was 100% true, then we would not see that in affluent countries like the U.S.A., where there is great inequality, worse frequencies of social and health problems. If the second claim was 100% true, then we would not be able to explain why more unequal societies have more problems overall. Self-sorting would keep constant the frequencies of problems across equal and unequal societies.

What seems to hold the data best is the theory that where we stand in relation to others in our society is what matters. That when the scale of material differences between people in each society grows too big, is too far and too wide; that it is the pressure to keep up for all of these disparate groups which contributes to the listed social and health problems.

Wilkinson & Pickett found that extremely unequal societies tend to perpetuate social and health problems and to treat them as unrelated to matters of income and class. The researchers consider the recreation of these problems in generation after generation as an expression of factors related to inequality such as how hierarchical a society has become. They see that where income differences are bigger, social distances are bigger and “class” stratification more rigid.  Whereas the researchers had been looking for a magic connection between poverty and ill health,  they found powerful social hierarchies, expressed as an extent of income inequalities, spread out across whole societies. These material inequalities become the framework for cultural narratives to be constructed; and these narratives reinforced class distinctions, class rigidities, defining “superiority” and “inferiority” as rigidly as any caste system.

The authors have had to reverse their earlier thinking about how to reverse public health problems. Initially, they appeared to discount income inequality as trifling over meaningless differences during a crisis; saw themselves as Emergency Medical Technicians at the scene of a bad crash and believed that all energies should go into stabilizing the traumatized. Now they believe that most of society’s ills are so connected with income inequality, that this is the primary factor to investigate whenever there is a spike in social and health problems.

Wilkinson & Pickett are the authors of The Spirit Level: Why Greater Equality Makes Societies Stronger.

The slides above are the property of www.equalitytrust.org.uk and are used with permission in order to facilitate a better understanding of the structure and impact of income inequality.

Why the left shouldn't label Francis Grady a "terrorist"